Vrokk, Isle of the War Wizards

I was talking to Anders about the Goblin Market and how after a while it doesn't take too long to make up content for a place once you get its "voice"--how most GMs invent little pocket-worlds they can, over time, learn to easily occupy, mentally.

These blog entries keep track of accumulated lore and developments, but they also work almost like a spell before GMing. I read through and by the end I'm there, and I can act and react like that place when I have to run a session because I go to the right headspace. 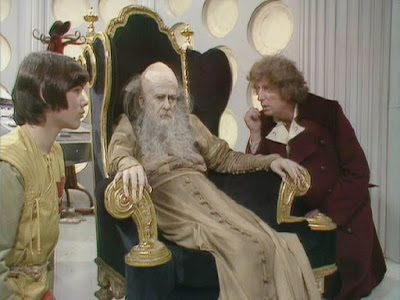 Nominally ruled by Queen Jayeleene, whom the player characters rescued from Royal Fist Monkeys long ago, Vrokk is, practically speaking, a clutch of feudal magocracies.
The extremely vain and jealous queen has become increasingly eccentric, demanding all powerful women on the isle wear masks. They humor her.

The most powerful War Wizards of Vrokk are all equally subtle or inept, for, despite near-constant intrigues, the political constellations have barely shifted in the last century, save for the disappearance of Cyanotica Bast, whose arcology was then occupied by a demon of sloth named Anaxorchas.
There are rumors that Anaxorchas planned to overrun the nearby arcology of Nithrinn Poxx but so far this hasn't happened. Nithrinn Poxx has been behaving strangely--no less abritrarily than usual but somehow a different flavor of arbitrary.
Clarissa of Oog and Hargen the Insidious have both long resided in the city of Vrokk itself. 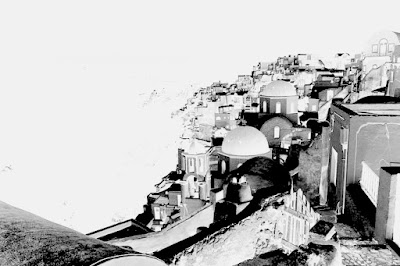 Hargen has recently developed a passion for Yoonish cloud pheasant, and has been eating nothing else and done nothing else but eat for the last 17 days.

No-one is sure quite why Vrokk attracts so many powerful magicians. Some say there are things buried beneath it, deep in the Cube, where the earth communes with itself in cthonic meditation relaying endlessly a tale of itself to itself and skin between the real and the dreamt is stretched like skin over the wide mouth of a deep drum.
What you do in Vrokk is hexcrawl between the wizards and their wars and their scheming. They're great for inscrutable assignments.

-The adventurers need to locate a rottweiler. The dog is a witness to a territorial violation by a swallow acting as familiar to Nithrinn Poxx. The dog's wandered into a zone wracked with a spasm, which contracts and births hybrid moths which seek high office in Vrokk and, mistaking the rottweiler for an important official, have captured it and are at attempting to interrogate it.  Nobody has "Speak With Animals here so it's all a pill.

-The upper reaches of a flooded cathedral on the coast has been repurposed as a dock for Queen Jayeleene's fleet in its campaign against the Rogue Traitors who seek to plunder and harry the isles. The problem is the vicious sea elves infesting the cathedral's lower reaches. Something about repatriating a relic? And totally of course one of the other wizards is helping them just to be an asshole. 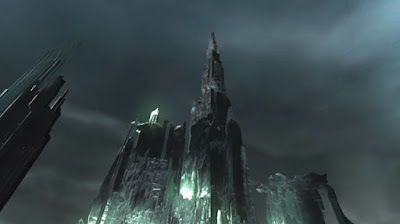 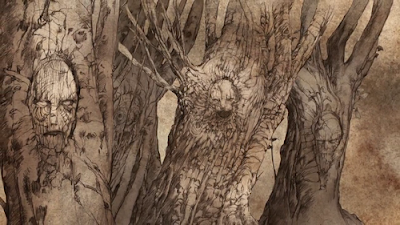 Vrokk is not natively exotic, but exotic things are done to it. The landscape is sporadically metamorphosed and beaten, its disrupted geography bears old scars--things unimagined grow in the spaces between watchtowers and armies. 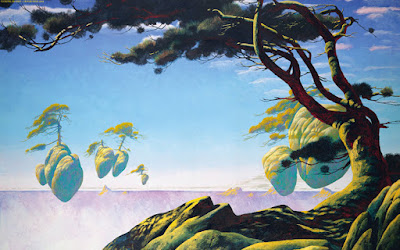 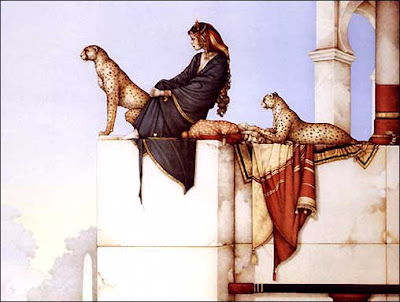 The culture is languid, advanced, coded, suspicious, brittle, and tolerant in the lazy way of places where no one really likes anyone else. Everyone's mind idles on some distant plane or awful future dream of violent conquest. Sensitive visitors find themselves trying not to offend the sorcerers with their vulgarity until they realize everything does. Talking, eating, breathing--all necessities form a kind of painful background static to the War Wizards, not least because it reminds them of all the realities they have themselves yet to transcend.

The mighty War Wizards eye your party from godhood's lobby, wondering how best to use them to shorten their wait. 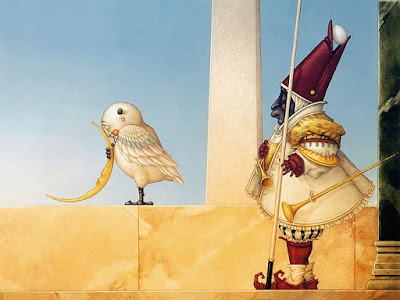 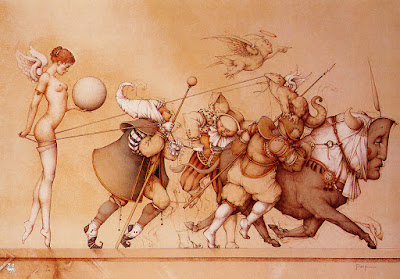 The culture reminds me somewhat of Melnibone, and the "godhood's lobby" sentence is brilliant.

... Or the Gliders of Blue Mountain

Disbelief in or terrified of children (they stopped breeding millennia ago)
Contemptuous of yet fascinated with human variance and mortality
Immortal Wizards are so full of ennui they volunteer to serve as highly specialized mindless continuous magic effects (opening a door, levitating a meditation egg, bracing a weak strut...for the rest of their lives)
Mind boggling architectural art and design that doesn't respect the needs of puny people who need to actually walk.
Self modification to the extreme - animalistic forms

"Something about repatriating a relic?"

A relic? Could very well be. But, I am willing to bet my eyes that they are after the baby who is cemented in the cathedral's uppermost pinnacle. Or what else would cause the wailing sounds in the morning mist?