Third in a series...

Ok, so the good (or at least passable) bits of the classic old module Ghost Tower of Inverness are...

-The illusory ball that seems to kill you but doesn't

-A force field at the end of the adventure that you have to destroy bit by bit, but hurting it also proportionately hurts you

So what can we do with only those bits?

Basically we're remaking this guy as a  '70s Dr Strange-style location. It's a one-shot funnel dungeon with some gimmicks. There's a mcguffin (The Jewel of Masterful Perspicacity or whatever) defended by an imprisoned guardian who lives inside a pocket dimension in the tower. 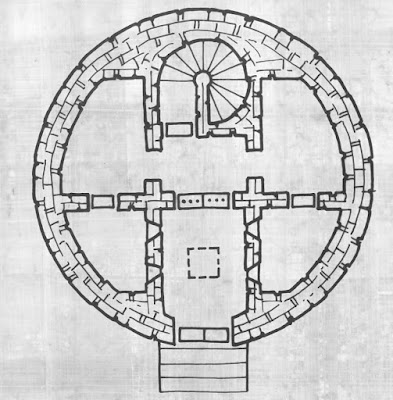 The front door closes and locks automatically once you go in and can't be used again until the door out of the final room is opened.

Describe these places as spooky. And in each of these rooms we have a monster. Something ghost- thematic like a banshee or an animated object. Also, we have a giant rolling ball that comes down the stairs and crushes whoever goes onto the stairs. Maybe add some grounds around it with more monsters if you like. The 4 pieces of weird metal that form a key are hidden on this floor.

Here's the thing about these monsters and the smooshing ball:

When these things "kill" a PC, the PC is transported to the second level of the tower.

In play, everyone will accuse you of being really unfair for a few seconds, until you tell whoever died that they reappear in a room with squares on the floor.

Each person who "dies" ends up in a different one of the perimeter rooms here: 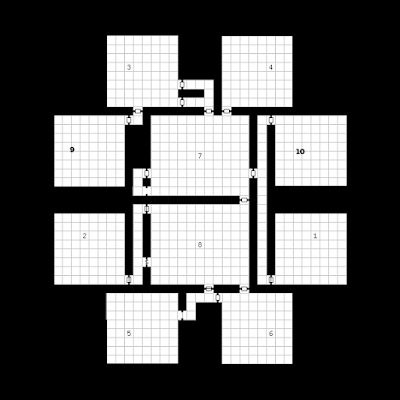 Anyone who "lives" and gets up the stairs ends up in room 8. The door seals afterward and there's no way back down.*

This map is not a traditional map: all that black space isn't stone, it's a sea of lava. This is more an arrangement of platforms than rooms.

Every room here on the second floor has checkered floor tiles.

On platform 7 there's a fire giant (or fire demon, or spiky lizard-turtle boss, or whatever)--an imprisoned angry guardian presence is the point--that hucks rocks at you. Each time it rolls a miss or rolls max damage on at least one die, it puts a big hole d4 squares in size through a platform. There's lava there now.

Also: there are fire bats that try to take your stuff, knock you over, and set you alight.

In addition, anyone who "died" on the first floor appears on their platform on one of the extreme edges in the place a rook, knight, or bishop would start appear on a chess board. If they don't move like their chess piece, they get zapped for some amount of damage that won't kill you in one hit if you're healthy but that you will regret. (Scale to taste.)

The "doors" on the map aren't doors--they're (hidden) anti-gravity columns. You'll fall up until you hit the ceiling (60 feet up) unless you manage to twist out of the column, in which case you fall down.

The giant boss has a magic field around it--it is only vulnerable to melee attacks and doing damage to the field does damage to you.

Because of the movement restrictions, it can be impossible for a given PC to move traditionally toward the giant--if another, unrestricted or less-restricted PC moves them, they are ok, also it is possible to do shit like build a bridge out of debris. Flyers must follow the paths as well.

Killing the boss exposes the mcguffin hidden in its heart. The only way out of the tower is through a hole in the ceiling. The 4 pieces of metal from the first level interlock to form the key.

Optional extra--when you leave the tower you're in the past, and going back in and then out the front door returns you to the present.

*EDIT: Someone points out this means you can get stuck up top forever if you don't collect all 4 bits the first time. Ok, so the door back down to level 1 re-opens if you kill the boss on level 2.

Oh this is lovely.

Neat. But what if the characters get "killed" before finding the key pieces? (Or they ignored their significance and didn't bother keeping them.) Seems like they'd be SOL.