Are you still here, Ghost Tower of Inverness? 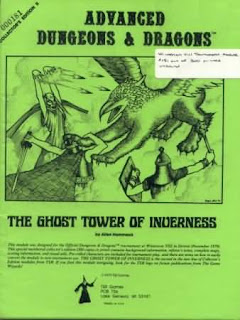 Yeah ok. So, anyway we've got past the outer ruins and are now into the inner tower of...

Yes. That. So what's first?

Whoa who could have thought of that? So: Air Level?

Yes, on the air level a sphinx attacks the party from a mist!

No just it hits you.

Do you see this palm I have on my face right now?

Also maybe after that a pteranodon.  Unless it's a tournament.

No pteranodons in tournament mode.

No! And then the Earth Level...

Do you stand on a boulder and someone throws a rock at you?

An overly-muscled monkey suddenly lands on one of your group!

A muscley one! While in trees!

Then there's a medusa!

Yeah ok, it seems like there'd be a lot of stone over-muscley monkeys in this forest.

Especially if it's been there since the age of forever when the peaks were...whatever it said in the intro.

Girding for this shit.

There is a looping stone path across an ocean of flame that you must traverse while a flame giant hurls boulders at you and firebats attack. Also there's a reverse-gravity trap in the middle.

Whoa it's like you put all your effort into this one room and then Super Mario just went and stole it out from under you.

Also the stairs behind the giant aren't real stairs and you have to use the anti-gravity well to get up to the next level.

You fall upward into the chimney and appear beneath the waves in tropical surroundings!

Those are the ones.

And then, beyond the xitxachitl lair..

The wonder of the Soul Gem!!

Wait so there was no ghosts in the ghost tower?

Does the Gem fuck with you?

How?
Totally random zaps that if they hit you they take your soul.

It is also surrounded by a field that inflicts equivalent damage on you as you chip away at it.

Yeah. Next up: Rewriting this so it doesn't suck.

Rewrite it how? The only thing worth keeping is the name..!

I've been reading these and laughing at how the nostalgia in my mind makes old things better than they ever were.

Really looking forward to your hack of this module, Zak. Rock on.

Dropped just the tower into a sandbox game I was running in Pathfinder. Resorted the levels to keep OG players guessing and made the top an observatory. The elemental levels were to keep the riff-raff from bothering the wizard whose tower it was.

I like to revamp old modules and use them in my campaign. The Ghost Tower is currently feared by my players as it is the source of our first TPK (when the rickety ceilings in the lower tunnels collapsed after using a fireball). I always wondered, even as a kid, where the ghost was in the Ghost Tower. I decided to make the tower itself the ghost. Now it only appears and can be explored on the blue moon. Any other time it is just a pile of rubble (that happens to cast a tower-shape shadow at sunset). Anyway, looking forward to seeing the changes you make!