When we last left our heroines, they were stuck in the Red & Pleasant Land version of The Gem Prison of Zardax. 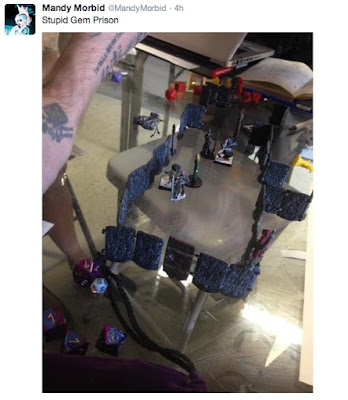 So using Legend Lore, Mandy's sister figured out the symbol on the floor of the square room...
...meant you had to rearrange the rooms in the dungeon until they matched that pattern in order to get out.

Because in the Gem Prison of Zardax: (highlight for SPOILERS)....

The doors lead to a different random room each time you close and re-open them.

One room had the sphinx in there--blinded with magic sapphires by forces unknown.

Another had a secret door with 12 vampires behind it. As well as an altar to the Red Hand of Tiamat with a pair of ruby chalices.

Karolyn, who spent last session playing and losing two of the other players' pet dogs and pigs becaue her own cleric was temporarily out of commission received an apposite fortune... 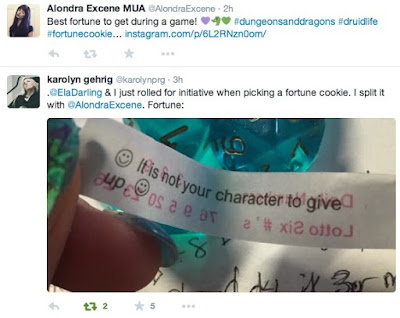 ...and made a new character--an Alice.

Just as she showed up, a horde of high-on-fire dwarves showed up, setting everybody's stuff on fire...

After they were dispatched but before they finished the shape and escaped, Karolyn decided to see what happens when you drink fire-dwarf blood from ruby chalices.

She immediately became a zealous adherent of the Red Hand. Though a Remove Curse was dropped on her forthwith, she didn't walk away normal...

So that's a whole thing.

Just got my Copy of Red...Amazing-Zack's imagination is just amazing
While I love my D&D group these are the cool kids I wish i gamed with...