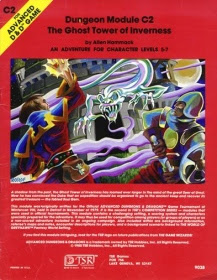 Oh my god, it really is you, the dread Ghost Tower.

Yes, it is I, Module C2 conceived for the Wintercon VII tournament in Detroit in 1979, copyright 1980!

Fuck me in half.

Know you that in the elder days before the Invoked Devastation and the Rain of Colorless Fire, when the ancient peaks of the Abbor-Alz still thrust skyward sharp at majestic, there existed between the Bright Desert and the mount of the river Selintan a great fortress called Inverness....


White Dwarf once gave me an 8 out of 10 and Dungeon ranked me 30th best adventure of all time!

Fuck you and fuck your Deep Carbon Observatory.

Can I help you? 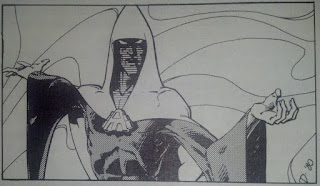 Pull back my red and Roslof-clad covers. You are in me!

And second the You-are-in-me joke was played out this time last year.

It is a gem of inestimable power!

Dare you enter my upper works?

That's it? No "Disguised as a frustrated lady of the Sodden Provinces bearing beechwood wine who beseeches the party for aid in locating her lost children?"

It is ferocity incarnate!

That is the stupidest thing

Fuck anyone who uses a giant ant I don't care how many panels you've been on.

Why are a bear and the devil on the same chart?

Dare ye face the horrors on the second chart?

That depends, is it gonna have a giant badger on it?

Let us skip to the room descriptions....

Yeah ok but not the empty ones.

The room has 20 squares. If you step on six specific ones, one of six monsters will appear.

It is not more complicated than that.

Yes! One of the monsters that might happen is a leucrotta!

Well here it's wasted because the only good thing about a leucrotta is when you first hear it in another room because it is a creepy monster that can do a human voice and so you think it's a baby. 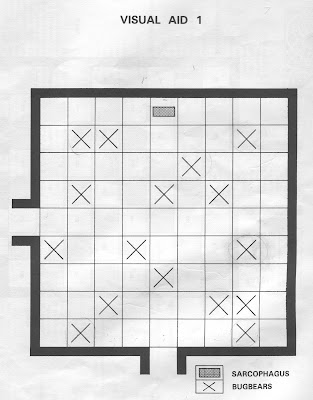 If you step into the room, a given number of inanimate bugbears will animate!

With mighty fists! They are unarmed.

In the picture he has a club.

And, consider this: if more party members enter, more bugbears will animate!

A manticore that hides.

I knew you were going to ask me that.

There is a giant ghost ball!

It runs over you. You're fine but all your friends think you died, because of the power of ill-yoo-zee-unn.

That's kinda cool. Why does that happen?

Just, no reason, like: it happens and then you figure out it happened and then keep going when the guy's like "Hey I'm not dead" and then you notice, illusion over.

I mean...there could be a wandering monster during that and that'd be fun.

A lot of balls here.

After four are triggered it's over.

Including the same ones twice?

So it's not really a puzzle either?

One of them is an owlbear!

In the next room...an umber hulk attacks. 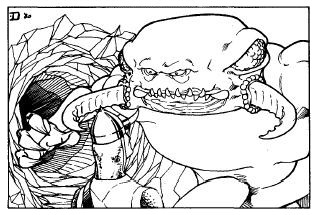 I am electric eeling with shock over here at the unexpectedness of that shit.

But only if you spend more than one round in the room.

Hey girl are you the Sixth goddamn Sense because I have never seen such a twist.

Do you know what time it is? Anyone?

...The Guess What I'm Thinking To Get Past This Beaded Curtain, Then When You Do You Are Surprised by Ogres Bugbears And Gargoyles Who Will Hit You Room!

So this is basically just hazing at this point, right?

Ok, so it's no Lyonesse, it gets better though...

You appear on a square on a giant chess board and have to move around like the chess piece you appeared in the starting position of or else get zapped.

Thank you, chess gimmicks were all the rage in Detroit in 1979.

I like that, for once, it not only has thematic resonance but ways to figure out how it works other than by sheer trial and error.

Yes! Also the squares that should be white are grey, blue, green and yellow!

What does that do?

Now, to access the door leading to the Inner Tower, the party must collect four disparate keys!

Total hack trope. Do they have to collect a tough-talking orphan with a heart of gold, too?

It's in Red & Pleasant Land.

Except...in the Ghooooost Toweerrrrr the keys do not look like keys at all! Only once assembled in the proper arrangement do the keys match the sigil that marks the entrance.

Aha! There's that AND the chess puzzle AND the ghost ball--might you mayhap be falling under the spell of the GhoooOOOOoooost TowerrrrrrrRRRrrrrrrr?

Uh....can we finish this tomorrow?

Of course, the Ghost Tower can wait...(shrill giggle)

Sure. To be continued, Ghost Tower. You stay right there.

Love the disassembly of a classic module that, in all honesty, has a far better title than content!

I read through it recently myself and found the puzzles uninspiring and the symmetry of the dungeon dull. The fact that the party has to go through all four entrances and find the four key parts in a different section all of which connect to the room that leads to the tower proper is so uninspired. Just think, all that backtracking is great to make use of that fabulous random encounter table... ugh.

Shawn Sanford ran this on his Thursday nites game with us using the included tournament characters. Even with a full boat of all the characters it was pretty rough going even just outside the tower itself before we got "inside".

Shawn Sanford's games are always kick-ass. He can make any old module sing

This module sucked. But a wizard's tower is the ultimate DM nut to crack. Such a basic trope, and players are dying to loot a difficult target. It shouldn't miss. I wanted to love this module soooo bad. I hate when a corpreteeeee product leaves standing at the bus stop with incorrect change.

The different colors on the chess puzzle made us miss the fact that it was a chess puzzle and we got badly sapped until we all levitated across it or something.

I've been to Inverness, never once saw any of those wandering monsters, is the ghost tower invisible?

Thank you for a very, very entertaining read! Also love your Caves of Chaos on the map itself.

I recall reworkigt he heck out of this and beefing up the soul gem...becasue: "SOUL GEM"