The World That Fit In Scheherezade's Head

"I find herein a wonderful beauty," he told Pandelume. "This is no science, this is art, where equations fall away to elements like resolving chords, and where always prevails a symmetry either explicit or multiplex, but always of a crystalline serenity."
--Tales of the Dying Earth, Jack Vance

"Decorative" is a loaded word in art history, and--considering what art actually is--is hard to define. It has something to do with there being more colors and shapes going on than ideas (and stands on the opposite side of the tightrope from another vague and loaded word--"illustration"--which suggests an image where there's nothing but ideas going on).
Drawing a clean distinction between what's "decorative" and what isn't is hard because different viewers are going to have different notions about how many ideas they're looking at in any given object. I, for one, am not sure I've seen anything "purely decorative"in my life. 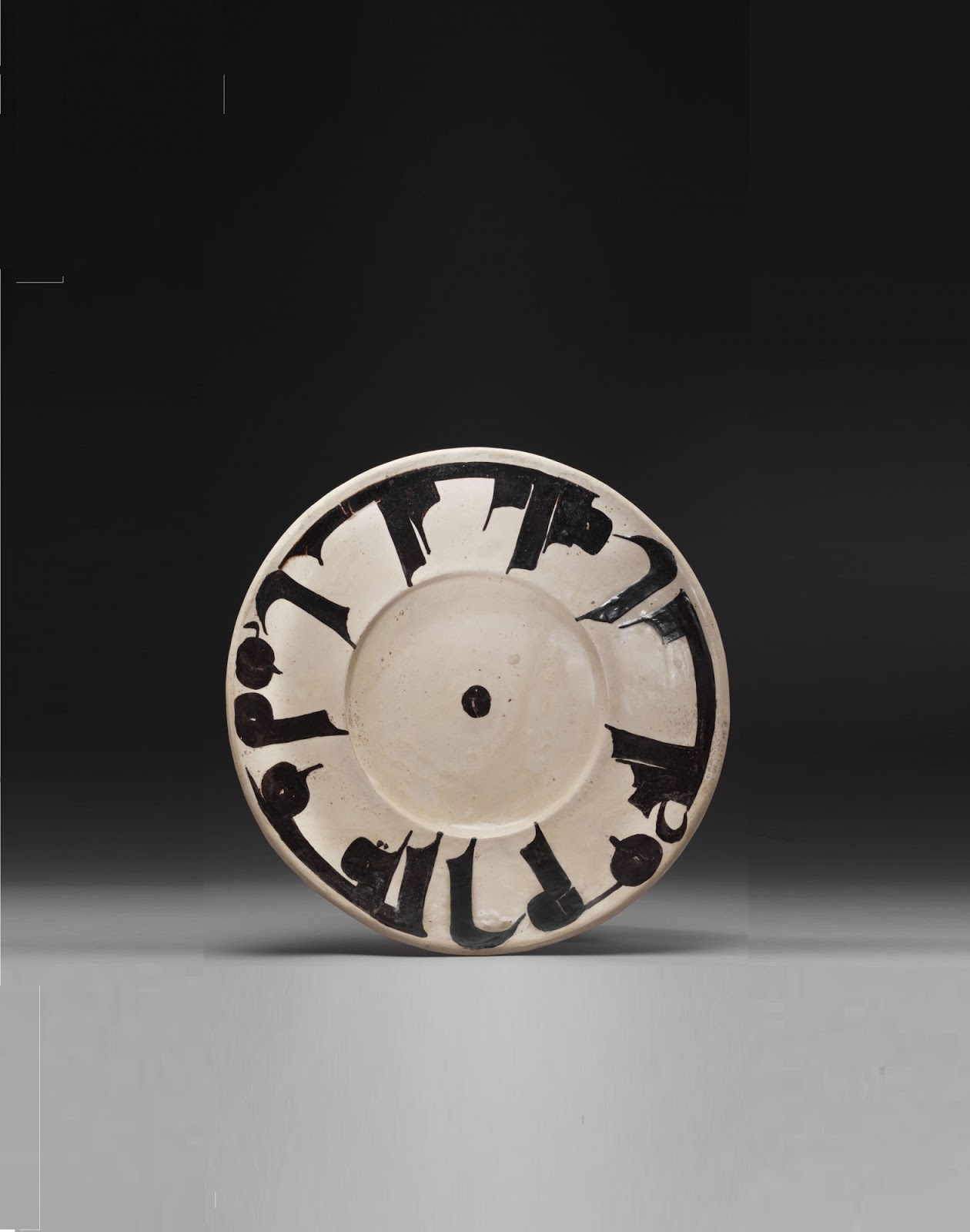 The problem is pushed to the foreground with the art of the Islamic world because--depending how you look at it--either it's almost all decorative or none of it is. Or maybe everything religious isn't and everything that isn't religious is--even when they're done by the same artist in almost the same style. Or something. It's hard to say and better, probably, to just look.
While the Western tradition addressed ideas mostly through illustration and story ("here's St George killing a dragon") in the various Islamic civilizations a different creative direction took hold.

Point is: the most common way to express stories and ideas was through calligraphy. Taking the overt content--words--and imparting beauty and perhaps new shades of meaning to them by how they were written. 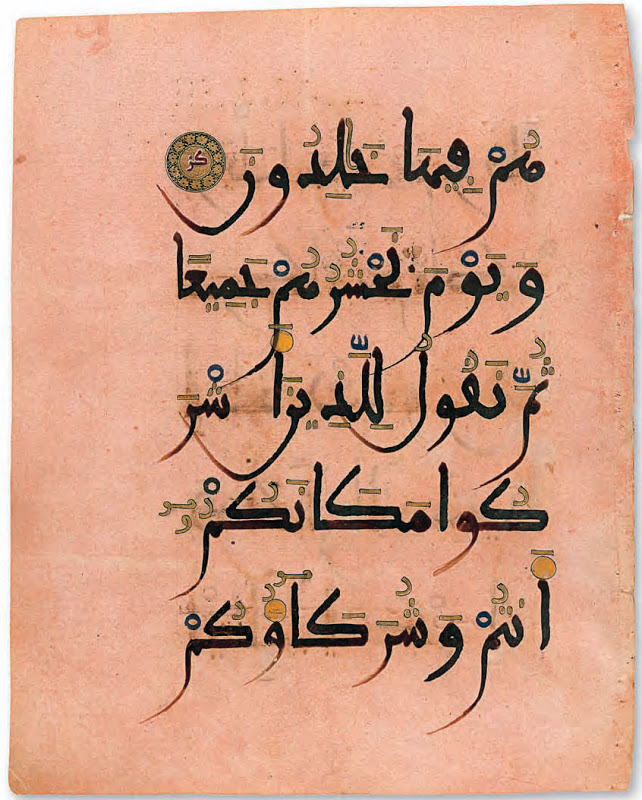 Both the line and the ethic of calligraphy (take a known and legible thing, beautify it with strict attention to geometry and proportion) influenced every single other art form in the culture. The mosques often have calligraphy worked into the reliefs, the paintings have a pictograph-like line, the metalwork is done in dense script-like meshes of vegetal designs.

Here's what I particularly like about this from a D&D perspective. Consider Jack Vance's Dying Earth as quoted by Jeff:

Turjan found a musty portfolio, turned the heavy pages to the spell the Sage had shown him, the Call to the Violet Cloud. He stared down at the characters and they burned with an urgent power, pressing off the page as if frantic to leave the dark solitude of the book.

Turjan closed the book, forcing the spell back into oblivion. [...] Then he sat down and from a journal chose the spells he would take with him. What dangers he might meet he could not know, so he selected three spells of general application: the Excellent Prismatic Spray, Phandaal's Mantle of Stealth, and the Spell of the Slow Hour.

And consider Jeff's comment here: Spells are almost alive with power. Memorizing a spell is kinda like putting a demon in your head. Something similar could be said of a prayer--a prayer is putting a spark of the divine in your head--or into whatever you're painting it on or carving it into.
And D&D wizards are always writing spells down, and in old editions you could even write it wrong and memorize it wrong. I like the idea that writing things down is encoding them and  binding them into the thing. While calligraphy was esteemed almost- or just as- highly in Japan and China, it didn't have the omnivorous quality of Islamic calligraphy, taking over walls, plates, doorways. 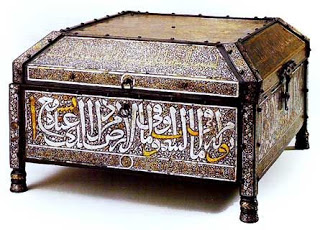 There is something almost gnostic in this: the world and everything in it is just the expression of something else happening in another, higher reality. All our world's objects and pleasures are just a text about that higher world.

The architecture also has to be counted as a tremendous influence on the art--moreso than in the West, because of the art's inherently abstract and geometric quality, it's easy to find the forms of buildings reproduced on a smaller scale in the luxury objects and paintings. One theory holds that the "carpeted" look of these traditional walls descends from actual carpets--which the Mongols and other nomadic peoples' used as tent walls and which were and are still hung on walls for insulation and to, of course, tie the room together. 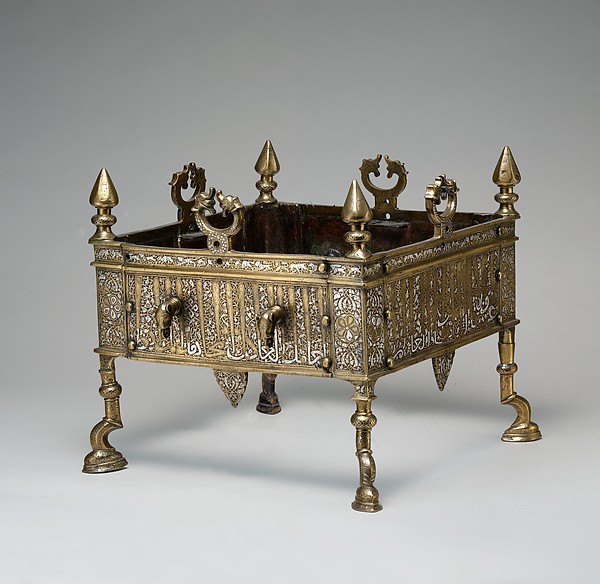 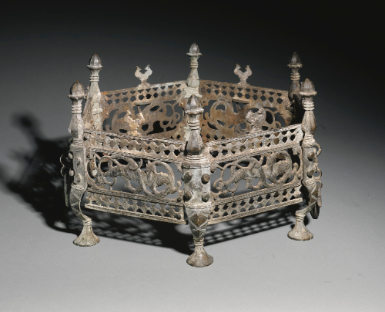 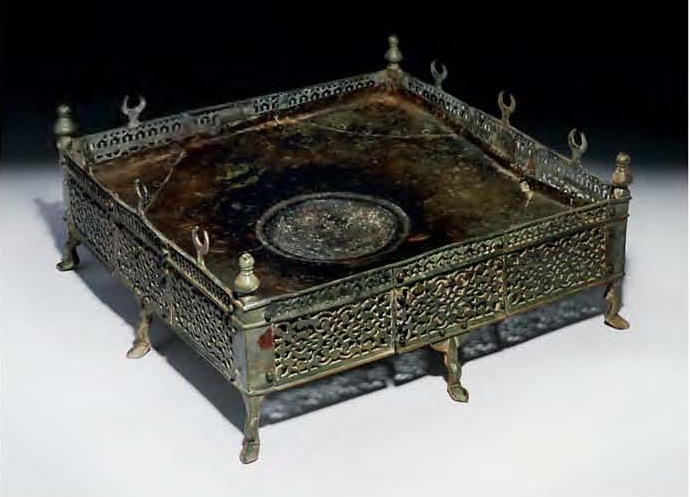 I think the colorful and monumental qualities of Islamic architecture are partially due to having (in a decent proportion of the very many countries which were ruled by an Islamic civilization at one time or another) a lot less foliage to compete with than the rest of us. Bukhara, for instance, gives the impression that if you wanted any kind of environment you had to build it yourself: 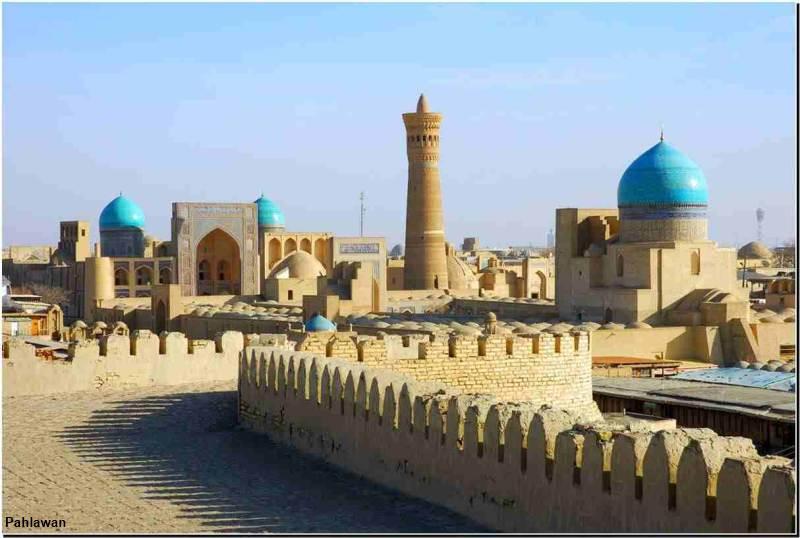 So calligraphy and carpets influence the buildings, and the buildings influence everything else. These influences have something in common: they're all things only people make. Nature plays a role in every civilization's art, of course, but it wouldn't be crazy to say it plays a smaller roll in the art of the Islamic world than in that of any other great world civilization. It appears as pattern and abstraction, but relatively rarely as a force in itself.
The lack of observed natural motifs adds an air of urbanity and artifice to Islamic art taken out of context that accords well with the kind of goatless cosmopolitanism in 1001 Nights-style worlds like Al-Qadim and the Thief of Baghdad. 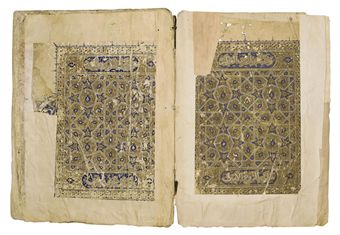 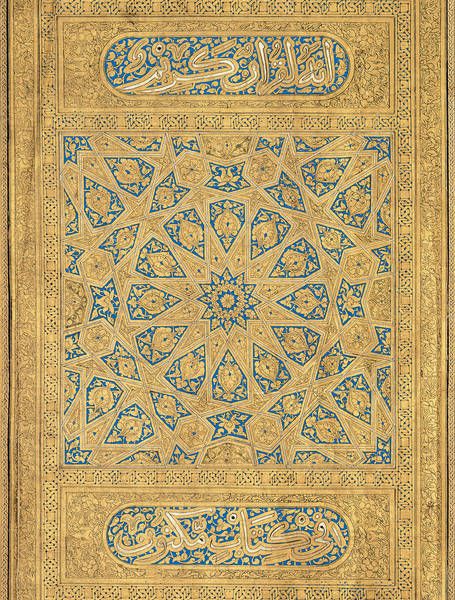 This painting, done in 1488 by the renowned Bihzad, features Zuleykha chasing Yusef through seven doors and is one of the most magical things I have ever seen: 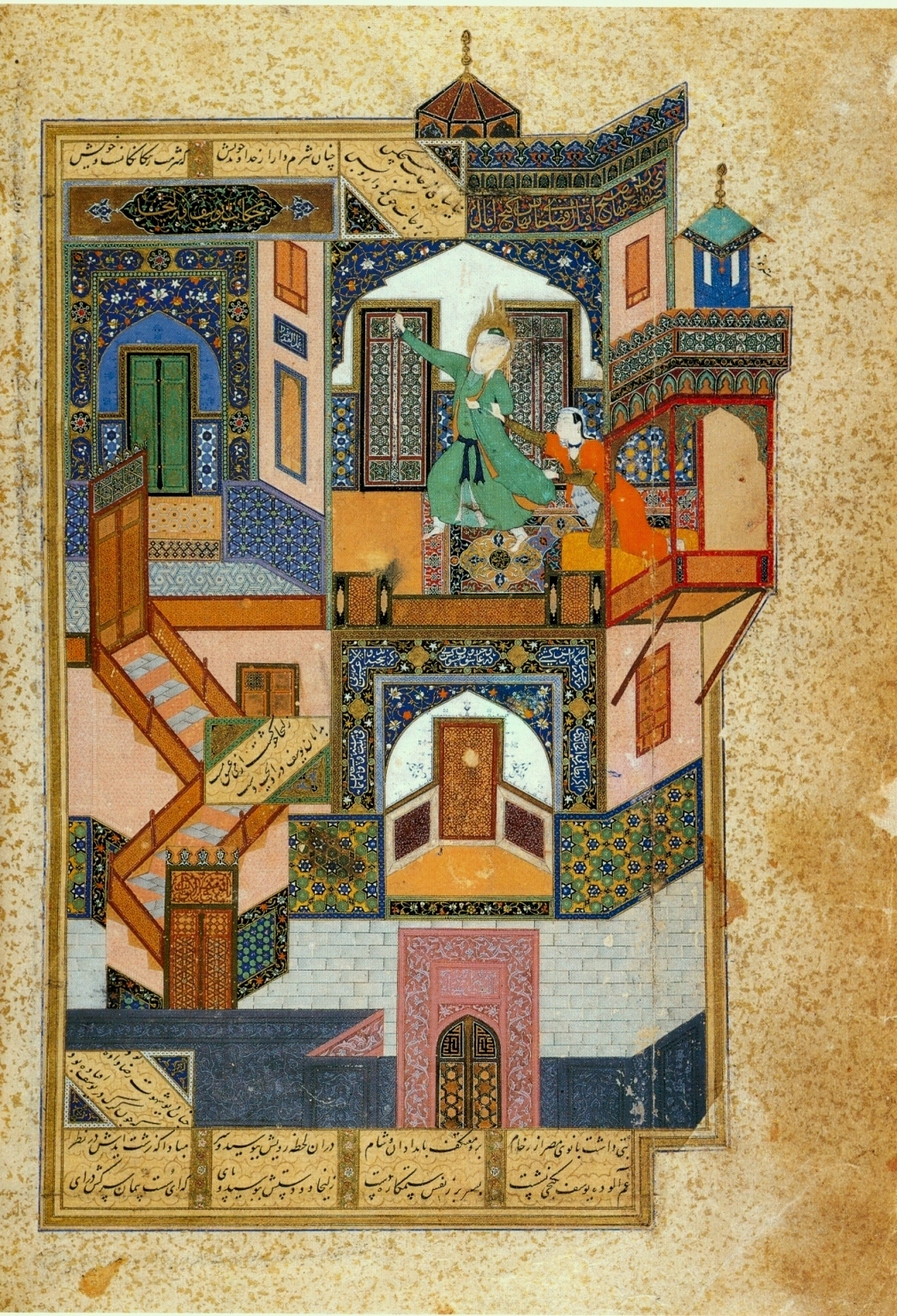 Note the totality of the artifice: no sky, no landscape, everything is civilized, abstracted, structured, lonely, symbolic--plants and stars are only present as the idea of plants and stars worked into the patterns. This is a true mythic otherworld maze, made of only psychological things. This is Julio Cortazar territory--hundreds of years before modernism.

Here is Bihzad actually taking on nature, with the typically Persian use of rich colors derived from jewelry, lustred tilework and textile design: 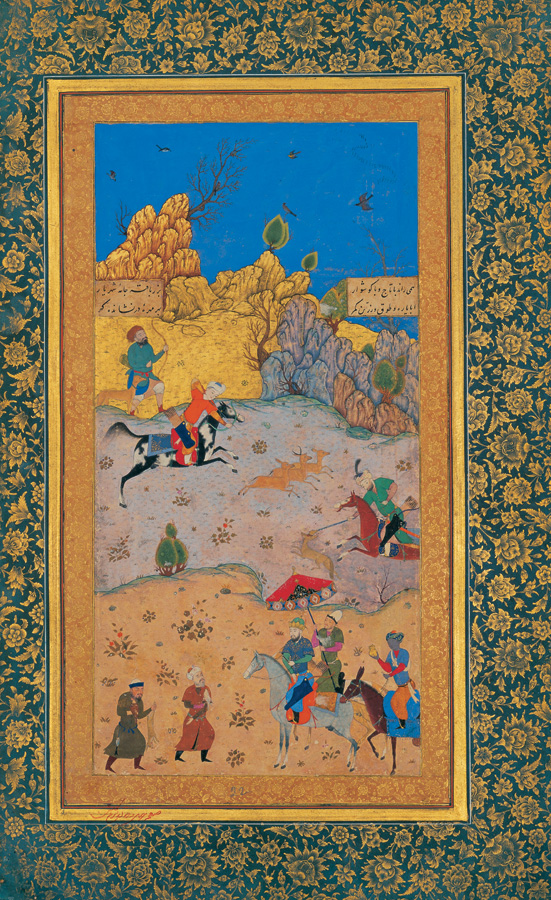 Mir Sayyid Ali came along a little while after Bihzad...
...I love how the food and wine float on that palace carpet like toy boats.

It's interesting to compare this battle scene to how a Japanese artist might have painted it. In both cases, the trees could be stylized and isolated, but the Persian painter has decisively and consciously transformed the tree into a beautiful symbol of a tree, whereas a Japanese painter would have given us some approximation of some seen tree.
The horses, though, have detail and distinction, no two quite alike--as useful war animals they belong to civilization, to the writer-like record of who and what was there. Compare this to one of Paolo Uccello's battles.

Likewise, you can directly compare this anonymous Ottoman portrait to the Bellini painting that inspired it: 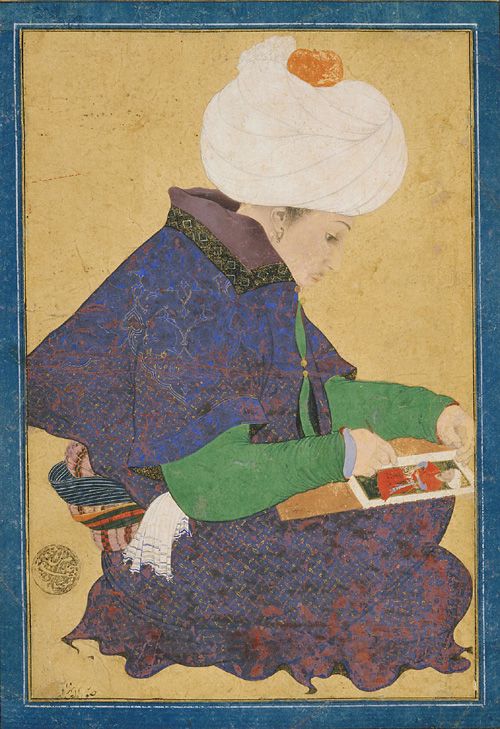 …while Bellini was worrying about how the light fell on the folds and the face and making it look like his painter was actually sitting on the ground, the Ottoman artist worked on recording colors and patterns--making the subject of the painting into a pattern.

And, taking a bite out of the other end of cultural appropriation sandwich, here's a Persian hero killing a  totally Chinese dragon...

Zak, you have to stop doing this, you destroy our un-cultured minds and elevates us into illumination :-)

I love Islamic calligraphy. It is so intricate.

Great article. I've been following for the D&D, but love your insightful writings.

Going back to your initial interplay of decoration and "something more", I feel that it is wholly dependent upon the person viewing. For Christians, the "art" of stained glass started as more than decoration. It was communication. It was proclamation. It was sacred. To the contemporary, outsider, it serves a totally different function. For the Orthodox, iconography is an active part of revelation of divine. For outsiders, it is bizarre and otherworldly.

The iconoclasm controversies over the course of Christian history have been a tragedy. Some amazing works of "art" have been lost. But also some of the means of communicating the greater message have also. The same is true in Islamic cultures in our time where there has been blatant destruction of ancient works.

It is a shame that while in the process of considering something "decoration" we can't respect those who see it as something more.

Check this out: The tughra (offical signature) of Suleiman the Magnificent http://www.bbc.co.uk/ahistoryoftheworld/objects/awykYG5tT-2zbY_SlZUufw

A few years back I enjoyed a short stint (a little less than a year) cataloging and appraising the massive (and ever-growing) book collection of a rather cracked Texan oil millionaire. One of my favorite books that I got to work with was a 17th-century Koran that, our research indicated, was most likely produced in India for the Turkish market. (It was later rebound sometime in the 1800s in Europe.) The whole thing throughout was gilt. Every. Single. Page. I remember the book weighed much more than you would think a tome of its size should.

I snapped a few pictures on my crappy phone camera:

Everyone should spend a month, at least, in the Middle East. It can really help your game, for all kinds of reasons.

Yes! Another post in this series! Totally loving it (again)!
The geometric shapes are awesome in Islamic art and architecture; the calligraphy yes, but also the tiles and the (wood) carvings. You just keep shooting pictures if you visit places like Alhambra. All the symmetries, and more importantly, the almost-but-not-quite symmetries. It is truly amazing how, say, a set of double doors looks symmetric, but actually isn't upon closer examination.

Zak, if you have finished this cycle of posts (and I hope it will continue for a while) may I suggest that you dedicate a post on 'the art of decay' and 'decay as art'. Think of the wabi/sabi concepts in Japanese art, the transience of things, but also how death and decay are pictured in (Western) art.

Inspiring material - I really appreciate you doing this.