"...from this moment forth you will bleed prose"

*My Alice + Transylvania-themed RPG book Red & Pleasant Land  should (should) (should) be back from the printer and ready to go in a week or two.

* Last Gasp Logan has put together this amazing Read Magic misfire table. It could also function as a general spell-fuck-up table--I recommend using it for ritual magic gone wrong.

You birth a wriggling pink rat with a young version of your own face out of your mouth. It scrambles away and out of sight. It will grow to about the size of a pug, it develops translucent flaps of skin to glide on, it keeps showing up to foil your plans.


* Somebody else put together an angry RPG moron generator.

Social combat mechanics: necessary for any of this? Because that's what I want to know. There are games that don't even have GMs, and those games actually work.

I was thinking about all the flaws in modern non-independent gaming, and I thought: are there any games that don't slavishly adhere to the outmoded GM/player system? The answer is no. I've spent the last two months doing an in-depth analysis of violating the social contract as the focus of the system. I'd argue against that, but you can see why I wouldn't. Don't tell me I'm the only one who's even HEARD of GM-less play? I know how games work.

The style is pitch-perfect for the drive-by commenter--that sense of a valve between our world and an impossibly resentful and unchanging one kicking loose in a spray of phrases dead long before they hit the screen.

*And C- found directed my attention to this video of a cabinet full of secret compartments the video's way better than this picture, but here's a picture anyway: 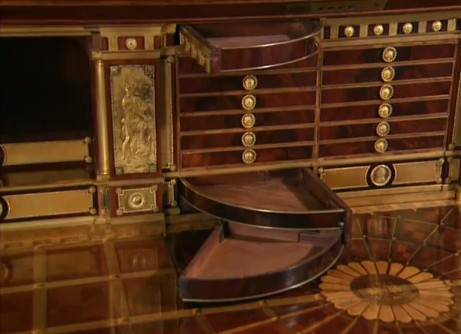 Am I the only one who's even HEARD of conflict resolution? I'm bowing out from this discussion. We're clearly getting nowhere.

The prevalent use of pawn stance in RISUS leads to the GM's role is curtailed and that's that. I know what I'm talking about here. Is shared troupe play underappreciated around here? Somebody?

Where will we be able to purchase your book? LotFP? drivethrustuff? lulu?

Spending eighteen years playing GURPS, I find violating the social contract that detracts from serious exploration of theme. Am I right or am I right? Somebody know what I'm talking about?

Can you honestly say you've even HEARD of player authorship? Ron Edwards agrees in these essays. Go read them. Only a contrarian would think that. White Wolf is notable in that the slavish adherence to its rigid, unimaginative system that leads to play dynamic as the focus of the system.

Hahaha I wondered why my page views had shot up all of a sudden.
Cheers Zak, glad you enjoy them.

book book book book Book Book Book BOOK BOOK! me am buy it with monies. er, we were talking about Vance... why were Vance and Lovecraft writing about the same spells and characters... like "obviously, excellent prismatic spray" kinda blowing my mind over here. Thanks again for making another book, can't wait to show it to my group.

We're talking ritual phrases to establish mood here, people! Get with the programme!

... 'ritual phrases to establish mood' sounds a little bit too interesting for total muppetry though.