5th edition armor classes don't line up with AD&D/Labyrinth Lord armor classes, plus I can't remember any of them anyway, so I just had Connie tattoo them both on my forearm. 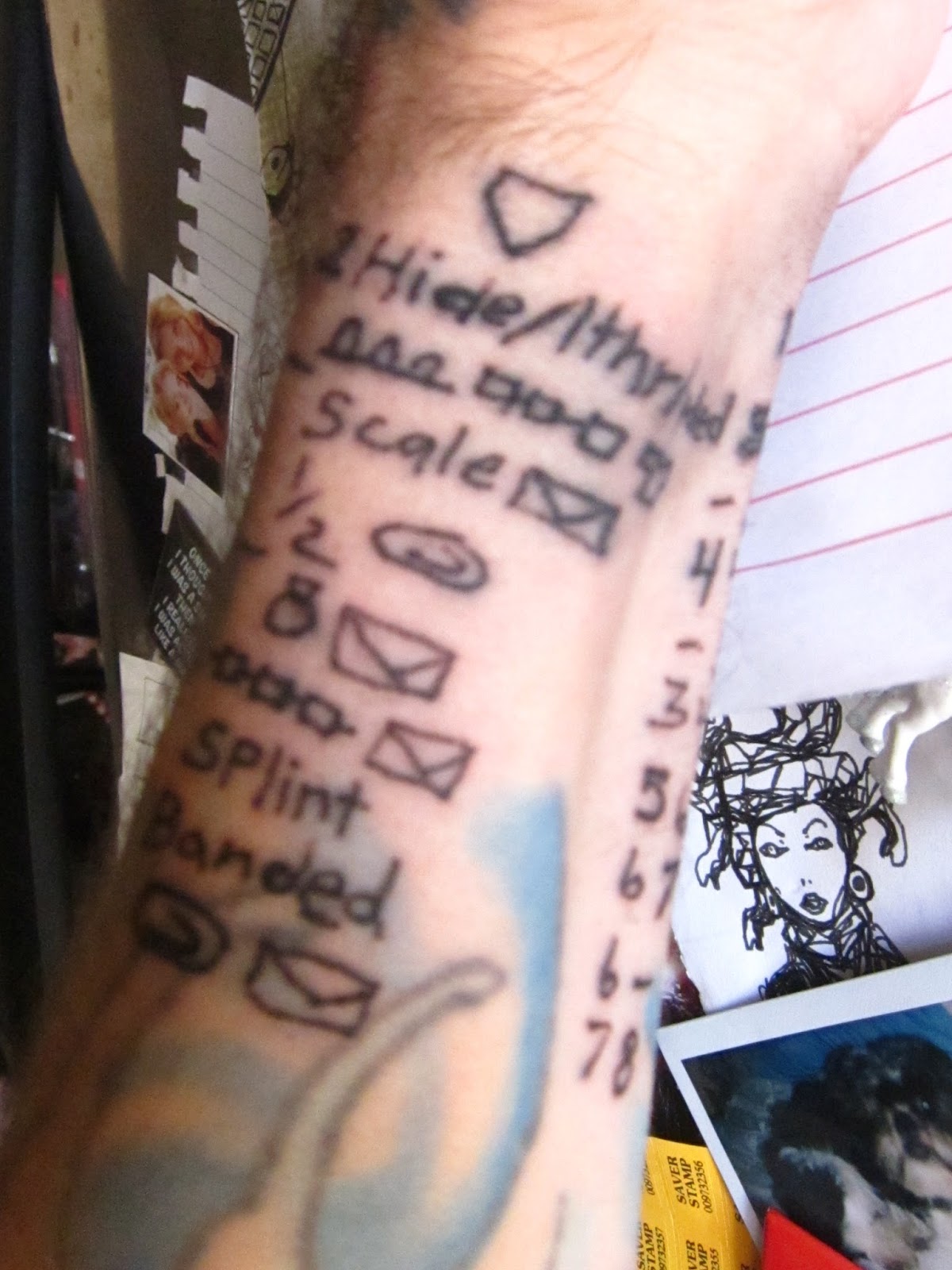 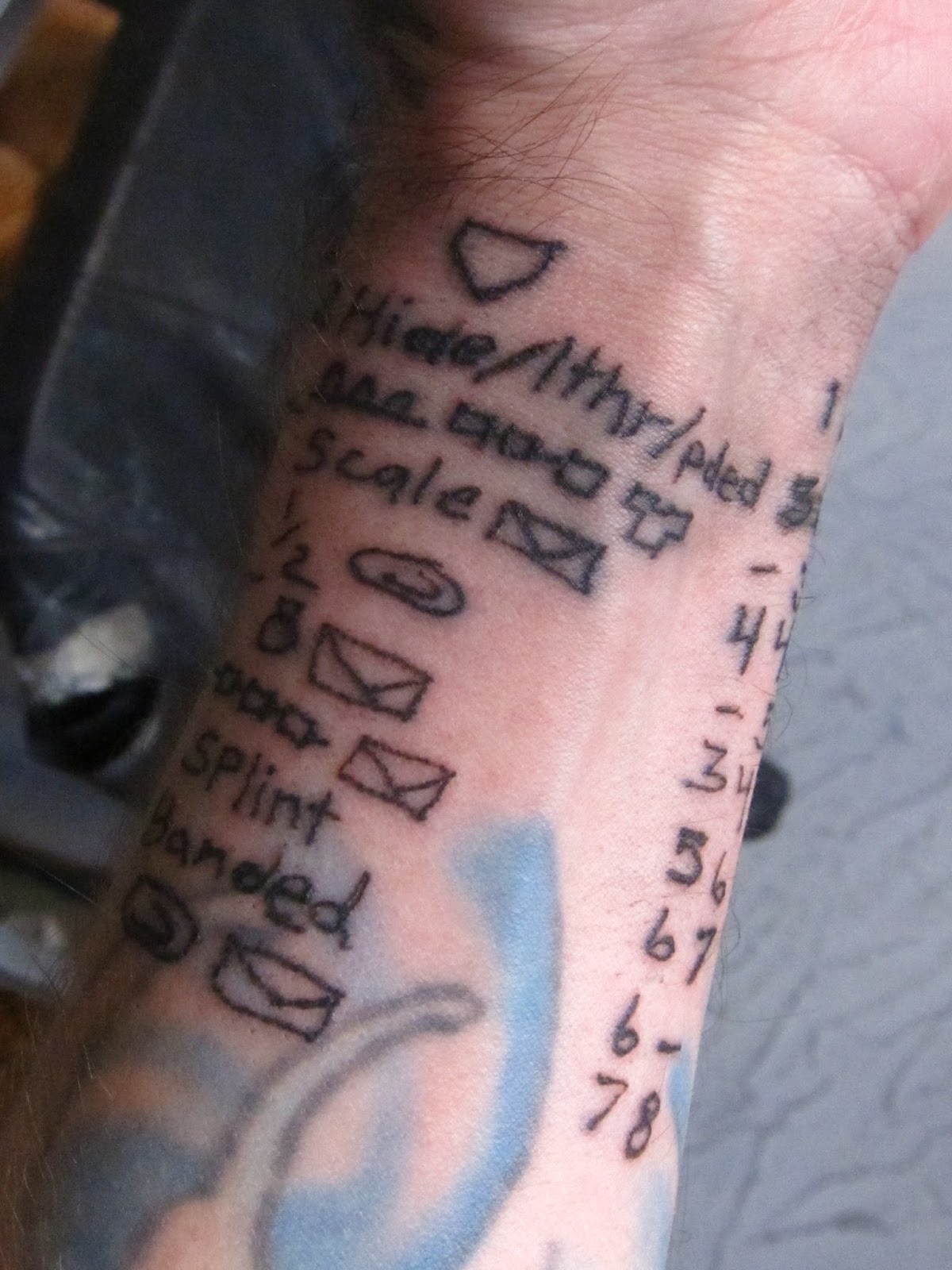 It's a good solution and I recommend it.

The same day, BoingBoing put out an article on the new edition of the game, the article got it mostly right.

There is little doubt* that the new edition of D&D was influenced by that loose group of stalwart players and creators that are part of a trend called The Old School Renaissance. While the OSR has no overarching mission statement, there does seem to be a common thread weaving through the many games, supplements, and home-brew adventures; an attempt to capture a flavor of gaming that emphasizes gonzo adventuring over stiff combat rules and an unabashed love for the literature and myths that inspired the earliest iteration of the game. Nevertheless, D&D 5th is much slicker than anything in the OSR, and the original DIY quality of D&D can probably never again be captured except by those producing third-party materials.

The comments, as usual, were weird... 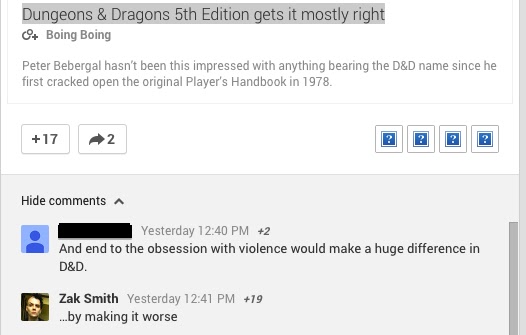 The actual BoingBoing comments sported a genuine StoryGames supremacist who took the release of the 5th edition of D&D as an excuse to talk about how much objectively better the _____ World games, then got mad when not everyone agreed with him… 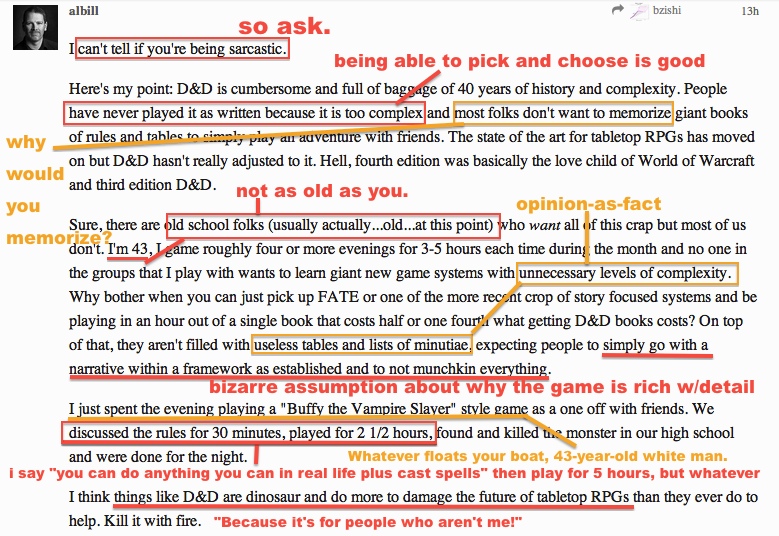 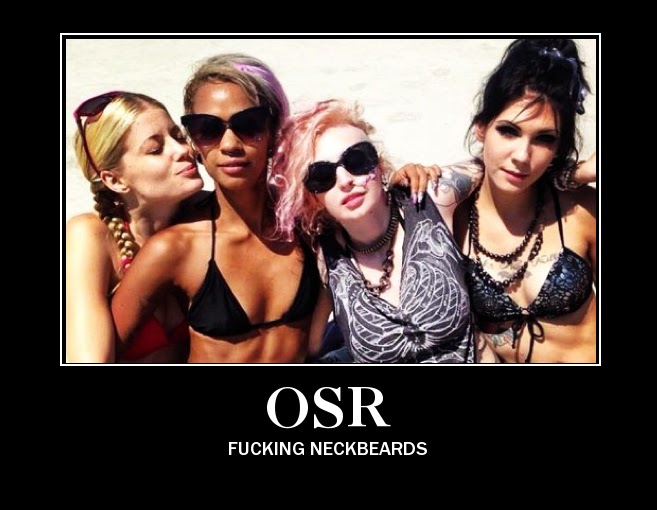 As it happens, I played Apoc World just a couple days ago because it was resident Cool Story Gamer Shoepixie's birthday and she wanted to. …if you live in Los Angeles in 2014, making up post-apocalyptic shit is pretty easy.

D&D, as usual, is far crueler--
Kirin--kowtowing to the profound social footprint demanded by this harshest of mistresses came up with these for our Rappan Athuk game: 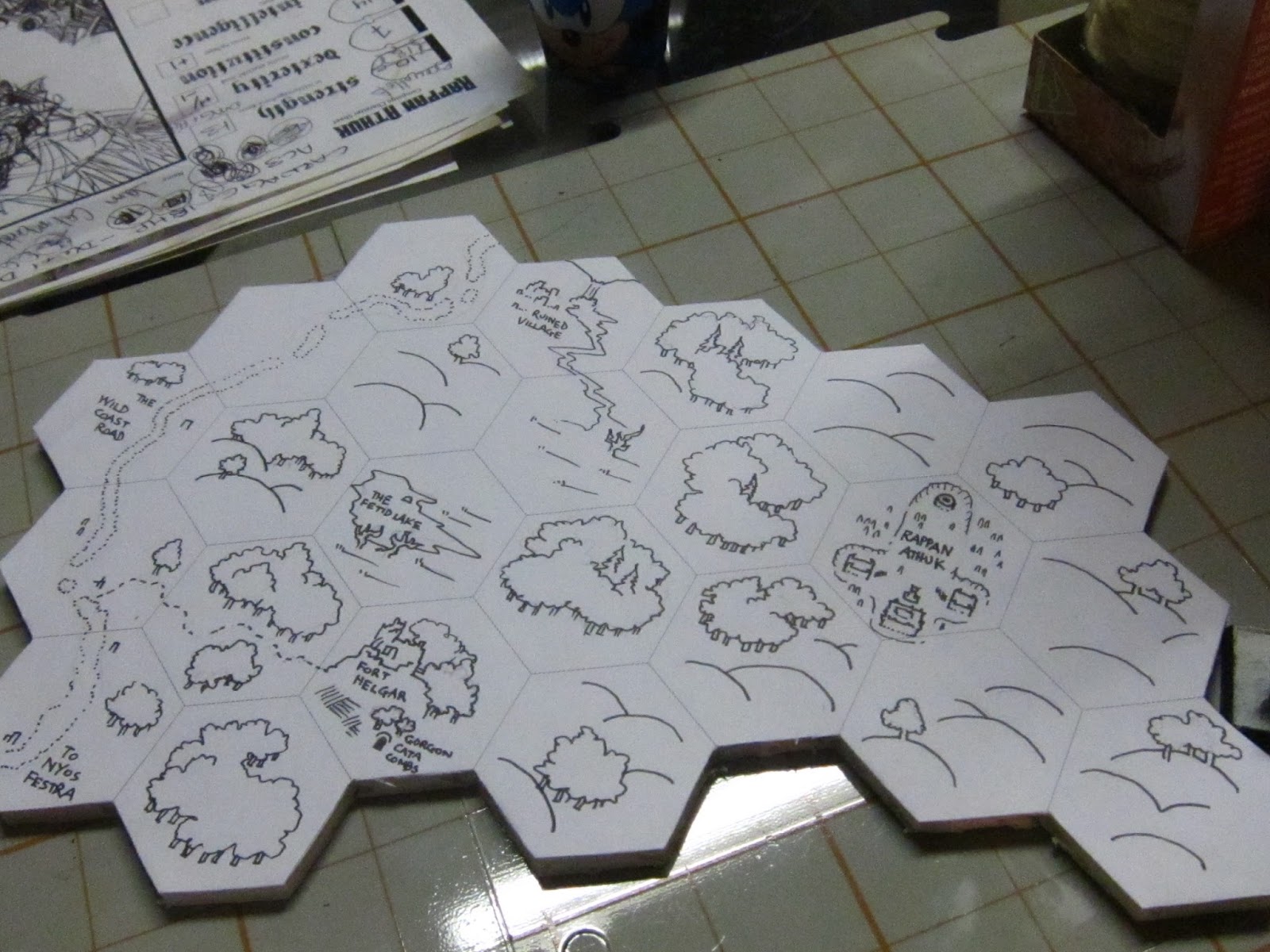 "Fort Helgar" is our HQ, named after our German wizard--deceased after a battle with a troll (because the dice thought that would be fun).

And I got out some wood glue and stuck some dungeon tiles on some leftover shelf bits because I was thinking it might be nice to have a sort of second smaller table to stick on top of our actual table so that there'd be more room for snacks. 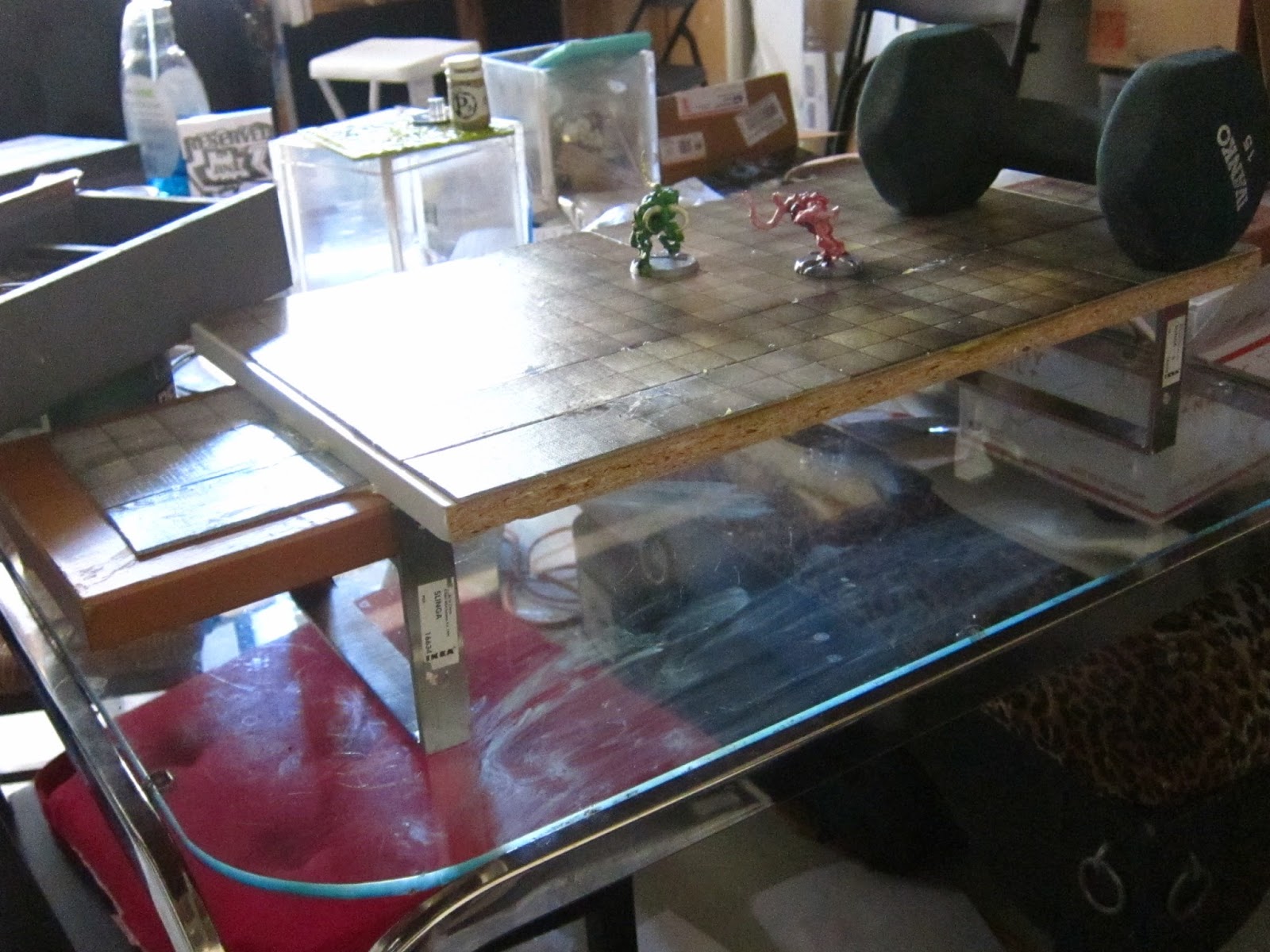 I am the oldest gamer in my club at 44 - ive been dubbed patron saint of oldschool in sydney - a flattering but meaningless accolade. I get the you are cockblocking new games talk lots. They refer to me as simulationst gamer. My young friends dont realize i grew up as youngest in a club of wargamer military vets 30 years older than me who would ply 8 hours of a 5 second sniper vs sniper game - loved chivalry vs sorcery and many other far more complex games. I like diversity in games and dont want people to play my way that would be boring if everyone was like me and would make my efforts seem pointless. Ive never cockblocked anyone from gaming the way they want. I personally find story telling games have no feeling of risk. Gumshoe games remove gm power and are more linear and pointless. Just what I think please go play them for yourself. I get young gamers trying to introduce me (proselytize me) to save me from DnD and CoC. They mostly miss the point of why i play them. I dont just play my homebrew of BX because i am trapped in amber like dinosaur spunk, it's actually because it is simpler than many modern games. OSR is as much about DIY and incredible imagination over commercial product. Cthulhu/BRP. I like because it is gritty and players feel like they could die at any moment. Everything player needs is on one sheet. How is that bad.

Im old, overweight (as i have chronic arthritis and still think every meal could be my last) and I sweat from fever induced by inflammatory illness and i could grow a neckbeard. The awful stereotypes about gamers, old gamers, dnd gamers, osr gamers is awful biggotry as bad as any other kind and is based on kneejerk judgements and unwillingness to bother to know what osr even is. (Does any one call george r martin a neckbeard?). Are all story gamers beautiful? Possibly if gamers were all born perfect muscle bound aryans many would be more interested in football and abusing weaker people i dont know. Nerd culture is still too small to turn on itself. Wasting pages ragging on other gamers taste while politicians who effect the world remain un trolled is sad.

Poor Albill indeed.
I am older than he is and I actually wrote parts of the honest-freaking-god Buffy RPG and D&D 5 is no more complex than D&D ever was. I get it. My kids stayed up the night after we got our books and they get it. My wife, who tolerates our hobby with a smile, gets it AND likes it and wants us to play in a family game night every other week.

I fail to understand where his problems are coming from. But hey. FATE is cool too.

I can't think of any RPG less cool than it, actually. FATAL, maybe.
Totally bland, made by a bigot. Fuck that game.

I concur. I hate Fate.

I don't understand the need to prattle on about a game you don't like, just move on to something you enjoy and leave those of us who are enjoying D&D5 the fuck alone.

If you don't like D&D then DON'T PLAY IT!

Not sure how this could be any easier to figure out.

P.S. I don think I will be tattooing Armor Classes on my arm any time soon, but it looks good on you!

I’ve had some fun with Fate. (I just like D&D much more.)
And I think Hicks genuinely does his best to be good, recognize his mistakes and improve.
You have also done things I disagree with.

When it comes to actual gaming material you guys are both geniuses. I get that you hate each other, and I don’t mean to get in the way of that.

If I have done things you disagree with, you should say what they are.

These numbers are usable as they are, ACKS/THAC10 style, or you can just pretend there’s 1 in front of them and use ascending AC as per 5e RAW.

The solution is good but some of the PCs in my game have like dex mods and shields and defense fighting style and stuff like that. So their AC is all over, I can’t just think “OK, she has chain so she has 16”. But the tattoo is awesome and knowing that chain is 16 does help. Maybe it’s more help for knowing the AC of monsters rather than the AC of players?

What I’ve done is that write a note in front of me that’s just like “Goblins: 8, 10, 13” and that’s what Goblins need to hit the magic-user, thief and noble respectively.
But I do use just the last digit, I add it to the tens-complement of the monster’s listed to-hit bonus and then I have the number they have to meet or beat on a d20.
Example: Goblins have +4 to hit. In my at-the-table stat blocks I have it listed as 6. The noble in our group has AC 17.
6 + 7 = 13, done. All d20 rolls 13 or higher will be hits, I can roll tons of attacks and read them quickly and I can note the 13 down on the goblin’s card if I want.

Three things:
• When you did the list of those who had +1:ed a post, some of those people got very harassed by anonymous fans of you. That harassment, by those anonymous fans, was contrary to your stated wishes and you spoke out against it. I wished you had spoken out even louder against such harassment. That’s all. Don’t take this as a bigger disagreement than it is, but there it is.

I wouldn’t have made that list in the first place but I don’t use or understand G+, Facebook or Twitter so that’s like me having an opinion on Martian politics — meaningless. I leave it to you guys to battle it out.

• You’ve seemingly allied yourself with the RPGsite folks. Now, a lot of people I have great respect for has posted there too. And I have myself posted at RPG.net which is also a problematic site. So this is an even smaller disagreement, and even more understandable. In the whole fight over the consultants credit, both groups have seen people I like and people I dislike join up with them. Which makes everyone look bad (“look bad”, not “be bad”), even those who try hard to be good.

• You use extremely harsh words about your enemies. So do I (about my own enemies), but seeing someone else do it makes me reconsider that behaviour.

So, those three things.

And I used to disagree with you a lot about the Cook thing — (I thought you were arguing about succubi and bat winged women in a thread that was about something else) but you set me straight a couple of weeks back. Thanks for that.

Also, thanks for the opportunity to clarify.
I realize, right now, that just saying “things that I disagree with” can sound like “oooh, Zak is bad and I won’t say why”. I didn’t understand that at the time I wrote my last post. I don’t mean to make it any worse than it is. I apologize.

I wrote earlier that I’m scared of Pundit (on the one side) and the SA goons on the other. Well, I guess I’m a little scared of everyone, now. Even you — this conversation goes a long way to help that. Thanks.

PS.
+ I didn’t want to turn a small pro-Hicks comment — on your blog, no less — into a whole “let’s state all the things I disagree with” thing. But here it is. :)

1. You should have notified me this was happening and said something, otherwise I have no way of knowing.

2. I have not "allied myself" with any folks. TheRPGsite is a public forum so it is a good place to put information that would be boring to put here on the blog.

3. The people who attacked me are bigots who falsely accused me of hate crimes on false pretences while my girlfriend was in the hospital getting a feeding tube put in and who wouldn't admit their mistake _even if it meant causes they allegedly believe in losing money_. If that act of pure evil does not deserve harsh words than nothing does.

There is no possible room for any reasonable person to disagree with harsh words being directed at scum like that.

3. I’ll have to consider this point further. As I said, I tend to do the same thing when people treat me and mine badly. So I see your point.