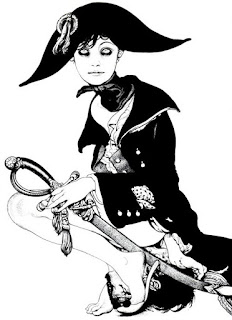 The Rogue Traitors (or Trader Marines) menace all waters from Nephilidia to the Exotic East and from the Nornrik Kraal to the Colossal Waste.

Some lack eyes, some lack hands, some lack legs below the knee. Some have birds trained to talk or brass telescopes manufactured with lenses from the Southern Bleak. Some are fearless, all are feared.

Their battles with the goblin freebooters of Gaxen Kane are legendary. 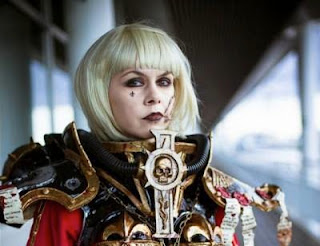 The Traitors are said to number 40,000, one for each island in the sea of Ignorance and Pain. Their home is the fortified city of Enraki--the Terrible Eye.

These pirate queens are largely autonomous, though they abide a common code of Piratical Law, enforced with oaths sworn on ginseng rum and dead men's teeth. The Code prohibits any member of any queen's fleet from revealing the location of any ship in the Traitor Navy.

The defense of their collective right to ubiquitous plunder is the domain of their nominal empress, red-haired Fifi Bendacier, the Strand of Steel, She of the Long Stockings. 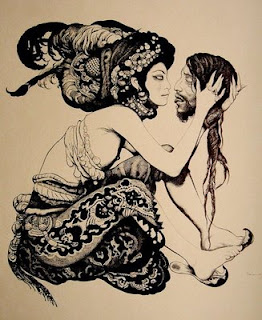 The 20 known flagship vessels and their associated sea queens are as follows:

2. The Grey Knight, a floating library, serves Jacquotte Delahaye, a priestess of Vorn who cannot die.

4. The crew of Bonny Crowley Ann's Perdurabo attempts to summon unholy things from the briny dark.

5. Ching Shih commands the White Scar, the fastest ship in the sea.

6. The Fenris is commanded by Aelfhild, who is cursed with lycanthropy.

7. The Phalanx is a fearsome dreadnought. Its captain, Terra Dorn, will duel anyone over anything.

8. Lady Curse captains the Dart of Harkness, and her methods, involving snails and straight razors, are unsound.

9. The Sleeping Captain Ba'Al'Sheeba is an exiled vampire of Gyorsla, her ship is the Blood Angel.

10. Princess Seela, one of the twelve medusa sisters, sails the sea in the Iron Hand. Her crippled crew is adorned with a wide variety threatening prosthetics.

11. The Dead Templar belongs to the Queen Sayyida, married to the warlord of Abu Zin Zeer.

12. Ann Geryon leads the bloodthirsty crew of the the World Eater.

14. The crew of the Dusk Raider carries 1000 diseases. It is said Queen Mortara prefers it that way.

15. Arielle, a sorceress, researches unspeakable magics aboard the the Thousandth Daughter.

16. Cthonia the Despoiler, Warmistress of the Rogue Traitors has three flagships: the Daughters of Nephthys, the Lunar Wolf and the Black Fifty.

17. The Word Bearer bears Sullen Culchis, Priestess of the Slime on her endless inquisition.

18. Queen Nocturr incinerates all that oppose her from the deck of the flame-resistant Salamander with oil bombs and flaming arrows. Her fleet is (predictably) small, and (predictably) much feared.

19. Queen Korax is captain of the Deliverer, and her crew are dead men walking.

20. The Conjoined Queen Alpha Lygeia rules the Hydra and the largest fleet in the Traitor navy. 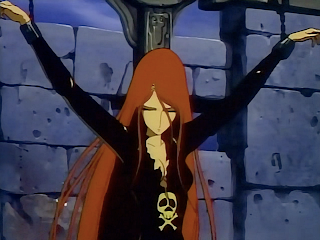 Man, I love watching the different parts of your cube world grow.

Ok, yeah, I see what you did there.

Running a pirates campaign. Can always use new Pirates, since the PCs seem eager to prey on predators. Thanks for the seeds!

Oh man that was entertaining to read. Checking each chapter off the list in my head as I read was awesome. Really cool how you took inspiration and names but totally made it your own.

They should be wary, for the Tyrant Dead rise, in swarm fleets from the frozen but rumored Ice Passage & the still & impassable Black Sargasso. The Tyrant Dead, liches & mummies made from the fossils of the dead Lizard King empire of dragons & dinosaurs, grown warped by Stygian Mutations, singing in a great sepulchral Hive Dirge.

Better than the source material.

Amazeballs! I love that you shoehorned Pippi Longstocking into a 40k themed pirate horde. Also, the bit about the Ultramarine was pretty priceless. :D