Christ, I just read this over and it's unbelievably dire. This module is slowly killing me. Here, have a picture of some hot chicks playing D&D...
Ok, now, on with the slow death of my sense of humor....


A spiffy James Zhang illustration of a woman with a very nice ass looking at a very nice Castle Greyhawk which some professional cyberhippie did their best to bury under under sepia and dropshadows and texture fills and various other visual gibberish announces Expedition to the Ruins of Greyhawk--Chapter 3: Castle and Dungeons.

We're 38 pages into the module and three entries into this Let's Mine! lunacy and finally we get to the dungeon.

Remember, any good ideas in the module will be in large print.

Padding consisting of information we've either already been given or won't need to know...

Explanation that there are lots of ways into Castle Greyhawk but only one available at the moment (walking up to the front door of one of the towers).

Explanation that the dungeon's made of 3 towers--Tower of War, Tower of Magic, Tower of Zagyg--with a rundown of what's on each level ("Ochre Crypts", "Zagig's Promenade" etc) of each tower which somehow manages to deliver absolutely nothing actionable or memorable and doesn't even tell us how the events of the module we're actually reading fit into them.

A charming if distinctly CGtastic vertical faraway map of how the levels and towers connect. 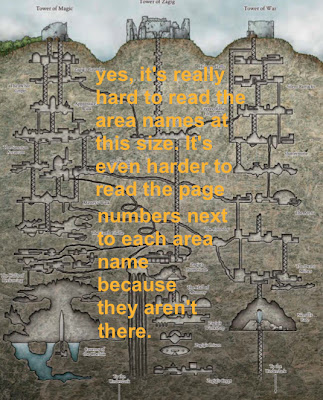 Now four blank sections of dungeon (dozen rooms each) you can use to fill in unprovided sections of the dungeon. Would be nice except they're all keyed like this:

5. A stagnant pool of water lies in the middle of the room. A thick layer of sludge has built up, obscuring the bottom, where the head from area 3 resides.
…that is: they have no monsters, traps, or  treasure, just dressing.  You have to do all the real work yourself. Even so, this might've been something approaching useful if they'd made the map sections bigger and just written the dressing notes onto the maps, but as is you now are looking in three places at once (map, map key, your own notes) to find out what's in a room in exchange for the convenience of knowing there's sludge in it.

A statue of Zagig stands in the center of this room. The statue holds one arm outstretched and can be turned. Whatever door it points at cannot be opened.
Then there's a gross little section explaining that the designers couldn't be fucked to just build the dungeon layout to showcase the plot beats the module is supposedly built around so instead here are a bunch of tools (angry clerics, scary monsters, annoying stairs) you can use to nullify players' wrong choices until they stumble into the parts of the dungeon where the story is.

The gears of a location-based adventure from the 2e-era being retrofit into an event-and-NPC based adventure never grind louder than they do here and it's depressing and I hope (a sixth of the way in to a 200-odd page module) that the fact that the designers didn't even do the negligible work it would've required to make the areas they actually wrote about accessible before the rest of the dungeon without railroading is not representative of the amount of thought they put into the thing as a whole.

In much the same vein, there's a section of random encounters for each level--the tables themselves are inoffensive enough but the advice on administering them is right out of Cinematic GMing central: roll one whenever you're bored, don't do it after a big fight, do not under any circumstances give the players the feeling their decisions matter or that there is any point to thinking about anything other than the GM's patience.

There are also three special encounters you can put wherever you want:

-The Rival Explorer. It's a wizard looking for valuable stuff in the dungeon along with a bunch of kobold helpers and an imp. The encounter takes place in a room full of cauldrons and potions and braziers. There is a bit of groaningly WOTCish thinking to the set-up:

"Any of these bottles can be thrown as a splash weapon and has a 50% chance of functioning like alchemist’s fire, except for the damage type (acid, cold, electricity, or fire, determined randomly)."

…but anyone worth their salt at running games should be able to come up with a list of 4-6 more interesting effects. (How about…..Sleep every other round, shrink, polymorph--toad, and shrieker noise.)

-There's also an evil version of the full torso library spectre from Ghostbusters (it's even shown going "Sssssh" in the illustration). It uses its poltergeistkinesis to hurl books at the PCs and knock shelves over on them. Finding some pieces of the book that destroyed him (scattered throughout the dungeon and in the city) puts him to rest.

-And last and least: some xorns. It's possible that with a copy of the SRD, a slide rule and more generosity and patience than the good lord granted your humble narrator someone could find a significant and interesting difference between this encounter and rolling "xorns (4)" on a random encounter. But he or she is not here.

Score for this section:

Next time: the Tower of War--and some actual labeled rooms in the actual dungeon.

Since this chapter was short, let's also go to the mailbag...


"
I got both this book and the original 2nd Edition Greyhawk Ruins supplement.

After you finish with the 3rd Edition version, you should compare it to the 2nd Edition version and see which you would find more useful. (I'm betting the maps alone make the former product an easy win.)
"

It is terrible.
If this is "short-and-to-the-point" by you, you're on a lot of drugs:

"
P225. Three pillars support this room next to a three tiered altar. Carved upon the grey altar is the golden image of a spindle with three strands of thread coming from it.

This is a simple altar and has no powers. However, it is watched over by Istus and thus any acts here will likely be known to her. Her avatar or servants may appear if she feels it necessary.

As Zagig became more concerned about his aging body, his own fate and destiny gripped his mind. Coupled with his over unquenchable thirst for power, he eventually turned to the goddess Istus for direction. He constructed this section of the dungeon in her honor, at the same time his “madness” emerged.
"

And that's one of the shorter rooms.

Email ThisBlogThis!Share to TwitterShare to FacebookShare to Pinterest
Labels: about books, adventures, books, design, DnD, I think Expedition to the Ruins of Greyhawk hates me, reviews

Ghostbusters, way more stuff should be stolen out of that movie.

"the tables themselves are inoffensive enough but the advice on administering them is right out of Cinematic GMing central: roll one whenever you're bored, don't do it after a big fight, do not under any circumstances give the players the feeling their decisions matter or that there is any point to thinking about anything other than the GM's patience."
Alas, that's a too apt description of some GMs I've met!

Coincidentally, I recently read through the 2E Greyhawk Ruins and noted down every idea I thought was worth stealing. The final count was 76, but to be fair at least half of those was a case of me reading the room description and immediately thinking of a better idea and writing that down instead.

Sorry about the double posts. And the general accuracy of them. (Namely, none.) I should have posted AFTER I re-reviewed the products. Or maybe not even then. Teaches me to post while at work.

Nothing to do with Yawnhawk, but you should submit your awesome gods to Gorgonmilk for Raise Petty Gods...

That's weirdly personalized spam you're dropping on my site.

not spam... I'm a little confused.

The good idea about the statue interacting with the doors is a rehash from the 1979 Holmes Basic D&D sample dungeon, area D. (Original points at the only openable door, starting where the PCs enter.)