I periodically stare at the pile of RPG books under the bed, rueful and puzzled that there seems to be absolutely not one single useful new idea in the whole stack.

Then I go "Oh that can't be true!" and I pick one up, and it tells me that Readyr'eat is the name of a month in Autumn and I shriek like Linda Blair and then I die.

But today I will be perverse and brave: I am going to actually try to read a published D&D product all the way through.

This will be no ordinary Let's Read snarkfest though. I am actually going to try to extract useful game stuff as I go. If I find a good idea, I'll make it big and you'll read about it here--I am reading this so you don't have to. We'll see how that goes.

And then, if you're very good and I've got nothing better to do--I'll rewrite the thing with only the good ideas.

For this exercise I've pulled this off the shelf: 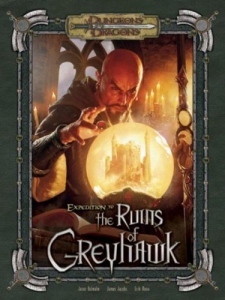 Expedition to the Ruins of Greyhawk is a 3rd edition expanded and WOTCfied version of the TSR dungeon Greyhawk Ruins which was, in its turn, a D&D 2nd edition attempt to describe what was under the original D&D dungeon, Gary Gygax's Castle Greyhawk.

Which is to say, it is a 3rd generation telephone game attempt to recreate the primal ur dungeon that never saw print, which is some kind of metaphor for something I guess. We'll either get three layers of ideas or three layers of things to make fun of.

Plus, grognards in the cheap seats, free to angrily chuck fish parts and Greyhawk lore at me from the balcony. There will be many opportunities for it.

On the cover: Michael Komarck goves us a strikingly photorealistic depiction of the model who posed for the photo reference for Michael Komarck's cover. His earrings are asymmetrical.

Introduction: In a place north of a place lies a dungeon wherewithin is stuff built by a guy. He isn't there any more.

Castle Greyhawk Birthplace of Adventure: Ok, so...(forgive me I'm only 4 paragraphs in and it's already like reading the plot of nine Marvel summer crossovers mashed together)...so there's all these guys whose names are D&D spells and also, coincidentally anagrams of Gary Gygax's original players  aaaaand...they're old now and there's a bad guy who wants to kill them. I think that's the size of it.

Then it tells us what's coming up...

I. The Free City of Greyhawk This is where there'll be an inn and thieves and all that.

II. The Castle And The Dungeons What it says on the tin. One hopes.

III. The Tower of War When the PCs finally arrive at the gates of Castle Greyhawk, they find that the only way inside is through the front gates of Zagig’s Tower of War... This used to be the crazy wizard's armory. If I remember correctly from Greyhawk Ruins it's a pointless funhouse of crazy wizard trouble with some kind of cheap humanoids occasionally realizing you're there. The description here seems to reinforce that it'll be that plus some bonus railroading.

IV. City of Hawks City of Thieves To get further in the dungeon, you go back to the City, ride a railroad to a bossfight and get a key.

V. Wrath of the Old One Return to dungeon, learn about plot, get attacked by demigod.

Then the major NPCs are introduced... 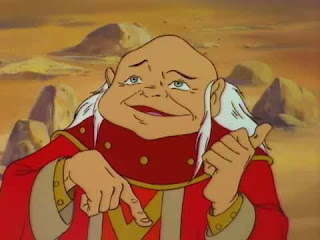 Zagig (aka Zagyg): Crazy wizard. Imprisoned 9 demigods in his dungeon. 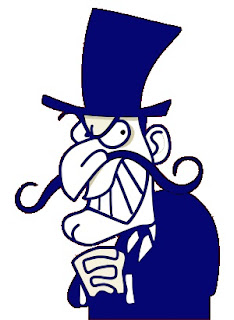 Iuz: Race: Part-demon. Class: Bastard. Level: Dark Lord. "Those who rebelled or refused to submit to his will were ruthlessly slain, their skulls placed along a bloody three-hundred-mile road..." (That's especially good if they're not on pikes or anything, just lined up next to each other like shoes at the swimming pool for miles and miles and miles. Think of all the adventure hooks in those skulls. Every single person who stood against the dark lord. Plus, like, they knew if they died their skulls would be placed on the road, so some of them probably, being self-sacrificing good-guy types, encoded weapons, schemes, codes and spells against evil in their skulls.) Caught. Placed in the castle/dungeon. Then released by an adventurer, then set up his evil kingdom again. Had a fight, treaty. Still plotting revenge. 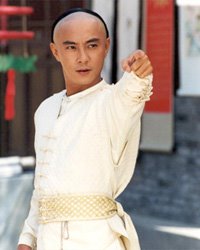 Zuoken: Legendary monk. Also captured by Zagig. A cult still seeks to free him. (If you're going to have 9 demigods trapped in your dungeon, having various interested parties trying to free each one for their own purposes is a good way to generate drama on the cheap.) 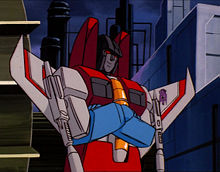 Vayne: Lieutenant of Iuz. Convinced Iuz to use an underground tunnel from their army's current location to the dungeon and then to the City of Greyhawk itself which apparently has some mcguffin Iuz wants. However, now that Vayne's actually in the dungeon and getting a look at all the magic stuffs in it, he's considering going all Starscream on his boss. He also keeps a fake version of his boss's mom around for reasons which I'm sure will become clear later. 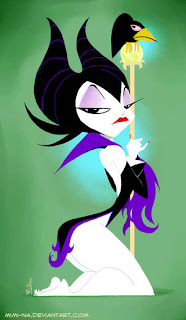 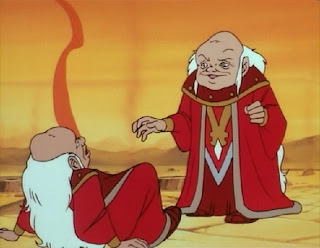 Mordenkainen: Ok, here's what I know about Mordenkainen--whereas "Zagyg" was the name of the wizard Gary Gygax invented to explain Castle Greyhawk, "Mordenkainen" was the name of Gary's actual main wizard PC he used to play games with. As for the official bio given here in the module: I just read a tax code worth of text and am no wiser. 1- He's a wizard and 2- he tricked his friend into freeing Iuz for some dumb reason. That's all I got. 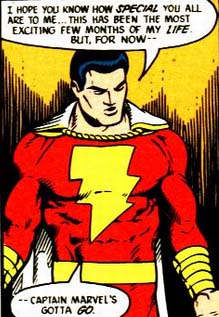 Robilar: This is the friend Mordenkainen tricked into freeing Iuz. He's some kind of badass apparently and has some dragons and owns a bar. They ran him out of town for letting the bad guy out. I'm pretty bored. ( The real story is more interesting. ) 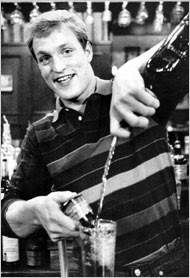 Ricard Damaris: He runs the bar.

For those keeping score at home....

Email ThisBlogThis!Share to TwitterShare to FacebookShare to Pinterest
Labels: adventures, DnD, I think Expedition to the Ruins of Greyhawk hates me

I'm praying hard to whatever god who is listening to you succeed in making this the first good version of the Greyhawk Ruins, at last.

The skulls along the road is a pretty great image.

I think Robilar was in the Rogues Gallery. I'm not sure if he was the guy blasting the kobolds or one of those that thought it was such fun sport to watch.

And sadly enough Robilar has his own wikipedia page.

So far it sounds like Return to the Parts of the Temple of Elemental Evil We Worked on Because We Thought It Would Be Awesome But Then We Got Bored, So Here's Part of an Iconic Dungeon Plus Some Re-purposed Free Web Content Stuff That We Threw In To Make You Feel Like You Didn't Just Buy One-Third of a Dungeon Because YOU DIDN'T! No Really, We Wouldn't Do That To You Our Beloved Fans.

enjoying your commentary and summaries. Eager for more!

To those interested, the PDF of this was just rereleased today on dndclassics:

For me, the key idea to this Castle Greyhawk is this: you know those big stupid NPCs that are like 30th level & you'll never use because how many campaigns take that long? Well, if you make a clone of one of them & say it is 15th level because it is a clone, that gives you a chance to bring them into a more reasonable range, PLUS then their agenda can be to do the Evil MacGuffin Ritual to reclaim their full power & become unstoppable.

That ain't a bad little villain pitch right there.

It seems like a bad idea to me, since it spoils the effect of the actual 30th level villain when s/he shows up.

Figure out how long the campaign will last and then make the most badass villains show up at the end _then_ . There are better ways to foreshadow than de-exoticising your big guns.

I know it's blasphemy to the grognards, but I've always hated Greyhawk for the names. Names are important to me. Deciding that everyone is named a reverse spelling of a particular player, or an unpronounceable collection of consonants, is lame.

Other than that, there were a few cool ideas. I could never get over the names though ...

I got both this book and the original 2nd Edition Greyhawk Ruins supplement.

After you finish with the 3rd Edition version, you should compare it to the 2nd Edition version and see which you would find more useful. (I'm betting the maps alone make the former product an easy win.)

If this is "short-and-to-the-point" by you, you're on a lot of drugs:

"
P225. Three pillars support this room next to a three tiered altar. Carved upon the grey altar is the golden image of a spindle with three strands of thread coming from it.
This is a simple altar and has no powers. How- ever, it is watched over by Istus and thus any acts here will likely be known to her. Her avatar or servants may appear if she feels it necessary.
As Zagig became more concerned about his aging body, his own fate and destiny gripped his mind. Coupled with his over unquenchable thirst for power, he eventually turned to the goddess Istus for direction. He constructed this section of the dungeon in her honor, at the same time his “madness” emerged.
"

And that's a short one.

What would be short version? Would prefer to adlib all fluff? I like less words, bullet points is best for me. I think part of the problem with "setting" modules is they mix up too much of the setting/history/etc into the descriptions. When you create your own you really just need something to jar your memory/imagination (also why I suck at sharing "modules". They're mostly just collection of phrases, words that make little sense without the rest, which is in my brain.

Was Damaris ever statted up? Because his loss to the Wyvern-mounted Half-orc is some serious bullshit. I mean, never mind the fact that he apparently wound up under the flipped cart after fighting Atolymar, but the cart would have flipped before the fight...

A ninth level human fighter would have a fort save of around +8. Assuming a 14 con and no con or save boosting items. This means that he saves against the Wyvern poison better than half the time. Then there's the fact that average damage on two failed saves does 14 con damage, ie, kills him. A wyvern is CR 4. Damaris is level 9. Basically the battle requires Damaris to be an idiot (no Amulet of health, no helpful potions) and have suck-luck, but also the wyvern to have sucky luck, because apparently it's poison did just enough to drop Damaris to 5hp, but not kill him.

and then you have to wonder why the hell Atolymar didn't kill him immediately. This isn't just rail roady (as I understand it, all published modules are at least a little rail roady), it's a poorly constructed rail road. Hell, it might as well be the "Do not look at the man behind the curtain" Express.

Not all published modules are railroady at all. Many location-based modules being the most obvious example.

Either way, i find the assumption that Damaris was an idiot and both he and the wyvern had bad luck one of the less difficult things in the module.