More Hexenbracken + How The Hell Do You Run A Hexcrawl Anyway

Ramanan took the collaborative hexmap from yesterday and totally pimped it out.

That link should take you to a clickable map of the whole area, it has a few less locations marked than the map I posted yesterday but makes up for it by being super-useful. Click a hex, it takes you to the description. Click a reference to a hex in another hex and it takes you straight there.

It's also a lot easier to cut and paste the text to make your own notes than the original spreadsheet.

Also, here's some more detail on one of those hexes.

Now that that's out of the way...somebody asked me a pretty reasonable question this morning...

"Assuming I never played a hexcrawl before, where can I find advice on how to run such a thing?﻿"

Let me see if I can get the basics down, then tell you where to look... 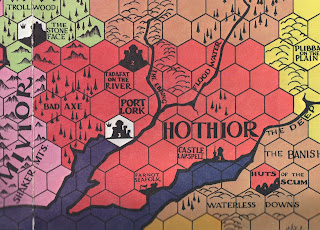 -The players will be either traveling overland from point to point (moving at traveling speed) and just running into stuff incidentally or carefully searching through each hex individually (moving at "mapping" or "searching" speed--which is slower). Which depends on the kind of campaign goals they have (like this one is all about mapping, while these involve both traveling and searching). Frodo and company were traveling, Lewis and Clark were searching.

-Searching characters are trying to find all the interesting stuff in an area. Traveling characters will only note the obvious stuff (mountains, huge rivers) or things that find them (angry cultists, stirges, etc)

-The key to this kind of thing is meaningful choices and choices require information. There are two traditional ways hexcrawling players can get information: A. They start with a partial map B. They look around.

-In either case, these two options should be jiggered as much as possible to present players with at least two options for how to go at all times. For traveling, the simplest choice is: Fast, dangerous route or slow, easier route. Of course the slow route is also dangerous because it gives more time to run into random encounters.

-If the players just look around (no map), they will see landmarks. Landmarks are super important. These are things PCs can see in different directions that indicate what kinda thing to expect in that direction--mountain? City? Monument? River? Without landmarks the players are just going "Hmm, east or west?" and that's totally arbitrary and boring because there's no information behind it.

-You can see 3 miles to the horizon over flat ground. If you or the landmark are higher up than flat ground and your view is unobstructed you'll see things that are farther away.

-Players walk (or ride) and you keep track of time (figure out movement speeds per hour and per day for whatever method the PCs are using). When you get to a new area figure out what's obvious and (if your players are searching) what's hidden. Tell them about the obvious thing right off "So you ride for an hour and then you see a huge rock shaped like a weasel".

-If there's an encounter, figure out whether the thing sees them or they see it first or whether they see each other simultaneously (just like a dungeon). Remember that since most hex products or maps you make are, of necessity, sketchy, you can and should embroider the hell out of what the PCs see. You do not have to stick to the description. "1047 River, Demon" can be turned into..."You see a bridge with an insect demon eating a giant pink ooze on it, there appears to be no other crossing here".

-Build up the setting around the players as they move. They meet a random cleric? If you can figure out who this is a cleric of and where the cleric's going and what temple the cleric is from you've just added lots of obstacles and resources for the players and added a layer to what's going on.

-At the end of a session, ask the players what they intend to do next session. You can prep more detail around their likely routes. The key to making a hexcrawl more than a bunch of random encounters is building relationships between locations on the map--a good hex map will have these seeded in to begin with, but there's always room for more.

-If your players are searching, remember there's lots of room in a hex for stuff no matter how small. Don't have any ideas? That's what all these goddamn random tables are for.

-A lotta times, if they're just traveling, the PCs will come upon nothing special in a given hex, that's ok.

Other stuff I wrote:

An example,  motivations for PCs in a sandbox, making your own sandbox (the bottom-up method)

Other useful resources for this kinda campaign:

-Making your own sandbox (by bat--from the top down method)

-The OSR Wisdom Wiki (particularly scroll down to "Wilderness Adventures")
-
-

How could you miss on the best day of the year to post the girls in bunny outfits?!

I'd explain but you never write back, so fuck it.

Thank you very much for explaining the use of Hex maps... It was one of those things that I always wondered about but never remembered to check! xD

Thank you for writing this post. I am new to being a GM and new to roleplaying in general and this is EXACTLY the kind of campaign I want to run with my group. After picking up the B/X d&d rules on rpgnow (and falling in love), I wanted to give my players a world to explore but had no idea how to implement it. This is the single most helpful thing I have found in the past week of searching for info on running hexcrawls. Thanks again.

Also the rest of the site is pretty rad.

Crazy thing to consider: assuming the overworld in it is to scale, every single place that can be explored in Skyrim fits into one hex.

Another thank you. I'm currently running a short module that doesn't require serious hexing, but one day I'll go the whole hog and I was wondering whether or not you'd be prepared to explain something so basic.

Thank you! I actually Googled "how to run a hexcrawl" yesterday. This is super useful!

It's nice to hear you actually helped somebody out