So back in the day, there were some cool Dragon Magazine articles about how to use the four-dimensional geometric concept of the tesseract, or hypercube in a dungeon. The first one laid out the basic idea, the second one showed how you could use it to create Escherian gravity effects. There was also a neat Baba Yaga adventure featuring the same idea.

Problem is: it's really hard to explain just the geometry of it, much less the cool things you can do with it in a dungeon. For example, here's someone trying pretty hard:

All that and they don't even get the gravity distortion in there.
Anyway, since I am working on this Alice In Wonderland thing I figure, hey, as long as I'm down here trying to figure out the Doormouse's armor class, might as well figure out how to build four-dimensional dungeons, right? 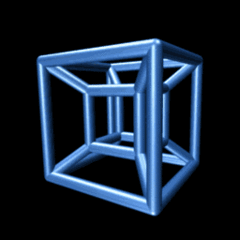 Here's an animated GIF of how one surface moves into the next. Don't worry if you don't understand yet.

So, in order to explain to myself and you how this works a little easier, I've just taken half of the thing and made a minidungeon out of it. You enter from normal space through the door where I've written a totally crunk "1": (side cutaway view) 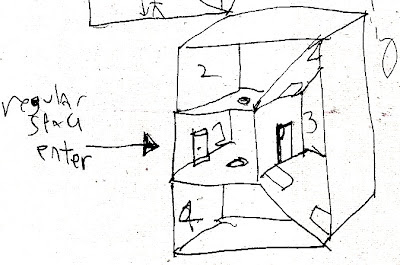 Don't worry, better picture in a second...
What makes this a half-tesseract is I'm missing the cells in the front, back and on the left and one cell formed, I believe, by the faces of all the outer cells functioning as the inner walls of the last cell. Yes, this makes my brain hurt and forgive me if I've got some of the math or terminology details wrong.

But the good news is that using only this chunk of a tesseract we can not only kinda explain how it works but, much more importantly, get all the basic weird dungeon effects you'd possibly want out of this particular piece of math...

So, dungeon, side view, here we go...(click to enlarge and see how filthy my scanner is) 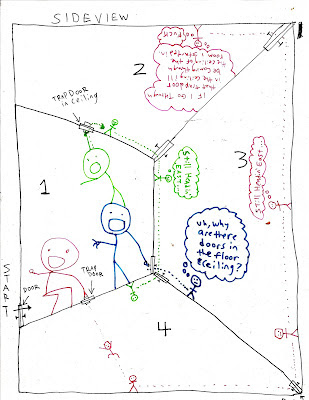 The only important thing not in the picture is: from the point of view of the peeps in any given room, the room looks like a regular cube, not a wonky wannabe trapezoid like it looks in the picture.
As far as Mr Pink, Ms Blue and Dr Green are concerned, the floor in room 1 meets the walls with the doors in them at right angles--and it's the same in every other room. Basically, each time they go through a door, they're unknowingly shifting through nonEuclidean space. Or something like that.
Also helpful to remember: people fall in the direction of their feet. So for example if Blue opened one of those doors on the floor in room 3 and went through, Blue would wall toward that vertical wall on the bottom left (the surface parallel to and opposite the door he just opened, since the room is "straightened out" from his point of view).
Now, chances are your players won't map this all out or need to (or will kill you if you make them) but having this little picture does make it easier for the GM running an adventure to track who should be sticking to which wall in which room. Just go: "Ok, did this gnoll follow Mr Pink's path or Dr Green's path?"
Anyway, point is you can kill your players on the ceiling this way, so that's cool.
In case you can't tell, I'm pretty excited about this Alice thing.

Email ThisBlogThis!Share to TwitterShare to FacebookShare to Pinterest
Labels: design, DnD, Eat Me

Why have I never thought of using a tesseract in DnD. That first diagram was a valiant attempt, but I only understand it because I've bashed my head against four-dimensional geometry a LOT. Now I wonder what can be accomplished with non-cubic fourth-dimensional objects... Hyperspheres, anyone?

Do you thing you will be able to maintain fluidity of action if you have players with two or three different frames of referance?

I must confess I would find it very difficult to do verbaly round the table. I have trouble describing irregular normal rooms without just leaning over and drawing it on the map.

Oh wow. Have you been talking to Alan Moore? If not perhaps you should.

2. Why not just draw it? "You're here, you;re here" John Madden does it all the time.

I always looked at a hypercube complex as a M.C. Escher-styled, 3D version of the Lost Woods from The Legend of Zelda game, but without the exits. That is, you have 8 cubed rooms (there would be no real distortion to the any of the room's dimensions) with gravity along the walls of each room (no real "up"). If you mark one room as the "center," (there are no true "center" in this complex) you would place the six adjacent rooms around the center room (north, south, east, west, above and below). Their are no rooms diagonal to the center room--adjacent rooms connect at the sides. Going outwards from any of the adjacent rooms would take you to the "outer" room. You do not see it on the animated model, because its literally all around the cube.

If you can grasp the layout, its not to hard to create a basic layout. On the other hand, it could confuse many players who are accustomed to a 2D dungeon layout, and punching-out holes in the walls would make thing a lot more weird and complicated. You can even add doors and windows to other places--which would be the best way to enter or escape the hypercube.

Yeah, a while back, it took me a bit to figure out what a tesseract/hypercube dungeon was, until I saw M.C. Escher's Relativity pic.

"Going outwards from any of the adjacent rooms would take you to the "outer" room. You do not see it on the animated model, because its literally all around the cube."

This threw me off for a while. I just didn't understand where the 8th cube was. :) This helped: http://en.wikipedia.org/wiki/File:Hcube_fold.gif

To be honest we don't actually know what a "hyper-cubed" or any 4D object looks like. technically that is just the 3D "shadow" of a 4D object. Our minds couldn't comprehend 4D.

Pretty excited by your Alice thing too.