So You Saw The Movie And Now You Want To Read Avengers Comics...

There is, unfortunately for you, no good comic* that has exactly the same Avengers line-up as the movie (Black Widow and Hulk fans will be particularly disappointed by their overall not-showing-upness). But I can definitely recommend some comics you'll like if you tell me what you liked about the movie...

Ok, I Just Want To Read One Issue of One Avengers Comic Before I Blow All My Money Because Some Guy Told Me To And I Want It To Have Thor And Captain America And Iron Man In It And I Want It To Look Good:

Get yourself a copy of Avengers/Squadron Supreme 1998 Annual by Kurt Busiek and Carlos Pacheco. The inside looks better than this crappy cover, I promise. anyway: this is basically what Avengers comics are like. Now you may read it and wonder: How did Firebird manage to talk to the ants? Don't ask me. Just relax, the plot holes only get bigger, ok? This is comic books.

Wait But I Want A Comic That Has Dialogue More Like The Movie, But Maybe Also With More Chicks In It And Also Maybe With Spider-Man and Wolverine From The X-Men In It:

So there's a long story arc where the original Avengers break up (don't worry, this kind of thing happens all the time) and then reform with new members and then fight among themselves. Funny words by Brian Michael Bendis, utterly respectable and then, later, completely stunning art by David Finch and Leinil Frances Yu respectively.

Go to your comic book store or online robo-outlet and get the following comics--Avengers Disassembled and New Avengers Volumes 1 (Breakout), 3 (Secrets and Lies) , 5 (Civil War), 6 (Revolution) and 7 (The Trust)


I Liked Captain America And I Like When They Fought Aliens, I Wish There Was More Of That And/Or I Really Like The Avengers And Kinda Want To Get Whole Hog Into The Whole Avengers Mythology Thing:

Avengers Forever. Like a rich and succulent nectar directly from the comic books of Zeus.

The Main Thing Was I Liked The Movie Costumes And That Nick Fury Was Samuel L Jackson: 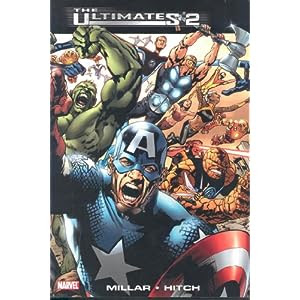 In that case you want an Avengers comic rather confusingly called The Ultimates. Start with volume one and go until you get bored. Warning: The giant Giant Man and the teeny tiny Wasp are, in this comic, even more The Avengers' Most Disturbing Couple than usual and in kind of exactly the way you think they would be. 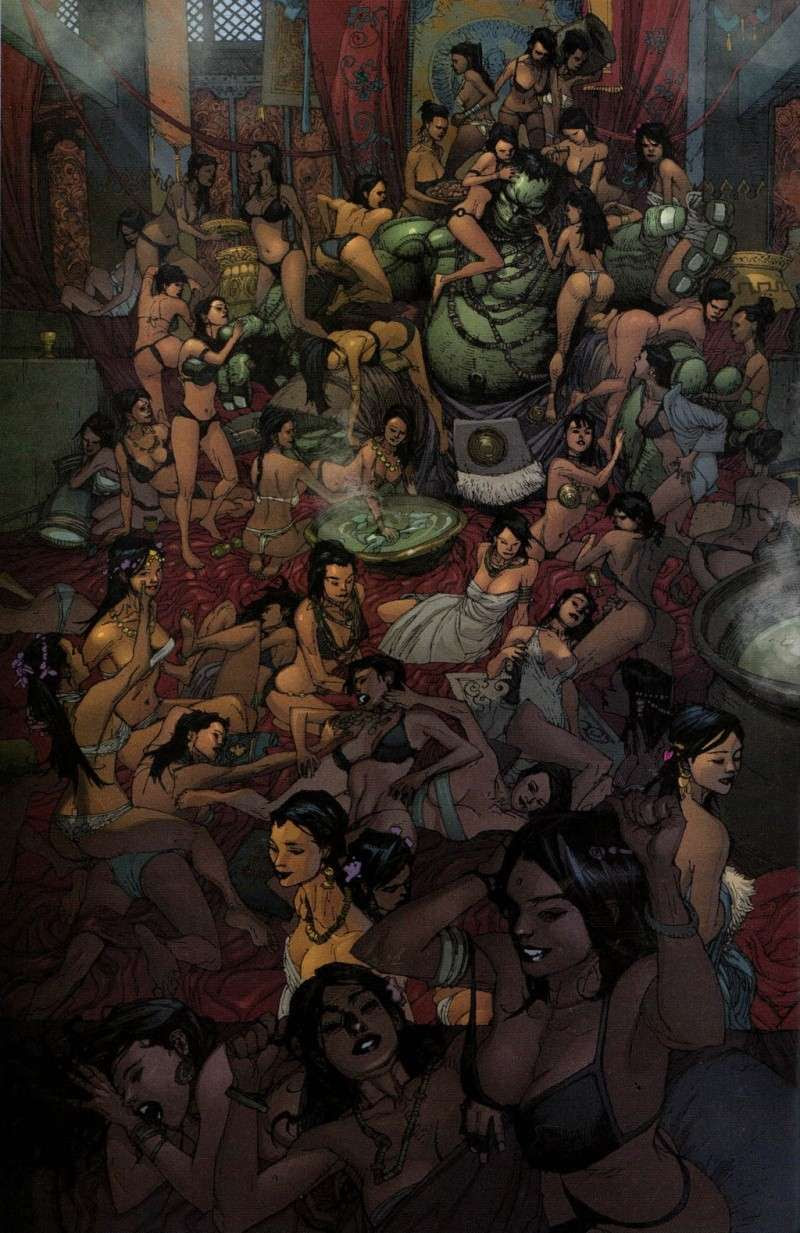 Ultimate Wolverine Vs. Hulk by Leinil Frances Yu and some writer who wrote for Lost or something. It has a panda in it.

Ok, Fine But I Hate New Comics, I Liked Comics Back When You Could See The Ben Day Dots As Big As A Golfball: 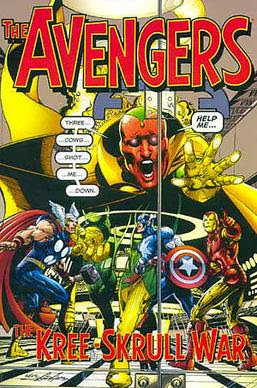 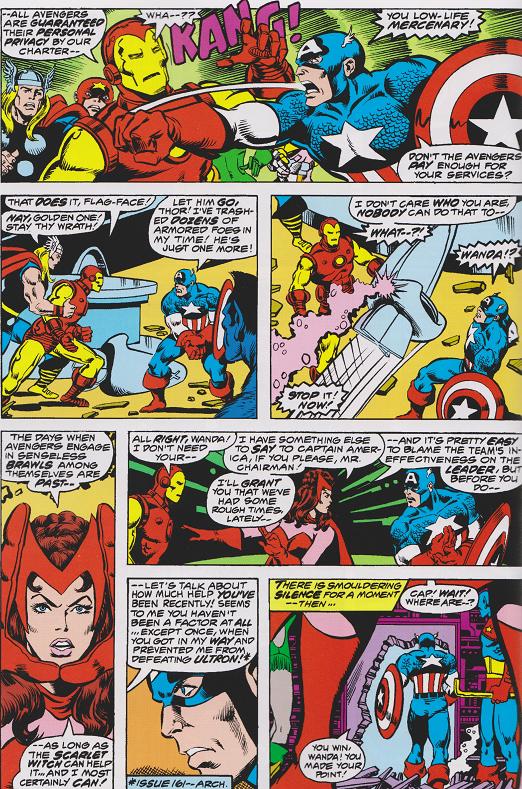 You want the Kree-Skrull War and then maybe the Korvac Saga my friend, knock yourself out.

Actually I Don't Really Care If It's The Avengers Or Not A Just Like Superheroes Bickering All Sitcomlike And Then Teaming Up To Hit Things After A While:

Oh you are in luck, Keith Giffen and JM DeMatteis wrote Justice League like this for years. So if you ever wanted to see Batman punch a Green Lantern in the face, there's a comic for you...
_______
Bonus comics:
Ok, but I'm a grown up and I want to see Tony Stark and Captain America all grown up...
Earth X.
Ok, I just love Thor is all...
Get the Walt Simonson run
Um...Black Widow...?
Frankly, her comics have never been that good, probably her best treatment was in Frank Miller's Daredevil stuff.
I want more Hawkeye!
No you don't.
___________
*There is a bad one, created especially for the movie. It is terrible.

The new 'Avengers Assemble' comic has the movie line-up in it. It's only been out for a few issues, so there aren't any convenient trade paperback collections for it yet. Also, it's written by Bendis, so take that for what it's worth.

All of the Marvel Essentials editions of the Avengers has a ton of good stuff cheap.

Hey, I *did* qualify that Bendis was writing it.

Are there any Avengers comics where the one female member is more impressive than a non-powered spy in a catsuit or a tiny wasp girl? Or there's actually *gasp* TWO females on the team at the same time? (She-Hulk? Ms. Marvel? Scarlet Witch? Bueller? Bueller?)

I'm not actually expecting a reply ... just making a point.


P.S. How about one where a woman leads the team? No, never mind, that's crazy talk.

Your point is not made at all.

The answers to your questions are all "yes".

"Are there any Avengers comics where the one female member is more impressive than a non-powered spy in a catsuit or a tiny wasp girl?"

"Or there's actually *gasp* TWO females on the team at the same time?"

"How about one where a woman leads the team? "

Including some of the comics listed here.

I'm not sure where you got your ideas from here...

I guess I'm complaining about the movie lineup: four iconic characters (Iron Man, Thor, Hulk, Captain America) plus ... Black Widow and Hawkeye? Granted, it's canon from (one of) the original runs, but since movies muck everything around on a whim anyway slotting in another female character wouldn't have been hard.

Granted, I haven't seen the movie yet, and I'm sure it's brilliant and Joss Whedon has a very soulful story arc for Black Widow and Hawkeye as the Dawn* and Xander of the team ... but on a movie poster it's a sausage fest plus a token chick, common enough in the '60s and '70s but a little weird today.

I see, well, while I too have many complaints about the movie (including the Avengers roster chosen) none of them have very much to do with the content of this post, so it was kind of confusing.

The first story arc of the 2010 Black Widow series was pretty good. I stopped reading after issue 5 because I didn't care for the new creative team, but the first part is collected as Black Widow: The Name of the Rose by Marjorie Liu and Daniel Acuna. The art looks like it was done in Photoshop but it's more painterly as opposed to "realistic" so I enjoyed it.

The Korvac saga is pretty awesome. One of the story lines I grew up with. Everyone is packed in those issues an d Ultron too!

For your Marvel comics, you might do worse than getting a subscription for their digital archive at Marvel.com. It's pretty cheap and gets you access to something like 10,000 comics, and more added every day. Just... don't do it if you have important deadlines coming up. This stuff can be worse than WoW.

What would have been your dream roster?

-sigh-
It's hard because it gets into all kinds of practical considerations about filmmaking and marketing and script time, but I think definitely no Hawkeye because the costume's even harder to get right than Thor and Cap and he doesn't really add that much per se (though he, like everyone, came off as an interesting character in the movie)
I think Wasp and Goliath and The Vision
would've been more fun to see, visually, than him though.

Panther could be great (played by Michael K Williams?), but I think overall he's so much like Batman in terms of his basic schtick (maybe why he never really took) that I would want him re-imagined in a new way and that would be very hard.

He doesn't feel like "The only guy like that" the way some other Avengers do--even though, say, The Vision was actually a remake character.

I'd have said Idris Elba if he weren't already Heimdall.

Everybody is "like" other characters. But as an image--which is what a comic book character is--he is mostly doing Batman's schtick.

Right, but also he doesn't really counterpoint the other characters so much as sort of form the in between point of them (because like batman he's an omnicompetent generalist)

Had no idea you were a big Avengers fan! Awesome! I suppose Justice and Firestar aren't a part of your iconic Avengers line up then.. ;p

i wouldn't say i'm that big of an avengers fan compared to any other comics. I like anything good, really,

Heck, I didn't know you were that much of a comics fan to know each of these storylines, even casually.

this post is the ideal answer to the question i was going to ask you in comments after seeing and quite enjoying the movie.

I rather enjoyed the Richard K Morgan (of the Takeshi Kovacs series) run of Black Widow.

I bought it just because he was writing it and I was pretty happy with it.