Found this at a yard sale... 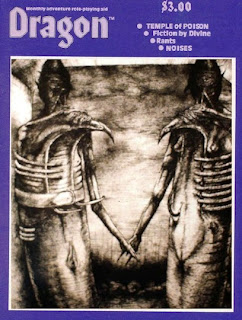 ...an issue of Dragon I've never seen before--so I snatched it up. The guy whose yard it was had one of those rubber veteran's hospital legs and was reading a Daphne DuMaurier paperback. He told me he used to collect them. Dragons I mean.

He gave me a discount because this one was largely illegible due to various pretty much indescribable printing errors... 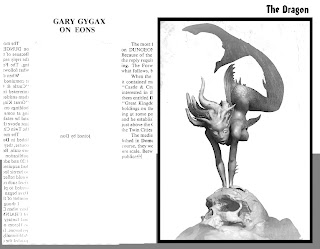 "It's all fucked" he said "take it for a nickel."
The only part I could make out was...
The rulers of Byzantium were accustomed to blinding their rivals. With ornamental eye scoops, with daggers, with candelabras, kitchen knives, and tent pegs, with burning coals and boiling vinegar, with red-hot bowls held near the face and with bandages that left the eyes unharmed but were forbidden to be removed; sometimes it was sufficient merely to singe the eyelashes, for the victim to bellow and sigh like a lion as a trained executioner pantomimed the act. Sometimes cruelty was intended beyond the enucleation itself, as when the emperor Diogenes Romanus was deposed and “they permitted some unpracticed Jew to proceed in blinding the eyes” and “he lived several days in pain and exuding a bad odor.”
...which--while a pretty good template for how to write up a setting for print--somewhat dischronistically seems to come from this.

Anyway, does anybody have an undamaged copy of this issue? I kinda want to know whether the "Divine" who wrote this issue's fiction is the John Waters one. And both "On Eons" and "Temple of Poison" look interesting.
Oh, and what I can make out of the "Optional Critical Magic-Damage Rules" looks mind-blowing.

Also, the ad on the back cover was nuts... 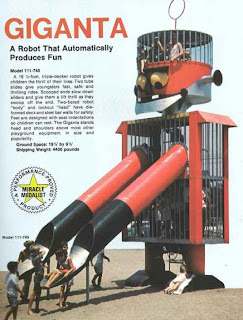 I look at the robot and I think wickerman. The chutes are to collect the fat running off I presume. Flying potions and whatnot.

Got an issue number? I might be able to dig something up for you.

I think I once read some things on a forum about those "Optional Critical Magic-Damage Rules", I tried to look it up but I couldn't find it again . What I remember though, were some of the options:
-target cries tears of element involved in spell, these tears deal 1d4 damage each round and target won't stop crying untill cheered up.
-target ear falls off and changes into cloth. If this cloth is sewn into a piece of clothing it will allow the wearer to hear anything the target hears.
-if the target doesn't survive the damage, it rises as an elemental (same type of element used in the spell) and goes berserk
-target will suffer through these effects:
1st round: target sees through clothing
2nd round: target sees through skin (save vs fear to stay calm)
3rd round: target sees exposed organs and bones(crit chance doubles)
4th round and up: every creature is invisible to target

That robot play-set looks awesome! I remember elaborate multi-floor sets like that as a kid, but the ones today are too simple and really boring! I do not envy the kids today. =\

Agreed. Back in the day we'd hassle mom into driving us two towns over to play at the playground with a three story rocket ship that looked a lot like that. I do remember that in direct sunlight that metal would get to be pretty dang hot, though. They stopped making them because kids got hurt that way. Of course, we were dumb enough to deal with that by not touching the hot metal. Good thing my kids never have to learn lessons like that, right? ...not that I'm bitter.

I find Giganta disturbing. It was Michael Bay's attempt to do a remake of Wicker Man right after he made Transformers. It is an evil robot of prurient sexual intent. And children are crawling around inside of it.

Other than that, it is a good issue and one I wish I had in my collection. Except for the blinding article, which got many historical facts wrong.

Back in the day, one of our DnD playing neighbours bought this. They had one of those downward sloping back yards. The robot was mistakenly shipped with only one chute, but the neighbours erected it anyway, installing the chute a little lower on the robot body.

When I graduated elementary school and got to go to middle school for goddamn finally, the kid from the next cul-de-sac over whose family had a big big Winnebago ('Larry Loser') (was the kid's name not the Winnebago's) invited all the kids from the class over to play Laser Tag. We were playing in the Winnebago and he locked me in it. I finally got out by climbing out one of the windows and tore my pants. I went back behind the house and saw that his parents had bought him and his sisters a Giganta. I wanted it super badly but we moved to Chicago. I got really violent because of the neighborhood but a professor friend of my mom's got me into literature instead and I became very much a champion with literature. Later I found out Larry had all kinds of diseases is what we were making fun of him for, but because of the neighborhood I kind of felt like I didn't really give much of a fuck.

Relatedly: the single hottest conversation I ever had with another person was at University of College with Meredith. We came back from Walden Pond and everyone was feeling really close to each other but I hadn't figured out to be OK with not having sex with her so I was pushy in what I thought was a 'cool' way. She was really tolerant. I told her that the first orgasm I ever had that I could remember involved that picture. She said NO WAY and said her first one involved the same picture! I described it some more, though, and she took it back. She thought I was talking about something else. But that was the hottest.

I looked at my Dragon magazine archives... that LOOKS like a mock of issue #46. Which had a very different illustration. Whatever you have there must be unique, great find!

Or you're just messing with us. Heh, you got me there...

In the back there were ads for the next series of Arduin Dungeons.

V: Tower of the Beast

VII: Paths of the Dammed

VIII: The Bones of Whelmed Kodath.

PS- Those were all REAL dungeons too!

That is an awesome mermaid painting. Anyone know the artist?

I think they've still got a Giganta at Cook Park in Placentia. It was one of the cool pierces of playground equipment we used to play tag on.