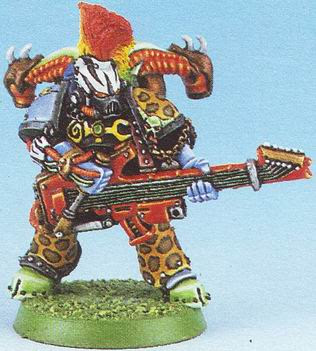 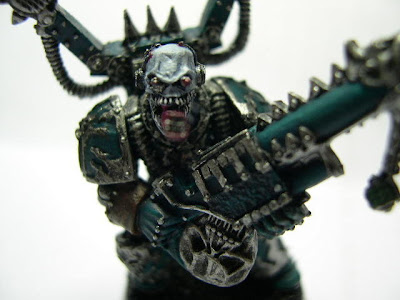 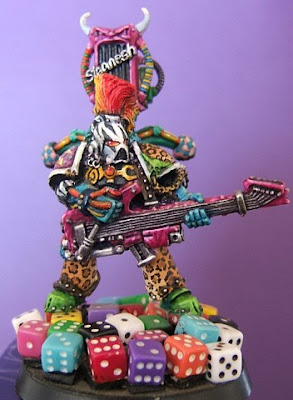 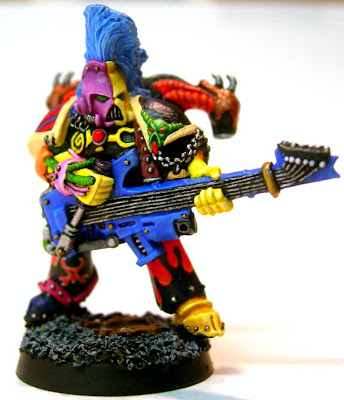 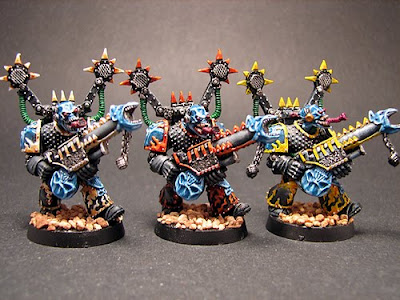 Also, yeah, chaos marines are awesome. I played a wee bit of WH40K:RT back in the early 90s and loved the 40K take on the forces of chaos.

I hate that the newer marines look so boring. These guys are the sex.

If GWAR and Hawkwind toured together.

They are no match for the Goff Rokkers

I always wanted to build a cool noise marine army, but my terrible painting skills nixed that.

And daemonettes are their groupies, of course. ^_^

Badassery in spades, and buckets.

Careful with that axe, Space Marine.

I had to know someone would beat me to it. Battle bards, for the win.

TOTALLY METAL!!! (and the metal, as it turns out, is lead)

I own one of these and I never noticed that there is a little bolter on the bottom. Cool.

I'm talking about the older ones.

Cool, I imagine that behind some of those gasmask helmets is Bootsy Collins.

I think that the Noise Marines exemplify the most awesome qualities of old 40K.

This is a perfect example of what was once so brilliant about 40K. The aforementioned Goff Rokk band are another. It's all so boring and serious nowadays.

If my Rogue Trader campaign had continued, my players would have run into Noise Marines. It would have been wonderful.

I have a lovely collection of these dudes...

Gotta agree, 40k Bards.
So Zak has effectively out argued himself on this one! BARDS RULE!

GO FORTH AND AMPLIFY.

Now that sounds kinda cool. Not much for GWAR, but I love me some Hawkwind. Well, mostly the Song of Swords, but still. And Needle Gun, love that song.

Oooo, nice one. I can totally see it.

When the original mini first came out, everyone thought they were Imperial. The fan boys were all over how cool they were. When the White Dwarf with the background and stats came out, they became "lame." I bought them up real cheap and painted up a band.