Ever since I first saw the Oriental Adventures event charts back whenever I first saw that they have haunted my DMing brain.
I knew what to do with ninjas and repeating crossbows, but this... 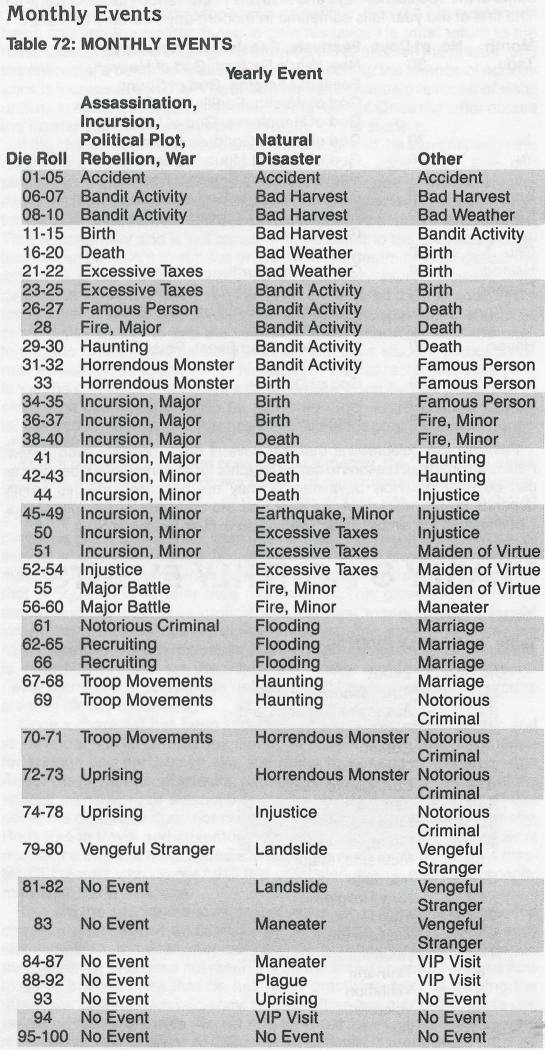 ...always seemed to be the tip of the iceberg of something cooler and better that was like it but not quite it.
Like rolling to figure out a calendar of macro-level (fairly mundane) events for the campaign was kinda sorta getting close to scratching some kind of itch but in the wrong place and nowhere near hard enough...
I think I figured it out.
______
So:
If you have a decent sandbox kit--like the Majestic Wilderlands or some maps you drew yourself--you basically have an atlas. Locate your players in space and that tells you a lot of what you want to know about the adventure they're having that day.
The gaps in what you know are filled in with stuff you just made up or with things rolled up on random tables.
What the Oriental Adventures macro-event tables were about is creating the session's adventure by combining where the PCs are in physical space with where they are in time. That essentially combines the two inputs--space and time--into a breeder table which spits out a unique adventure without much work every day.
So I was thinking, since random tables (which I'd be using anyway) are basically just lists of "banked" ideas accessed at random, why not bank them in a different way and make a kind of combination DM session notebook/almanac? Each page is mostly just what's already in my DM notebook--a blank book to draw maps I need that day, make notes, tick off monster hit points, etc.--but like those daily planner books they sell it has a few ideas "banked" each day, the same categories every day: weather, Oriental Adventures-type events, that session's theological/astrological situation (Crocodile God ascendant today, bite attacks do +2 damage), etc.
Do a handful of spreads ahead of time (I just did 7 sessions--7 spreads--to start with) in advance and you've got a loose, improvise-upon-able framework that nevertheless will spit out campaign info when you need it for the foreseeable future... 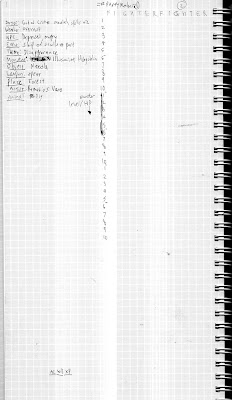 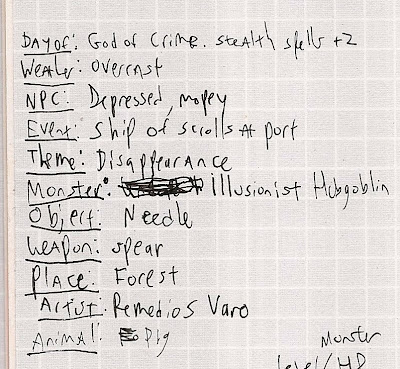 __
A couple notes:
-All this stuff is just backup-it's here to supplement when improv is called for.
-It's entirely possible none of these notes will be useful in a given session, so I kept it short. The "monster" for example is only there for if whatever else is going on in the campaign that day doesn't spit out a monster when I need one. Ditto the NPC.
-However, no matter what it will probably be nice to have all my notes for any given session on one 2-page spread and I always use scratch paper so there's that...
-"Artist" indicates who I am imagining the session as drawn by. This has been useful int he past for helping me improvise--I'm sure WWFrazettaD has helped quite a few DMs when a hexcrawl went off the rails. My almanac notebook has 35 spreads. We'll see how long it is before I'm scraping the bottom of the art barrel and the players are complaining that everything is kinda pseudoreal but irrationally bronzed and kinda pointless and I look down and see it's Jeff Easley day...
-This isn't an in-game day-by-day calendar. It goes session by session.
(-So if the players somehow manage to--for example--predict the weather a few days in advance, the weather they find out trumps the almanac's weather for whatever session they get to it, since the almanac is not so much a calendar as some session notes in order by the real-life day I plan to use them.)
-Place to record PCs AC and Will (perception check ) and xp for the day at the bottom
-Over on the right of the full page it says FighterFighter (and keeps going FighterFighterFighterFighteron the right hand side of the spread) because Fighter has 7 letters and an average d20-system 1st level fighter has about 7 hit points I use the grid to give monsters i just made up hit points in terms of how many 1st level fighters they are equal to.
-It works like this: going from left to right gives you how many PCs the monster's equal to, going top to bottom says what level. You draw a box covering all that territory to get how many points a brute monster (bear, giant, etc) of that profile should have.
-A wizard or equivalent monster (like a medusa or other mastemindish fiend) has 2 hp per die so you only use the "F" and "I" columns.
-I know, confusing, but I've been doing it for years, works for me. Basically--the red box indicates the hit points of a 6th level brute monster equal to a party of 4 PCs. The blue boxes (combined) indicate a 7th-level wizard/mastermind type monster equal to a party of 6 PCs.

Sounds good to me.

I did something similar but using only basic data, not adventure hooks.

My starting area was on a coast line (well, major river next to a coast line) so I filled out a calendar with categories for weather, high/low tide times, phase of the moon, a note for religious or other holidays, and sunrise/sunset times. I worked ahead by a week or two, and I'd physically mark off the days.

Also, most of the time I'd just steal the data from the real world, and had a bunch of sites bookmarked to look it up on the fly if I hadn't prepped (or the players decided to skip over boring time and used up my calendar faster than expected).

It has been a long time since I have seen that chart from oriental adventures. I use to make up a calendar, unique to each campaign, to count off the days and keep track of the seasonal changes. I like your idea for a more detailed session guide and especially like the idea of a different god/higher power influencing the daily activities of the party.
ColKG

I also wanted to add, the chart that you posted also makes a great "What's been happening in this village/area/region since you last were here" chart, too.

Like as in, on the fly, players return to the border town of Gronkk. They haven't been to Gronkk since 3 sessions ago, so you decide that represents 3 months. Roll a 28 (Fire), 6 (Bandits), 72 (Uprising). So since you last were in Gronkk, a wizard ignited a fire that burned half the wall on the western side, along with the guard barracks, killing many of the town's defenders. Since then, bandits from the forest have been raiding at night, taking advantage of the weakened defenses. Village leadership is doing little about it as time drags on, and the population is getting restless. There have been rumblings now, and the Mayor is laying low out of fear of reprisal. There's about to be an uprising if the mayor doesn't stop the raids, get the wall rebuilt, etc... So in addition to whatever brought the players back to Gronkk in the first place, now you have to deal with that stuff, too. Or, you know, get mixed up in that stuff instead. :)

Interesting ideas Zac. I just bought a copy of OA a few weeks ago. Had been talking to someone about Chance Cards in early Blackmoor ('71-'75) and someone mentioned that table so I bought OA to see it. Arneson's chance cards worked much the same except he wrote out random events on cards and had the players pick from the deck. A second deck contained "gypsy sayings" which were vague prophecies only he knew the meaning of.