This "Vornheim" Is Naught But Rot, Rubbish and Desperate Tedium

Vast is Vornheim, The Grey Maze, its towered alleys sprawling through the winds of the polar plain like a long-spined insect frozen in time... 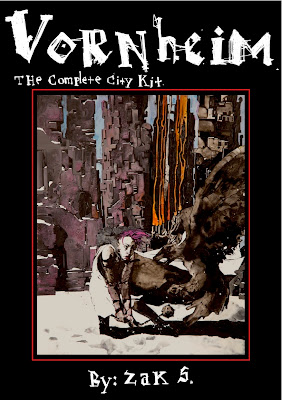 ...begins this most loathsome work of ludic literature, and, having perused the pdf of Vornheim: The Completely Shitty Kit, I wish I'd just left it there. It's so bad I also pre-ordered the print version just for the pleasure of burning it.

Here are some of the low (and Will-o-Wispishly dismal) lights from this unabashed attempt to crush the smeared black carbon of the author's obviously inebriated "adventures" beneath the weight of his massive ego and thereby transmute it into foul lucre with which to fuel his squalid vices:

-As one of the grotesque sycophants who slavishly prostrate themselves beneath the cro-magnanimously projecting lower lip of this "unique mind" in the hope of catching every stray foam-fleck dripping therefrom has pointed out, it is a treasure trove of, erm, incomparable gaming material such as:

13: Trial by pie: The defendant and prosecutor have 24 hours to prepare as many pies (1 foot diameter) as possible. The accuser then consumes any one of his/her pies as quickly as possible. The defendant must then consume any one of his/her own pies as fast or faster. The accuser then must eat any one of the defendant’s pies as fast as that or faster, and then vice versa and then the sequence starts over until one party or the other is unable to finish a pie in time (and therefore loses) or runs out of pies (and therefore loses). The winner is entitled to any and all remaining pies.
-- p59, Legal Situations

The gentle reader will, I'm sure, be miles ahead of me when I point out this is, indeed, a poor use of Pies--both wasteful and freakishly inimical to refined digestion.

-Page spreads contorted and contrived such that all information needed to interpret location maps is thrust pell-mell beneath the eager and unwiped noses of such Game Masters as see fit to employ these ill-conceived loci. 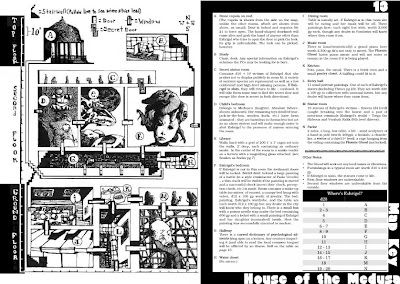 (And, you'll note the Kindergartenishly large print borders to aid the drooling patrons of this unworthy Kit find disparate parts of the book with an alacrity no doubt far surpassing that with which they could find their asses or elbows.)

-Pathetic "drop-die" instant generation tables for such common game fare as thieves, guards and local animals requiring the obedient and spoonfed Game Master to drop a d4 directly onto the charts printed on the covers--barbarically useless if, like any reasonably experienced and sophisticated Role Player, you play on the moist burgundy carpet of the local public house across from the community center after being ejected from the more traditional seating by other patrons after politely asking if the channel could be changed, for once, to something other than Sky.

-It is, naturally, littered with the author's own borderline autistic scratchwork... 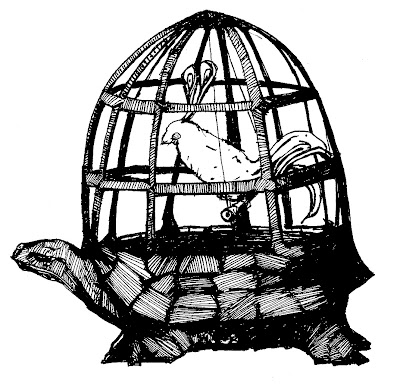 -No less than two entire pages of so-called "Player Commentary" (translation: subliterate gibbering from vacant fornicators) including this Hope Diamond of speak-much-say-nothing from the infinitely-irritating, tattoo-bespattered and dolorously bespectacled "Frankie":
If a duchess came in and wanted a special haircut for a ball then I wouldn’t cut it, I would dye it. I would braid it and make it crazy and big and people would be like “What the fuck, my hair’s so crazy, nobody else could have this hair because I’m important!

-D100 random building and NPC tables including such tradespeople as bookbinders and cheesemakers! As if the playing of Roles had the slightest thing to do with the making of Cheeses.

-Ham-fistedly wrought and, to this reader, unnecessarily and disturbingly suggestive maps and diagrams 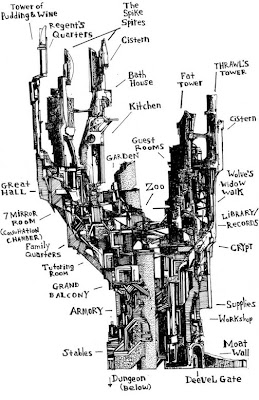 -Three adventure locations, fully stocked with monsters, each more vulgar than the last.

-New and no-doubt-drug-inspired rules for such insipidities as Fortune-Telling, Trials, and the Searching of Libraries.

-"Tips" (not unlike those the leper left to the prostitute) designed to lubricate the passage of players through the obscene inanities of this staggeringly rudimentary vision of Urban Adventuring.

-And, in crowning insult to the artform, and, no doubt, as the result of unsavory postsodomy backdoorisms (on a scale that one of my delicate sensibilities hesitates to conceive) with Paizo and the Wizards of the Bloat, there is a conversion chart permitting such nancy Game Mistresses naive enough to wallow in this filth to convert the appalling creatures of Vornheim immediately and without hesitation into any iteration of The Game, including the atavistic Fourth.

As I peruse these 64 mind-numbing pages, I can't help but remember Pope Innocent X's words on the Treaty of Westphalia--this Kit is "Null, void, invalid, iniquitous, unjust, damnable, reprobate, inane, and devoid of meaning for all time."

Purchase not this monstrous shite.

Email ThisBlogThis!Share to TwitterShare to FacebookShare to Pinterest
Labels: april fucking fools Vornheim is the best gamebook ever DUH, reviews

But does it include stats for the Dolorous Spectacles?

I bought this. It is entirely useless for my modern day Call of Cthulhu game.

Will it be available as PDF only? I'm too poor to buy print right now :/

It should be, that was the plan-- but James is in charge of that stuff, better ask him

@kelvingreen - I bought this. It's gonna be incredibly useful, for my LL campaign. :) Thanks Zak and congrats!

I'll wait and see.
But I want it :D
Maybe I can scrounge enough via paypal donations :F

Sounds like a total waste of my time and money.
I ordered it.

I'd rather gouge my eyes with a red hot poker than buy this.

i'm downloading the pdf right now, just so i can have the pleasure of burning it.

I pre-ordered late last night, downloaded the PDF, scanned its pages for half an hour or so, then went to bed. I have just awoken from dreams of a wintry city dominated by claw-shaped towers, although my dream-Vornheim was inhabited by myself, my friend Kate, some stray dogs, and thousands of animated statues of all shapes and sizes.

This is moody, flavoursome stuff. Hats off.

Westphalia! Nice pull. Even more hyperbolic than the rest of the review, and still funny.

*looks sneeringly down on all mere toadies, bootlickers, yes-men, groupies, fawners and slaves*

You and your hobbies.

Pre-ordered it, downloaded the PDF, quick read thorough, and I like it. Eagerly awaiting the arrival of the printed version in a few weeks. Then I can take it with me to my games and use it to its fullest.

I love your artwork, maps, and even the fonts for the headings and page numbers. I am looking forward to trying this out with my group and seeing how much easier it makes wandering around cities.

Congratulations on a piece of excellent work.

Pre-ordered, now just waiting for the bank transfer to go through so I can get the PDF.

I'm pretty sure that this will be the best null, void, invalid, iniquitous, unjust, damnable, reprobate, inane, and devoid of meaning for all time -product I'll buy this year.

Anyone who is looking for a pirated illegal torrent, just send me an email!

What an awesome bunch of crap... I really want to see more of your stuff printed, Zak! What's next?

I stayed up all night to pre-order this crap early only to be so brain addled by its utter emptiness and pointlessness that I wound up posting a stream of consciousness blather praising it.

thanks for the conversion chart,

4e is what I usually play I'm afraid

feel free to let me know of your criticisms, but I'm sure I've heard most of them

also, about how much does this run in American dollars?

i played type 4 once, and had fun and wrote a post about it. but i don't really know it so i had my friend Darren write the conversion chart.

With shipping to N. America, it came out at just over $20.

Zak, the book is awesome and I can't wait to use it. And I love the Vol.4 graphic theme. Thanks!

"As one of the grotesque sycophants who slavishly prostrate themselves beneath the cro-magnanimously projecting lower lip of this "unique mind" in the hope of catching every stray foam-fleck dripping therefrom has pointed out, it is a treasure trove of, erm, incomparable gaming material such as:"

I suppose I shouldn't be sad. It was a good life.

I've played one campaign of DnD 3.5. Against my better judgement, I ordered this. I hope it's good, Zak.

...was this written in the style of Ignatius J. Reilly? Because it really sounds like it XD fantastic stuff.