Nothing is Fluff In A Fairy Tale 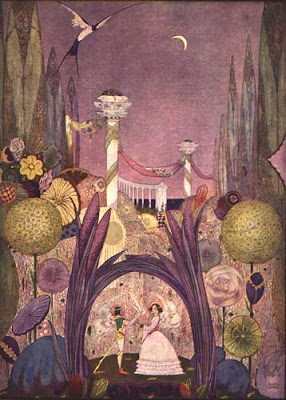 It was the Asian wizard class.

Pretty much it was like the AD&D wizard except the arcane sorcerers of the exotic east have to adopt a taboo--or else they'd lose their powers. Some examples

I remember in my wayward youth, being a good little munchkin, I was trying to make a Wu Jen with a taboo that wouldn't get in my way. And I couldn't. Can't eat meat? What if we're starving in a jungle? The treasure thing? Forget about it. Daily offering? What if I'm paralyzed for a day?

In other words, although most of these taboos have nothing to do directly with the mechanics of killing things and taking their stuff, any one you could imagine might get in the way.

Because in an RPG, any characteristic of your PC could possibly become an issue. That's how RPGs work.

Or, to put it another way, although wargamers divide rules into "crunch" (numbers) and "fluff" (background info), there's no fluff in pen-and-paper RPGs. It all matters, or could.
________

What I really like about Wu Jen taboos is they're one of the surprisingly rare examples of true "fairy-tale logic" in D&D. By that I don't mean it's just unscientific or magical, what I mean is the rule has the aesthetic qualities specific to fairy tales. I use this "logic" a lot.

The most prominent characteristic of fairy-tale logic for DMs interested in promoting it is that it deals in absolutes, not percentage chances or marginal cases. Halflings having better saves than humans isn't fairy tale logic--elves being immune to sleep spells isn't quite fairy tale logic but it's close, elves never sleeping unless they want to is fairy tale logic.

In fairy tales, effects follow causes with the inevitability of contracts between gods. There are no half measures. This makes the mechanical manifestation of fairy-tale logic nice and clean. Fairy tale monster powers should have no save--though they could have loopholes (vampires are the classic example: except at night, unless you invite them in, etc. etc.).

(Interesting sidenote: fairy tale logic is the opposite of science but it is very close to how computers "think". Either/or, if this then not that, etc. It is easier to create a video game that works on fairy tale logic--"pac man can only eat a ghost after having a power peller"--than one that simulates reality.)

Like for example one of my least favorite things is the demon defense hierarchy: minor demons require a +1 or better magic weapon to hit, middle ones require +2 or better to hit, bigger ones +3 or better to hit, blah blah. That just ensures that the PCs have to have a mood-crushingly big market in magic items if they ever start fighting demons. Now if the demon can only be hit by a recently-despoiled virgin that has kissed a king during a war--well then there's like 9 adventure hooks right there.

My fantasy reading was never sophisticated as a kid. I put a lot of time into the Xanth books. So much so that I still have the draft of the d20-ish game that I created back in 92(?). The magic system of that world was what you're talking about. If you had the magic power to "stick two things together" that's what you could do and you had to talk yourself into situations where you have two things that you can stick together.

The single paragraph of my draft was less than mechanically balanced but it would have been hella fun to play.

1) I completely forgot about the Wu Jen taboo, thanks for that.

Very nice distinction. And I am addicted to finding ways to add this kind of logic in the game. I want to pack as much coolness in with the least amount of overhead.

Sometimes, at character generation, I give characters of any class taboos in my campaign. Makes for fun role playing situations and has a precedent in Celtic mythology, which my D&D campaign has a strong grounding in.

I'm a huge fan of GURPS Cabal for sieving all historical occultist stuff into suggested modifiers for magical action; as a halfway point between the rigid fairy-tale logic and the fuzzier hermetic allegory of neoplatonism and alchemy. A gamey appendix to Richard Cavendish, I guess. So the +3 Fighting Shit sword you need to kill the demon is made from the lifeblood of a child (+1) from a military caste (+1) you ritually sacrificed to Crom, God of Fightin' (+1). Pac Man making his own power pellet out of two other pellets and some mashed-up cherry.

I guess the idea is... It's kind of a magic toolboxes to hand to players, or the bucket and shovel and grab-bag of toys to hang out in the sandbox, so you get to see what they build with the fairy tale logic.

The line about vampires got me thinking, if they're turned during a summer night at like 3:00 in the morning and nobody answers the door because they're all asleep, the new vamp is a bit screwed really. Just have to hope they have a responsible sire.

A. There are things in fairy tales that are fluffy. Werewolves are very fluffy.

B. I remember the Asian wizard class. I wanted too but it never worked out.

hüth's suggestion of contextualising each positive modifier with an adventure hook appeals, as a sort of bridge between styles. I'd prefer pure fairy-tale, but the whole 'express concepts through gameable effects' thing is a hangup for enough people that the compromise becomes a necessity.

Huh. Weird. I did this in a D&D game recently. My guy has to kill and eat one rare creature a week, or he loses the immunity to indigestion, alcohol and lead poisoning, and stomach diseases.

You know, those old OA classes have a lot of juice in them. I've long thought that reskinning them for occidental play could totally work.

Another great source for mythological and real life taboos that are far stranger than anything my mind could ever have produced in its most fevered dreams is the Golden Bough.
It was THE anthropological book back in the day (and if you're lucky enough to find one of the later copies with turn of the centuary phot's you'd certainly know why with a quick flick through, sadly my copies a bit to old to have them...), there are so many great ideas ripe for plunder in that book that it's repaid whatever it was I forked out for it over the years :D

(Oh and I just gotta throw in from OA I LOVE the Hengeyaku or however it was spelt, shape shifting nature spirits that turn into inconspicous animals like cranes, badgers or sparrows, whats not to like?)

Dragons in Dungeons may or may not be here...

my favorite part of The Golden Bough is when they put the frog on trial.

I love the fairy-logic approach to magic and enchantments and magical monsters and demons.

My question is; what strategies do you use to harmonize when the all/nothing fairy logic intersects with the D&D game's (for lack of a better way to say it) "roll and see what happens and then go with it" nature?

For example; Only a blond haired girl with a silver sword can harm the Hairy Beast (fairy logic style).

So you get the girl and the sword and confront the Hairy Beast. Do you now play out D&D combat as normal or would the girl simply slay the beast (no rolls, its fated to be), or something in-between (like give the girl huge bonuses)?

Just curious as to what you (or anyone else out there) might do to handle the intersection of fairy-logic and traditional mechanics.

You'd probably want a roll to hit at least. Are we talking Hans Christian Anderson or, like, Gawain and the Green Knight?

Although, it'd be awesome if the chosen one was, like, six years old, and the party would have to arrange a complicated trap where the monster was impaled on the sword while she was holding it. Fairy tales put a lot of emphasis on finding ways around shit, after all.

Bitch has to roll like everybody else. I'm not writing a whole new game here.

Nice insight on a central Old School argument: what I've called "text adventure" logic, that is, solving with verbs and descriptions rather than numbers. Just hard to touch the coolness of, for example, how you dealt with the wall of ice in ZORK II (rot13: gur qentba frrf vgfrys, yvxr n cvtrba, nggnpxf vgf ersyrpgvba jvgu sver, zrygvat vg).

I think this could tie into the RPG's favouritism of fantasy over sci-fi. Both are speculative genres where the rules of reality as we know them may be rewritten, but it's in fantasy that the world works according to the narrative and thematic framework our brains work off of.

Maybe, yeah--and it might be related to the "imaginiability" issue with non-licensed sci-fi vs fantasy. I say "cyclops" and we all have a mental picture to work off of. I say "Martian" and we need a picture