Characters My Players Would Totally Want To Play Round Up...

I don't know anything about Magic (the game) but I always appreciate it when people post pictures from games I don't play so I can see the art.

Here are some characters from WOTC's first baby that the girls would be all over... 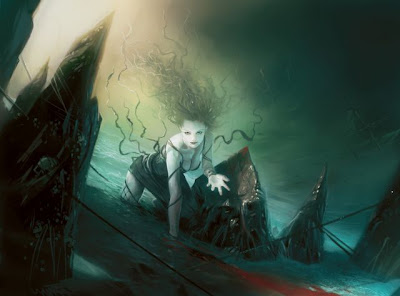 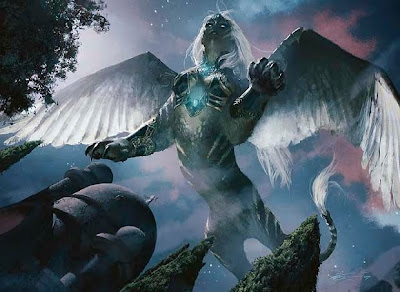 A sphinx in a bustier. That's innovation. And it's amazing how the weirdness and stylishness of the picture is actually more powerful than its cheesiness. 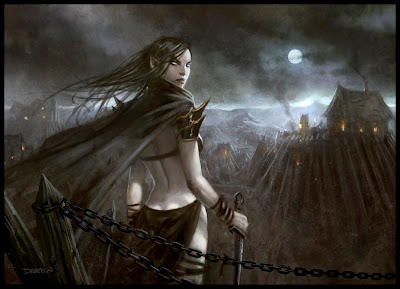 My least favorite--the technique's a little rough and the blatant ass-cleavage-in-moonlight could've been better served by something other than a lazily-rendered brown cloth that's seemingly immune to wind. However, the killer stare and the shading on the lower chin guarantees the girls will totally want to play this chick.

What the heck is the light source(s) supposed to be in that last one?

I don't play Magic either-- I figure, if I can get a bunch of gamers together in a room I'd rather GAME, anyhow-- but I've always been impressed by their art & surprisingly enough by their worldbuilding. They have pretty cohesive high-fantasy stories behind their booster sets.

Is Magic not GAMING, then? I's confused.

In case people weren't aware, you can search by artist name on the WotC card database. If you're into Magic's art (like me) it's good for tracking people's shit down.

And the most recent set's art is pretty awesome.
Here's some pretty things.
Here's some more. ...And more.
Hey look monsters

Please tell the ladies that they themselves still are way more gorgeous and impressive than those already amazing peices of art.

@Kel: All elves have bioluminescent buttocks. It's how they attract mates.

We need stats for firefly baboons, the missing link in elfvolution.

A lot of the art for MtG was really fairly awesome, although a lot of it was also pretty devoid of that "it," you know, the "fuse that drives the flower," and all that. But a lot was really good.

As Mordicai said, there is a fair deal of story and flavor behind all the sets. And all the nice pictures are easy to borrow.

This fellow right here has been burning stuff up in my campaign: http://gatherer.wizards.com/Pages/Card/Details.aspx?multiverseid=205381

I kind of want to do this excercise with my own group, though I don't think I'd be able to use Magic: The Gathering as a source. Not anime-y enough.

i could do it with anime but it'd be too easy. And nsfw.

The leader of the pack can also use Prismatic Spray.

Topless Robot just ran an article on the subject of MtG art that's worth checking out: http://vbly.us/10listmtg It's a 10 best and worst list with some interesting commentary.

I can't decide if the flavor text associated with the vampire helps or not: "Poor little sun-dweller out past curfew. And to think, you might have survived if it wasn't so close to suppertime."