Still scraping the paint and patching the holes on the Fiend Folio.

The Carbuncle is like a Conan-comic-short-story-type monster that has a valuable gem in its head and it can be persuaded to give up the gem but can't be made to give it up by force and it also has psionic powers that it uses to subtly sow dissent and bad trouble among the PCs. Look, it's complicated. I like the carbuncle just fine, though I redrew it as a 3' bug with gem eyes instead of a cute armadillo with a gemmy forehead because, hey, it's Tuesday. You can click to enlarge all these pictures but the sketchy carbuncle is actual size. 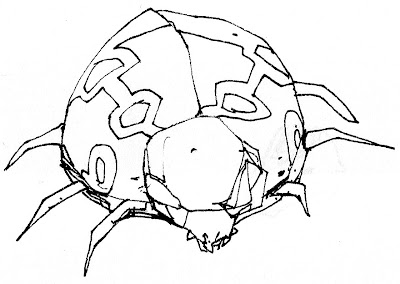 Likewise entirely unobjectionable is the Caryatid Column which is not only a fine monster and far more exciting than the doric, ionic and corinthian columns but is also a good example of how reading D&D stuff makes art history classes easier.

The Caterwaul, on the other hand is a lame and underconceived 4 hit die time-waster whose schtick is it has a keening screech which--how inventive--inflicts damage and also is real fast. I have decided that actually a Caterwaul is the result of a specific kind of curse cast on a witch by sister-witches which ("sister-witches which"? Strunk, White, a little help here?) results in the distaff sibling being melded with her own familiar--the resulting abomination is often kept around as a pet, as a slave, or for simple amusement, though the caterwaul occasionally comes out smart enough to resist its own subjection and sow inter-witch mischief. Cat caterwauls are the most common, though a caterwaul curse will meld a witch with whatever familiar she has. The screech can stay, though I think it needs some dizzy-making or hallucinating effects added. 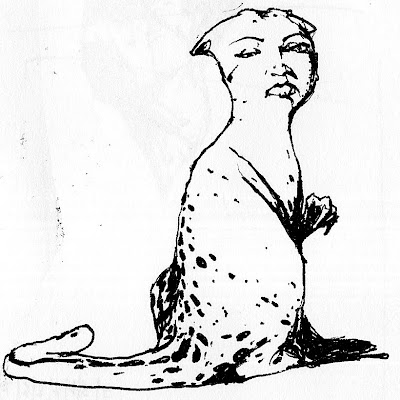 I've already done the CIFAL--but anyway here's a picture of the Cifalganger... 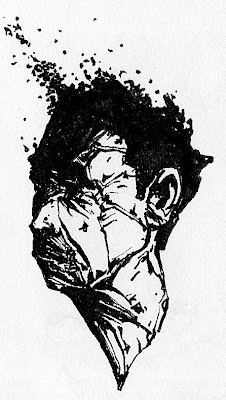 The Clubnek is probably a product of whatever exceptionally annoying form of ornithomaniacal brain-damage produced the Achaierai, Axebeak, and Aarakocra. A 1 hit-die giant ostrich. Anyway fuck that. It's not a Clubnek, it's a Neckfork and it's not a monster, it's a weapon/eating utensil. It consists of the withered, hardened neck and open beak of an ostrich-like creature which goblins, demons, or otherwise Hieronymous Boschean monsters in your campaign use to poke people through the bars of bone-cages while giggling like bastards.


The Coffer Corpse is an undead creature with a totally fucking metal Russ Nicholson picture(top row, 2nd from the left) and largely uninspiring mechanics which make it pretty much another zombie except its thing is it pretends to be dead for a bit then comes back a la monsters in all horror movies ever.

I love watching Russ Nicholson draw skeletons, but in a game of describing and imagining, if it looks like a skeleton, the players will think of a(nother) skeleton. So, going off the information that:

1) they have--according to Russ Nicholson--hair, and
2) they are often found in "stranded funeral barges"

I'm going to say the Coffer Corpse is actually not a full-on skeleton nor a just-dead zombie but a bog corpse. Withered, with limbs missing, reeking of gasses-with-unfortunate-effects-on-our PCs. Also, since the burial went awry, I am going to say that the Coffer Corpse, despite being extremely ugly, still has an intact soul and may indeed be a very nice guy underneath the leathery eyes and milennia of torturous unlife. 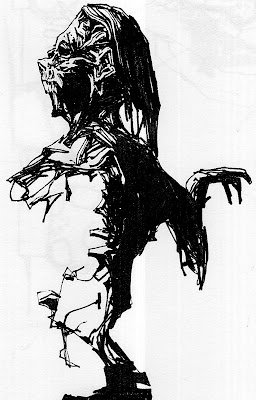 I have precisely the opposite problem with Crabmen--perfectly usable idea, stupid, stupid picture. So here is another picture. Things to be aware of when including crabmen in adventures:
1-They're blue-and white (caste system markings, you know the deal), not red
2-Yoon-Suin
3-Nova Express by William S. Burroughs 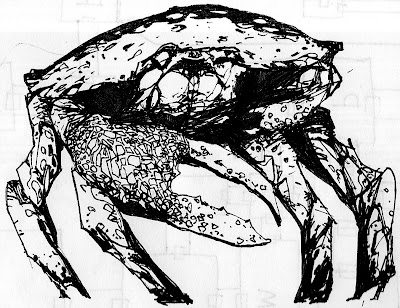 Good things about the Crypt Thing:

Bad things about the Crypt Thing:

-There are a lot of skeletons in this game already
-The insta-teleportation mechanic seems a little lively and sci-fi-ish and supervillainy for a guy who is supposed to be all stoic and immobile and dead
-Once you get past the teleportation it just claws you, which seems rather undignified for a fifth-level unmoving undead in a robe that only attacks if attacked.

Here is my new Crypt Thing. 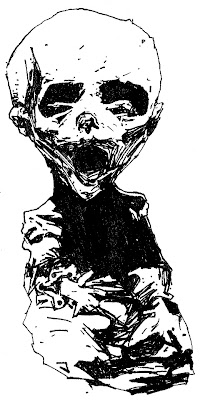 It is the spirit of someone mummified before they were old enough to understand the concept of death. The crypt thing does not understand that it is dead but is too weak to push its way out of its tomb and so wails and moans terrible undead wailings. This song disorients all who hear it (minus something obnoxious to saving throw) and forces all who hear it to wander off in a random direction for a half hour, all the while experiencing a dreamlike jumble of images from the crypt thing's short life.

Generally the victim(s) will wake up spread out all over the dungeon, and may or may not remember their encounter with the crypt thing (so it's a good way to start a "ok, you wake up in a dungeon" adventure).

Subsequent meetings with the crypt thing allow the victims some bonus to their saving throw. If touched it bites, which is ok because its gross because its a dead baby. The only way to shut it up is to kill it or expose it to sunlight, which will turn it to dust.

Those are all solid and I'd use them in one of my campaigns. I particularly like the caterwaul and the coffer corpse re-imaginings.

I dig the caryatid drawing with hands fused to the broken capital and ready for clobberin' time. And I laughed because you had to destroy the clubnek in order to save it.

The way you gently shifted the mechanic of the crypt thing to do the same thing with a different tone is just masterful. Just kind of stunned over here.

yes. Thank you. Especially the crypt thing and caterwaul.

I'm edging toward a "20 solutions for things you can't kill" post. Rendering it possibly stupid and taking away its fine manipulators is a good one.

White would say "sister-witches that" is okay, since the meaning is clear. Strunk would say the same thing, but he'd say it three times, since he had a lot of lecture time left to fill somehow.

Strunk was the kind of guy who'd accidentally summon a dry, tweedy Hastur just because he couldn't stop repeating himself.

Hmm. Would a Stone-to-Flesh on the cap the Caryatid Column is holding let her set it down, and improve her mood?