Another One Of Those Posts With Lots Of Notes On Things

-Despite the fact that they require looking numbers and letters up on gigantic charts, fights in Rolemaster feel somehow more like fights in real life than fights in any game (including video games) I've ever played (feel like I've already said this on this blog--maybe I have?). You can prepare and slide the odds in your favor, but when the time comes, you just do something, hope it works, and then, next thing you know, you're on the ground or with one arm tied behind your back and you do something else, and cross your fingers again, and a few seconds later you're just glad you aren't dead. In D&D you seldom get that roll -wince- -wince- -wince- -sigh- effect.

-More on our Rolemaster games when I get a minute. Busy doing the cover for Vornheim.

-Ever seen that game Rune Wars on a shelf in your FLGS? My friend bought it. Cost him 100 Bucks. That box is the size of a small suitcase and is, no kidding, 90% air. The whole thing could actually fit in a Monopoly box. They just made it that big so you'd think it was worth 100 bucks. Is it? Don't know, didn't play. It literally took him so long to unpack all the (tiny) pieces that me and another friend played 2 games of Citadels while we waited (fun game, by the way) and by the time he was done we were too tired to do anything else.

-Why is Willow such an under-appreciated movie? Ok, we can all name like 90 reasons it's under-appreciated. But it was the first western movie with kick-ass kung-fu-style swordfights and for that I was, as a lad, grateful.

-I cannot remember what gameblog tipped me off about the (very poorly named) Kabod, but since it looks like this: 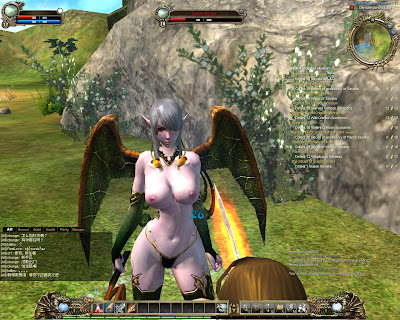 I am 100% certain Mandy, Satine (bing!), and possibly Viv (addendum: bing!) will become obsessed with it & play it day and night for months on end, so thanks, whoever that was.

That picture is just wrong. How is she supposed to fly with wings that look like that?

I hear this conversation nearly every week around here:

Girl 1: "Oh my god, I love these shoes but how am I supposed to walk in them?"

Girl 2: "Who said anything about walking?"

Which, so long as you don't live at Bata Motel, seems worth pointing out.

Willow is sooooo super rad. I love the evil (Warriors of Chaos) army and their cool Warhounds.

i'm pretty sure the tits can be filled with hot air... the wings are merely there for guidance

I enjoy Willow quite a bit. One of my old gaming buddies commented on it's lack of success saying something to the effect of the mainstream movie audience at the time just wasn't ready for a movie with Willow as the main character. And how if Madmartigan had been the primary focus of the movie it wouldn't have necessarily been a better film, but it would have likely had more commercial success. I'm not certain he was right, but it's a plausible explanation.

If you enjoy Rolemaster, Blacky the Blackball is putting together a mash up RPG of it and D20 D&D. He is calling it Blood, Guts, & Glory. He is in the writing stages right now, but you can get a work in progress from his website.

I get much the same feeling in combat when playing Riddle of Steel and Burning Wheel. the Mong Runequest isn't as realistic as any of the above imo, but still feels more true to life than most.

But hey, realism was never the point of D&D combat, or I missed a memo. In fact I'd argue the contrary, the more you try to twist the D&D combat rules to be "realistic" the more they suck. Keep it abstract and leave the realism to description of outcomes and common sense.

D&D combat is plenty realistic, it's just not granular. Granular doesn't mean more realistic any more than saying O.J Simpson killed his ex-wife in about 3 minutes is less "realistic" than going into great depth into where exactly the stab wounds were.

If you want to have a debate here over "realism" in combat, have fun, but be apprised it has nothing to do with what's in the post.

I've been separated from my Rolemaster books for years now, but I have fond memories from highschool. Rolemaster was actually the first RPG I ever played on the regular other than that it had only been AD&D one-shots with my older cousins. Rolemaster Battles were almost sadistically complex and could seemingly take hours yet totally engaging.

First time I played the game - I spent a day making a character - two minutes to run into a vampire bunny and prolly thirty minutes for it to kick my ass in fine detail. Great times.

"Willow" was a really good movie that fell victim to its own overzealous marketing campaign beginning with its first "Forget all you know" trailer. Plus it came out in the era when the the good "Star Wars" movies and "Cocoon" were recent memories, and it was produced by Lucas and directed by Howard. So everyone went in expecting, well, what we eventually got in "LoTR." But as good as it turned out, Lucas and Dolman's script wasn't quite Tolkien. It was leagues better than "Beastmaster" or "Conan" at least.

Now I'm not a superstitious man -- but if I were and someone told me that an evil wizard had put a hex on all films featuring little people in lead dramatic roles I'd be inclined to believe them. However I am a cynical man so I'm forced to conclude the film-going public is just a bunch of bigots. Despite the fact that so many people saw it and Warwick Davis knocked it out of the park.

Zak, you buried the lede about this kabod thing - that thanks to its "realistic destroyable armor system" (sic) you strip the enemies as you fight them. And then you...

...kill them. And that's where I lose interest, I'm afraid: equal opportunities interactive stripping MMORPG? OK. That ends with you killing the other person? That's where my sex and violence tips over into sexandviolence. It's probably a good thing you held this back until after the talk with Greg, I guess.

If you would like to go tell the girls their taste in video games offends you and/or is bad for them, be my guest.

Mandy's blog is over their on my bloglist and satine and viv's twitter accounts are listed.

Weird you mentioned Willow, I watched this again the other day. I think one big issue was it being a movie without real "cross-over" appeal, whatever you may interpret that as. I think LOTR had the help of some truly amazing effects, epic-scale (another over-used term) fight scenes, and was hyped for so long, you couldn't help but get a bit of a snowball effect going in the marketing dept when it finally got made.
Willow, however, was just a good movie with a simple plot that had some cool set-ups, but not much to draw people in who wouldn't give it a chance anyways. Val Kilmer was the only stretch out of the fantasy realm there, and his career has always been up and down anyways. How many people remember Real Genius or Top Secret?
That said, I still love the film. but then, the SO and I love Conan as well, so taste is always suspect.

No, their taste in video games doesn't offend me, I just don't like it, like peanut butter in my chocolate. I hope aesthetic comments aren't banned as a result of all this. And I'm certainly not going to make health/cleanliness arguments about it. I've read my Mary Douglass.