We are, as it were, between dungeons.

Didn't have time to do that last game.

Most of the players just finished saving some nuns.

One player is off trying to solve the skeleton plague.

One player will show up and be totally new.

And it's a sandbox, of course, so they can (and should) go wherever they feel like going.

So: I have to prepare for anywhere they could possibly go. I like prepping, since I think up the most elaborate stuff when I prepare and I am hopelessly enamored of elaborate stuff.

I figure there's about 6 likely locations the PCs could decide to hit. About half are full of NPCs I know well enough and I basically know what sort of things should be going o there, given current campaign events.

The other half are all sketchily described and I have a basic "vibe" figured for each as well as enough to keep everyone busy for an hour or two.

But then there's always that feeling that there could just be a little more. Every time I think of a trick or a trap or a schtick, or try to, I think "Oh but chances are I won't even get to use this bit, why bother. I have real life things to do."

I feel like Oscar Schindler--"Oh but I could've just..."

Here's my plan: go minigolfing with KK, Viv and Mandy, and think on it. If I think of anything good, I'll throw it in there. If not, wing that second half. 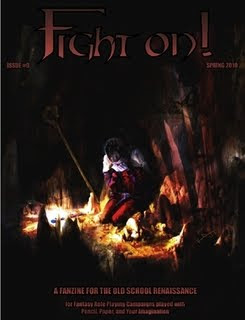 Hey look at that--new Fight On! (Including a lot of monster write-ups by me, and, apparently, some picture(s) by me, which I had no idea about).

In other housecleaning: the deadline for the Secret Arneson Gift Exchange is about a week away. If you want a Secret Arneson to write something for your campaign, let me know BEFORE JULY 1.
___________

Cool that you've got some monster write-ups in there. Worrisome they didn't ask before printing art, though.

Can I just say that I've been reading your blogs and watching the filmed play, and I really enjoy them. And I love the goblin balloons with the inflated pigs; genius stuff. Thanks :) Simon.

Yep, this should be the cardinal rule of sandboxery. It keeps the players in charge of their destiny, but also gives the GM a week (or whatever) to prepare and polish. It's how I ran my recent Rogue Trader game, and it worked very well.

As an added bonus, it also encourages cliffhanger endings to sessions.

I was going to ask about the gift exchange. I'm pleased to see it's still going ahead.

Hi Zak! Thanks for the great monsters.

The one piece of your art we used was the Tower Golem, and it was in the laid out copy of the article we sent you to proof before printing. I apologize for the mix-up on that!

We are currently in first place in the lulu sales contest for June, so if any of you have been interested in checking out print issues of Fight On! - only print sales help with the contest - the next week would be a very helpful time for us to buy them. Plus everything is discounted, lulu has free shipping (or 10% off using VACATION for small orders - this works for the many other fine products in the Old School Renaissance store as well, not just ours), and we have some special limited edition hardback compendia up there as well.

We were really excited to get some of Zak's monsters and hope to see more of his work in Fight On! in the future!