Dice I was tempted to buy, but did not, on this trip:

-A pair of trick d6s that always roll the same number, packaged along with another real pair done in exactly the same size and color at a 99 cent store. 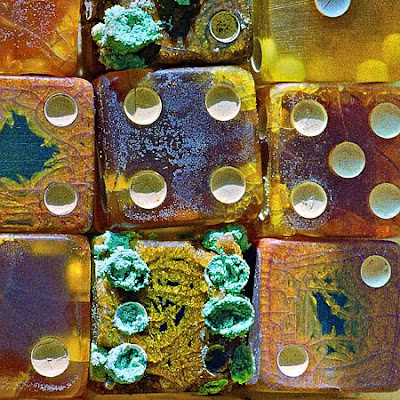 In unrelated dice news, the pictures here are some dice from my favorite exhibit at LA's Museum of Jurassic Technology--some "decaying" dice from the collection of magician Ricky Jay.

If anybody's looking to start a gameblog, there's your header image.

that picture is f'ing awesome.

Thanks for posting the link Cramp. That's awesome! Ironic that Zak posts about dice and I was also planning on writing a blog about dice sometime within the next couple of weeks LOL.

Where was this replica? Unlike TheCramp I don't think it (a replica) sounds lame, I think it sounds awesome...depending on the price. I think about getting some dice made of meteors or dinosaur bones or whatever, often. Then I think "wtf is the point of buying dice too nice to roll?"

A replica could be interesting. I have bone dice, they're nice to play with. And their finished well so it's not really creepy.

GSV -- that's what I though this would be about too. Update?

Those are great pics though. I think the Roman dXX sold for about 2K at auction.

Oh, just saw the link. Off by an order of magnitude.

All right, but apart from the d20, the sanitation, the medicine, education, wine, public order, irrigation, roads, a fresh water system, and public health, what have the Romans ever done for us?