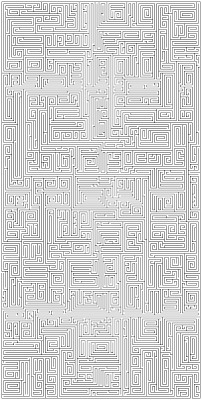 -First off, RPG blogger Chgowiz is back. This is excellent news if you happen to be a smart person who likes reading about how other smart people play the games that you play.*

His focus has always been on how the game actually works when it's right there in front of you and on getting new people to play. Of which focus this blog mightily approves.

-Y'know how, when someone casts a Maze spell, the victim has to wander in it "for a period of time entirely determined by the creature's intelligence". Well how about some of that "player skill not character skill"? Go here and make a maze to have on hand.

It also works as a cheap dungeon plan generator, if you're having one of those hungover-didn't-prep days.

-I said I was going to write a paean to Shannon, the mini-painter Reaper assigned to "I Hit It With My Axe" as soon as I was able to take a decent picture of the minis she painted? Well here's my best attempt so far: 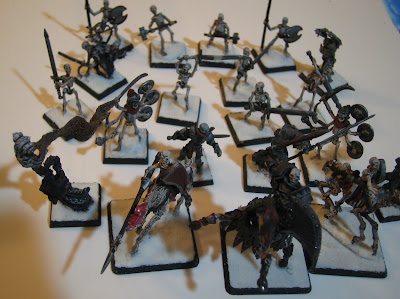 -Goblin Pigballoon Scout info:
(As Seen On TV)
The pig balloon is generally made by a goblin alchemist. The actual process involves removing the organs and bones, coating the pig with a glossy sealant (often of a gaudy color), and sewing the pig's mouth (and other orifices) shut after filling it with a lighter-than-air substance.

An average pig scout balloon can carry one goblin or one halfling plus 20 gp's weight. Altitude control is not good. The scout is usually armed with vials of standard green slime. Any failed missile attack on the balloon will have a 50% chance of hitting the pig, which will cause the balloon to descend rapidly and comically.

The scout's d20 stats are below, if you're using the old system that's AC 6.

Larger balloons made from giant frogs, giant puffer fish, and even whales have been conjectured but have never been observed. 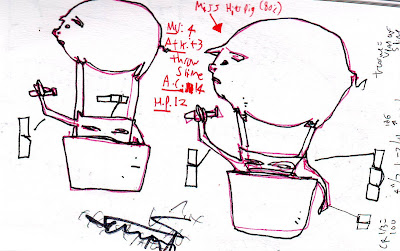 _______________________________________
*If you're wondering why Chgowiz ever left in the first place, it's because he was sick of internet drama. Those specifically and desperately interested in seeing the last straw (plus some poorly fact-checked guesses about what system my group uses) can look here. It's all over now, though, so if you have some brilliant opinion about it, bear in mind that no-one cares anymore.

Email ThisBlogThis!Share to TwitterShare to FacebookShare to Pinterest
Labels: design, DnD, etc., I Hit It With My Axe, miniatures, monsters, New Monsters

What a pleasant surprise it was to see Chgowiz return.

I hadn't been following the show much lately, but goblin pig balloons are a nice idea. I'll have to file that idea away for the next time I'm making conversions; an inflated pig can't be that hard to sculpt.

Thanks for the maze link too!

The pig balloon idea is pretty neat, but Chgowiz kind of trumps it

Awesome. I am enjoying watching your campaign and the return of Chogowiz is awesome.

I prefer Joesky's explanation of the internet drama.

This reminded me of something - Pigoon: "pigs with bodies shaped like balloons bred to grow extra organs for human transplantion"

Love the pig balloon idea...Zak, can I beg/buy/borrow your idea to translate into a resin kit for sale?

get in touch: zakzsmith at hawt mayle dawt calm

"Larger balloons made from giant frogs, giant puffer fish, and even whales have been conjectured but have never been observed."

Wizards of the Coast recently posted spoilers for the next wave of Magic cards. The updated art for Goblin Balloon Brigade has a giant toad balloon.