I Love This Book 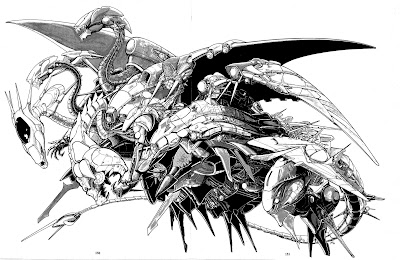 Troll and Toad sent me one of my all-time favorite RPG supplements today--Rifts: Atlantis.

From a distance (a distance I definitely did not have as a kid) the main villains in this setting, the Splugorth, are a sort of comic bookifiyed version of Lovecraftian Old Ones and their island empire is a collage of every 50-year-old science fiction idea that could be easily militarized--plus mounds of lasers and eyeballs.

The kicker for me in Rifts Atlantis, though, was the occasional inclusion of the unbelievably stylish technogrotesque artwork of Newton Ewell (a sample of which graces the top of the page there). Science fiction rpgs--being based on new ideas rather than traditional ones--need illustrations in a way that fantasy rpgs don't. And Ewell's pictures described a world exquisitely. Here technology and machinery are more fantastic than magic and dazzlingly baroque. (And this was before the anime-explosion on this side of the Pacific made this kind of thing familiar.)

The whole of Atlantis had an exuberant weirdness that seemed to take the basic Rifts ideas to their natural conclusion. The default Rifts setting was a sort of post-apocalypse with people in cities and towns (and, of course, monsters everywhere else)--not unlike D&D.

Rifts Atlantis, though, was a society of monsters. And not just Star Trek-mostly-human-with-a-few-cosmetic-changes-monsters. They were truly and gruesomely inhuman--an idea that's common enough in literary sci-fi, but surprisingly unusual outside of it. 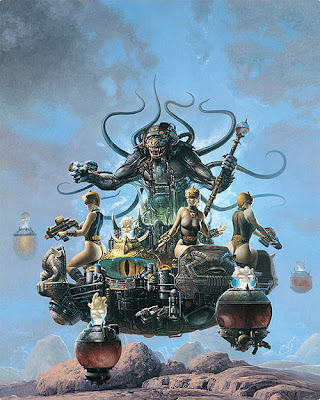 And it demanded maximum creativity--everything had to be weird. Everything was arcane or had missiles or had arcane missiles. If you were going to put a post-office box in Atlantis it would have to be weird--the metal would be made from the psychic energy harvested from dying warsnails and the stamps would be glued on with squidblood. There are Eyes of Eyelor, there's a playable PC race that's a foot long psychic slug, there are the blind warrior women being licked by lizard slavers, and it all just seemed perfectly held together by the drawings.

That was always the thing about Rifts--on paper, the the game seemed like a bad late Burroughs novel footnoted with endless lists of military hardware. But then there were the pictures--good or bad, they they were so solid, they made sense--I'd look at them and go "ok, yeah, I see it" and then it all came together and I wanted to go there immediately.

In color up there, there's the Ketih Parkinson painting of the Splugorth slaver. I'm not a big Parkinson fan, usually, and I don't love the painting, yet, somehow he manages to evoke every single pulp sci-fi novel cover you ever picked up in the 99-cent bin and went "What the holy fuck could this possibly be about? I have to buy it."

Except because Rifts is a game and not a book, the picture, of course, turns out to be about whatever you think that picture is about. Which, face it, is way better than that 99 cent novel was ever gonna be.

Nowadays there's a million high-concept RPGs with (probably) fascinating post-Alan Moore, post-anime premises, but whenever I see them, I seriously go "Ok, but you could've just done that with Rifts, right?"

(Oh, I can hear it now: whine whine whine about Palladium's mechanics. Read that and fuck off.)

D&D originally provided a little of everything--genies, leprechauns, rakshashas--whatever. I generally think of every new setting for D&D (or every new fantasy setting-plus-ruleset--that is, every new fantasy game) as a narrowing of the list of possibilities implied in D&D. Only snow-monsters, only-pre-iron-age weapons, only wizard stuff, etc. etc.

Likewise, I feel like every time somebody tries to re-do the postmodern sci-fantasy RPG I just think: ok, this is like Rifts, but with less stuff.

It's hard to sum up why I love Rifts, but I think you just came close.

Rifts sure may be unplayable-- Palladium sure may be unplayable-- but it has some gems buried in there. The best "quick fix" I can come up with for rifts is to have mega-damage weapons do their regular SDC damage to humans (et al). Hand wave it away with "a laser hole burned into a guy is the same as a bullet hole shot into a guy, even if the laser would ALSO bore a hole in a tank."

That said, the Splurgoth are one of the more evocative elements. Along with the marvelous phrase "Glitter Boy." Oh man I like that term.

Parkinson's image would fit right in the first Doom! I'm definitely gonna look into this!

I loved the art in Rifts...and out of respect for Zak, I'll shut up now.

I have some love for the Rifts setting as well, despite its inanities. It has the strength of its convictions, I think.

I love Rifts (as a concept anyway) This was the first game i ever played, and i gotta agree with Zak, it's all because of the art. Specifically that full colour cover above. And that dragon dreadnaught, many hours have my friends and i sat around trying to figure out, with little success i might add, just how that thing is supposed to work. So many terms from rifts have stuck with me, their names so perfect their very words have a power over me. Brodkil, Splugorth, Bottweiler, none of which seem to be in my spell check by the way. Amazing simply amazing

Rifts taught me the importance of not shooting missiles at the other PCs when they decide to kill babies out of boredom if you're only 30' apart...

Love Rifts. In fact, our group shifted away from D&D and converted our characters to Palladium Fantasy even. I know a lot of folks whine about the mechanics, but let's be honest - D20 degenerates into nothing but a glorified board game once combat ensues. Palladium may be more complex, but at least it adds realism and allows for more creativity (IMHO).

I also love how in Palladium, I could create a Wizard who's also a great swordsman, or a Warrior who can pick locks. It's much better for character customization. Magic is handled much better in Palladium systems as well (more like the pulp novels or movies; none of this you can remember x lvl1 and y lvl2 and z lvl3 spells per day bullshit).

In the end though, all systems have their strong and weak points. There's no such thing as the "perfect" RPG system.

Eh, I learned to play largely on a diet of Palladium Robotech and yes, Teenage Mutant Ninja Turtles. And while I did often have... issues... with the rules, I'm now much much older and having "issues" with D20. In the end, it's all drag.

I wish I could comment more positively, since this is a very well written post and I'll agree that some of the art of Rifts was amazing but the setting and mechanics are a gawd aweful mess IMO.

The problem I have with Rifts (or one of them) is that the art invokes a pulpy, sci-fi setting at times but the writing describes a world I can not comprehend easily.

Rifts somehow 'looks' like Burroughs and Lovecraft teaming up with an anime studio to produce a GOR series but reads like the worst of the nineties Image and Wildstorm comics.

Heh. I remember playing the Rifts setting with Rolemaster/Spacemaster rules and having a wahoo good time doing it.

I'm not sure I'm...committed enough to do that again though.

We use to play alot of RIFTS.

The thing was we house ruled alot of stuff. The ideas were amazing but we had to house rule to make it work for us. I think that can be said for any game. Change what works for you.

I used to have a real special relationship with the ladies on the cover of the Rifts rulebook back in junior high school.

So, Zak...
You're obviously familiar with tons upon tons of game systems, and as it had been written in the abovementioned post, "You take whatever system, you house-rule the fuck out of it, and that's that".
So why D&D? Is it the "providing a little bit of everything" moment, or something else that makes it special? Or is it just because you like D&D and don't really care why it's so likable?
Just curious.

Also, I had a chance to play in a game with Kevin. He handled a table of 15 players like it was second nature....even with multiple party splits and alignments (good, evil, and selfish), and, like most of us, he doesn't rules-lawyer it when he's gming. He just goes with it.

The other idea is to created a scaled damage system like Star Wars d6..personal-cyborg-mecha-fighter scale. I'm woorking on that one...