And Who Is This? 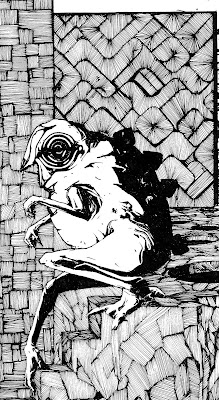 Something about it looks more like a creepy mood monster than a thing-you-have-to-fight monster to me. I can just imagine colonies of these fist-sized creatures living in the walls and screaming weird amphibious/birdlike songs at adventurers as they pass by, maybe alerting other monsters to their presence or trying to steal glittering objects from the party as they sleep.

Really, that's a face that you really want to hate, but somehow just can't. Their role in the dungeon should be similar, where they do something unwittingly antagonistic to the party but are somehow cheerful and helpless enough that the party would feel bad about outright murdering them.

is it just a regular kfc chicken in it's natural habitat?

An object lesson for those who would steal from an especially cruel lich.

Imagine going through a dungeon and coming upon a room not guarded by any beast. It is a simple room filled simply with holes. The stair that lead up to it are not manmy, and the holes could be filled with treasure...

The room is cursed. Anyone who glances down the holes too long becomes obsessed with the holes. They long to see what is in each one, and will drive away or kill any who get in their way. Anyone who stays in this room will not leave the dungeon.

Foul magics taint the obssessed one and he becomes the beast seen above. His eyes grow large and bulbous, better to see through the darkness, to the treasures that lie in the holes. But the blubber that encases it or the arms that flail weakly in front of them cannot help them reach down. So they sit on the stairs to cojole, threaten, and beg the next treasure hunter to help them reach whatever lies at the bottom of the holes.

Usually the poor bastard above is slain, but there is always someone who will look down the hole and become obssessed...

Years ago, a foul curse was placed upon the land. All the inhabitants became slimy, reptilian things who fled from the light. The great knights became fearsome monsters who guard the depths. This? This is a bureaucrat.

The coolest rendition of a Deep One ever.

Zak, one art-person to another: Can I ask how you keep from getting crippling carpal-tunnel syndrome or the like, doing all that line-work? Just looking at that tiled background makes pain shoot up my arms.

With one eye and a weak body, I'd say it's a Nothic, a type of Abberation. From the holes, I suppose this one is from Blackburn, Lancashire.

It looks like a newly-spawned Blibbit. The tiny but sharp teeth and gaping mouth signify its unslakable hunger, and you can see the spawning pits behind him. Blibbits are made when evil sorcerers place normal tadpoles in small pits filled with human blood. They grow quickly and transform first into the bloated stegosaur dude above, then slowly grow to be full-sized Toad demons, which look like warty, potbellied trolls. I think Kenzer & Co made the adult toad demon, back when they made figures for Hackmaster.

The foul offspring of a stegosaurus and a stereo system.

When you draw, do you move your wrist or your arm more?

It just emerged from the three-hole latrine you see there. It burrows into the filth under them and waits for victims, upon whom it can then perform unspeakable acts. This one is in search of a better-trafficked home. That is why it is so clean.

As for its name: some call it a Pit Toilet Fiend. Others call it The Thing In The Cesspool. But most people know it only as "What? AAAAARGH!"

This is a prime example of an archeleon, a peculiar type of reptile that can change not its color, but its magical aura. Thus it will react randomly to detect magic spells cast by clerics or magic users, true seeing or detect alignment effects, and possible more advanced forms of divination and examination, including seeing into other planes. Unlike chameleons, they do not attempt to blend in with the magic environment around them but change their aura according to a method unplumbed by the humanoid mind. The feed on small insects, and are largely harmless to humans.

I'll be honest, these threads are the reason I read this blog.

It is spoken of as a cursed creature, that much is known. But for every individual of its...race? type? genus, maybe?, there are subtle changes it shares with some and not others, leading most locals to believe that collectively they are those who have crossed powerful magics or magical beings. They are known only as The Absent, because they can remember everything but their own pasts. Simply put, they have no true personalities in our own sense, only instinct. Their personal memories allow them to speak any language, which makes nailing down their origins near-impossible. Any event directing affecting them is forgotten, but anything they merely observe is remembered almost photographically. They lack the ability to be violent, for they would recall no reason to be shortly after the provocation. They have no names, and their manners are very physical (so as to denote who they specifically are talking to). They can be helpful or useless depending on the questions you ask, but they'll never lead you wrong.

It appears to be my milkman. But he's wearing the hat of my wife.

This may explain the 'genetic defects' in the last of my brood.

You will pardon me while I go unlock the weapons locker I trust?

This is one of the most feared Demonlords, Uxarksic, the Mindshatterer. Even though he seems to be no more than a lesser demon, he has unsurpassed PSI - abilities, and is followed almost everywhere by his retinue of greater demons. He is renowned for the two pit devils he has dominated and imprisoned in his maze like castle on the 101 layer of the Abyss, and one of his greatest pleasures is to make them do chaotic things, while reading their thoughts, their controlled minds crying out in rage and frustration.

hüth: Well, I try to use my large-muscle groups as much as I can, but that's tricky for fine detail, especially if you've got the shakes for any reason.

It looks like a servant of Baalzebul, if you ask me. Maybe the equivalent of his court jester.

If I met that in an incomplete house, partly constructed and abandoned in a partly constructed and abandoned suburb, surrounded by drywall and insulation and plastic tarps and beetles and bird droppings and rusted construction tools, I would expect it to pose riddles to me; and the riddles could only be answered if you knew the story of what happened in that incomplete neighborhood so many years ago.

These things obviously climb through bedroom windows in the middle of the night and swallow people up whole. They totter into the night on their thin, stilt-like legs, their rubbery bodies writhing with their still-conscious victim. Then they skitter down pitch-black dungeon stairs to find a dark corner to digest their precious catch.

A hybrid between human and an Outer God servant. Just need a flute for playing tunes to Azathoth.