The Thog or, Chiron Crawler 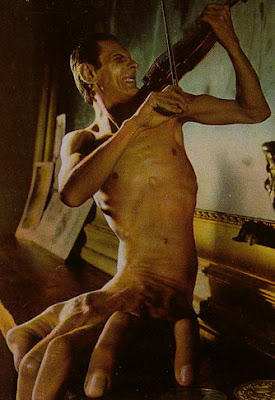 None know the true origin of the thogs (or digitaurs, or Chiron Crawlers, or, simply, 'crawlers') but sages feel it is safe to assume it involved sorcery, lunacy, and strong drink. They have the head, arms, and upper torso of ordinary men, while their lower bodies are shaped like gigantic human hands.

There are two major subraces, known as "tall" and "long" in the common tongue.

Tall thogs (with the fingers emerging forward from the torso--as in the photo) are generally given to intellectual pursuits, including bureauracy, politics and magic. These fearsome hybrids are often found in the employ of sea hags, misanthropic alchemists, and power-mad magi, though some have been known to betray their masters in order to pillage eldritch secrets from their libraries and laboratories.

Long thogs (with the thumb characteristically emerging from the front of the torso and the fingers facing backward, as in the sketch below) are fierce warriors. In the gladiatorial pits of Cors-Edeth and lower Vornheim thogs are pitted against driders and centaurs, and few who wager on the misshapen abominations are disappointed. 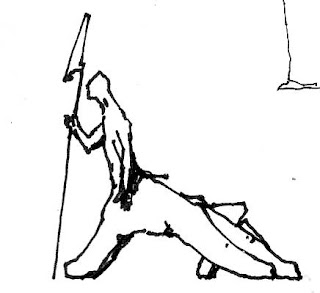 Their weapon of choice is the poleaxe, with which they strike ordinary foes from above.

Although they make excellent guards, "right" crawlers will only allow themselves to be partnered with "left" crawlers, and vice versa.

In wilderness areas, both subspecies have been observed to grow their leg-nails long and use them to scratch or claw as they move toward opponents, though this tactic is impractical in urban areas or stone-floored dungeons.

While few play the violin, the one in the photo does.

Basically, thogs should be totally scalable--i.e. about as scary as you need them to be the first time the PCs meet them. Long-nailed thogs get one extra "scratch" attack per opponent (up to a maximum of 5, obviously). Their move stat should be faster than ordinary humans but lower than that of a true centaur. They're a good monster if you're in the mood for hit-location charts.

If you really want to go nuts, you can give magic-using tall thogs a slew of unusual or especially deadly spells activated by the gestures and movements of their lower body, or by a mated pair of thogs moving around in unison.

_____________
Image and, in all likelihood, entire concept, taken from the cover to the Gray Matter album "Thog" from Dischord records.

These are either brilliant, disgusting, or both. I'd pair them with some severed giant's heads, walking upside down with their legs for hair-- maybe make the PCs present for the severing of Ymir or something?

Indeed! One creature I created but haven't used in ages was a massive foot roughly the size of a Lincoln Town Car. It was inspired by Monty Python. A see a whole dungeon of these sorts of things being put together by the Black Knight from Holy Grail.

Very cool. This is nearly identical to a lesser demon I created a while back. Only major difference is it has a giant mouth for a face ( such as this)

Nice. It reminds me of the sort of thing that comes out of the writers of the so-called New Weird movement.

It's about time that sort of aesthetic started to make its way into gaming.

Dang, there has to be a joke here about rude hand gestures or,"the finger", but I just can't get a grip on it.

That thing scared the shit out of me.