Books (the Other Kind) 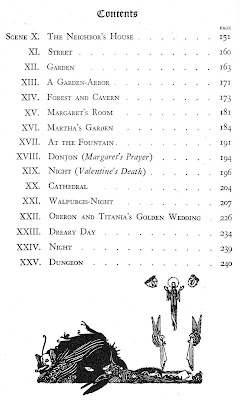 Some D&D Bloggers have that little "currently reading" box in the corner. It usually has a fantasy or sci-fi novel in it, or occasionally some non-fiction. This surprises me a little, because genre novels form a very small part of my own diet. I like Jack Vance and M. John Harrison and J.G. Ballard and Philip K. Dick. I like some of Elric, some of Fritz Leiber, and some of Lovecraft--and that's about it.

I like crazy prose, fancy prose, and experimental prose, and those guys all qualify. But if I had one of those boxes in the corner of this blog it would almost never have a fantasy or sci-fi novel in it.

I notice that a lot of my best D&D ideas come from utterly literary-establishment-respectable books, though.

I got a monster idea from Yeats:

"The Horses of Disaster plunge in the heavy clay."

(Lovecraft got one from Tennyson.)

The table of contents for Baudelaire's Fleurs Du Mal might as well be called "Random Monster Idea/Adventure Seed Chart" and Shelley wrote about all the political information I need to know about my campaign world:
An old, mad, blind, despised, and dying king,--
Princes, the dregs of their dull race, who
Through public scorn,--mud from a muddy spring,--
Rulers who neither see, nor feel, nor know,
But leech-like to their fainting country cling,
Till they drop, blind in blood, without a blow,--
A people starved and stabbed in the untilled field
Here's an eminently RPG-able bit from Donald Barthelme's short story "Report":

"We could, of course, release thousands upon thousands of self-powered crawling-along-the-ground lengths of titanium wire eighteen inches long with a diameter of .0005 centimeters (that is to say, invisible) which, scenting an enemy, climb up his trouser leg and wrap themselves around his neck. We have developed those. They are within our capabilities. We could, of course, release in the arena of the upper air our new improved pufferfish toxin which precipitates an identity crisis. No special technical problems there. That is almost laughably easy. We could, of course, place up to two million maggots in their rice within twenty-four hours. The maggots are ready, massed in secret staging areas in Alabama. We have hypdermic darts capable of piebalding the enemy's pigmentation. We have rots, blights, and rusts capable of attacking his alphabet. Those are dandies. We have a hut-shrinking chemical which penetrates the fibers of the bamboo, causing it, the hut, to strangle its occupants. This operates only after 10 P.M., when people are sleeping. Their mathematics are at the mercy of a suppurating surd we have invented. We have a family of fishes trained to attack their fishes. We have the deadly testicle-destroying telegram. The cable companies are cooperating. We have a green substance that, well, I'd rather not talk about. We have a secret word that, if pronounced, produces multiple fractures in all living things in an area the size of four football fields."

And this Borges passage feels to me exactly the way I felt when I was a kid and first read about how the the name 'Vecna' was once spoken only in whispers:

On Exactitude in Science

In that Empire, the Art of Cartography attained such Perfection that the map of a single Province occupied the entirety of a City, and the map of the Empire, the entirety of a Province. In time, those Unconscionable Maps no longer satisfied, and the Cartographers Guilds struck a Map of the Empire whose size was that of the Empire, and which coincided point for point with it. The following Generations, who were not so fond of the Study of Cartography as their Forebears had been, saw that that vast Map was Useless, and not without some Pitilessness was it, that they delivered it up to the Inclemencies of Sun and Winters. In the Deserts of the West, still today, there are Tattered Ruins of that Map, inhabited by Animals and Beggars; in all the Land there is no other Relic of the Disciplines of Geography.

However, feel free to remind me about all the excellent pulp novels I should be reading--James Mal does it all the time.

_________
Top illustration is from Faust from the Cameo Classics Edition illustrated by Harry Clarke that Mandy just got me for Christmas.

I'd bet that gamers are very well read. Perhaps they tend to talk about sci-fi and fantasy books on their blogs because they want to keep the content focused.

I agree with you that other kinds of literature can be very inspirational.

I've been a bookseller for just shy of fifteen years now, and in that time I have read just about everything there is (I was also an English Lit. major in college, for whatever that's worth - certainly not money); and, although I love Borges and Yeats, a great gaming idea can come from anywhere - MAD magazine, an episode of Futurama, a pattern in the wallpaper, your blog, etc. The most important thing, in my experience, is that people have their own taste. I don't care if you like Shelley or Leiber or whatever - as long as YOU REALLY LIKE IT. Most of the people who come into my store buy something Oprah or the Times Literary Supplement or the last Tom Hanks movie told them to buy. They're not really readers; they don't really have their own tastes; and I rarely see them again. And that's fine - maybe they like bowling or have some other hobby. So (sorry for the long winded rant) ... if you want to be inspired, read whatever the hell you WANT to read.

I totally agree with your line of thinking.

Its funny but I just put a comment on a post by another game blogger just the other day where I basically said that I get my best gaming ideas from none game sources. I am as likely to get inspiration for a new alien species by reading Dr. Seuss or Portuguese folklore as I am a science book discussing prehistoric mammals.

But then you are an artiste unlike the rest of us.

OTOH, I have seriously considered writing Jorge Luis Borges the RPG in my less sane moments.

Dr. Seuss is chock full of great RPG inspiration. Has anyone compiled a bestiary of all the crazy Seuss creations and statted them up for D&D? It should be done.

I am a big Dr. Seuss fan and have used numerous Seussian beasts and plot adaptions throughout the years. Here's one...

The village idiot/town drunk/a young orphan boy believes he hear's voices coming from a dandelion. The voices tell him things that include predications of the near future, ways to save crops from drought and the like. When asked who is talking to he merely says "Who. "I listen when Who is talking."

Enter evil land baron/wizard/priest/what-have-you who wants this magic knowledge for himself/believes it'll give him power/is a blasphemy against the gods/etc.

Inspired of course by 'Horton Hear's a Who' I've run this scenario in different variants for D&D, Ars Magica and Star Trek.

If you like Borges, & want a real treat, read Gene Wolfe, especially his Book of the New Sun (currently published as "Shadow & Claw" & "Sword & Citidal")

Clark Ashton Smith! One of the most overlooked pulp writers nowadays, he was one of the "big three" with REH and Lovecraft. Grab a copy of Zothique if you can, or check out the Eldritch Dark website (www.eldritchdark.com)

What can I say: I love Terry Pratchett and Douglas Adams. More people should take silly seriously. Its healthy.

But if I'm after real inspiration for intrigue and characters, then Machado de Assis is the go-guy for me.