As some of you might know, I have a longstanding interest in researching how Nazis dealt with art and culture and how they used the theory of "Degenerate Art" to lock up artists and destroy their work.

I asked my dad a long time ago about this--I asked him if anyone in the family knew anything about that, from the war.

He said he'd ask around, maybe, then said "You know about the Vilnius story right?"

"Well, when the family was in Lithuania and the SS came, they were hiding in a false basement or something..."

"And they could hear them upstairs knock down the door and walk around. And down in the basement the baby was crying...so they had to keep their hands over the baby's mouth--and..."

That's my family. That's the kind of stories I grew up with.

So imagine my surprise when me, the Jew, and my (three queer and one genderfluid, hard-lefty) players finished playing D&D last night... 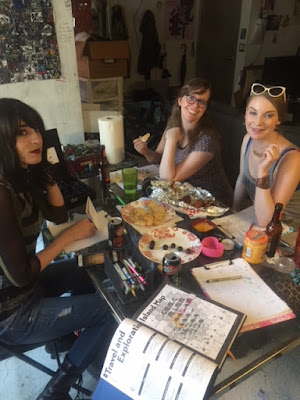 ...and found an article by a guy who writes teenage vampire erotica with a cartoon dog avatar was calling me a gamergater and a Nazi.

Ok, fine, you guys have been on the internet, this is not a surprise: since 2004, probably every one reading this has been called a Nazi by a some dude who writes teenage vampire erotica with a cartoon dog avatar.

But then imagine my somewhat more genuine surprise when I saw that a grown-up man with a job as a game designer was promoting it, as if it was a real thing:

Rob Donoghue is co-founder of Evil Hat, who makes Fate. He affects a feckless bearded dad pose. Who me? I am just a harmless smiling gamefellow!

After sharing the cartoon dog's hatespeech, he then started a very pious thread ...

Why is a man in charge of one of the biggest indie RPG publishers throwing in with this shit?

Could it possibly be that the work I write this year got nominated for more awards than any other RPG book this season and not only did Evil Hat get nominated for almost nothing it gets recognized less and less each year? Or that the head writer on Vampire was likewise showered in nominations while Evil Hat's star sinks lower and lower?

I get it, Rob. You never swear and never talk about sex and you look like a bearded dad while we look like ...what we look like, but this is so far past the line of any human decency I can't even imagine what was in your head.

There no way you can possibly see yourself as a good person after this.

You're a person. I'm a person. We make games for fuck's sake.

This is beyond anything--if you can't even slow down whatever is going on in your head long enough to see the wall of red lights you just ran through... 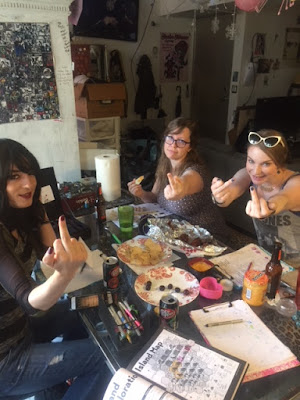 ps due to the uptick in harassment we may be hiring some security for the Gencon booth, if you've got any suggestions, go here. 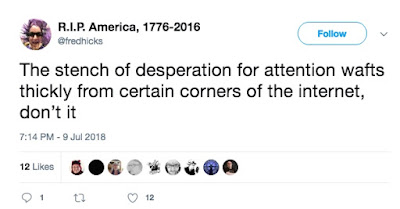 On July 11, they were prevailed upon to admit their shittiness:

The people you're resisting will never approve your form of resistance.

How many (and which, if any) of the people who've ever lied about you in public or signal-boosted someone else doing it have actually come forward and apologized?

Never stop fighting, bro. That they can still maintain this rubber glue kiddie shit is mystifying. Culty creepy shit, little enclaves of homgeny. Like i don't even really want friends that are just little mirrors, shooting my own bullshit back at me, i want to be challenged. Just can't see any upside to samey-safey sycophantic "friendship". Its like jinks, pinch, poke, you owe me a coke but you can drink enough of that stuff to rot your teeth and the teeth are somebodies mind. Was it the rollins band that did that liar song? Its like this comment but better.

It's hard to remember all of them. Not many big names. Usually just fans and small designers who go "Oh fuck, sorry" after someone else calls them out

You wouldn't BELIEVE how many of them blame their divorce for some reason. "Sorry i just had a big divorce so I decided to help libel you" is a weird take but its a thing

A few of your more notorious hsters had started referring to you as bad hair man. I'm pretty sure at least. PM me if you want info

Hardly a scoop, it's Ettin, mostly. over on his twitter account: @ettin64, which everyone should be reporting for harassment

but if there's some level of deviousness beyond that I should be aware of, email me: zakzsmith & hawtmayle

I'm glad that some people are able to recognize their wrongs.

THIS one is exceptionally fucking gross though and idk how it's going to be even approached. Maybe people should consider keeping their fucking mouths shut sometimes.

"People in my family were baked in ovens"
That's terrible tragic! Could you tell how you found about this?

How you family find out?

Records discovered after the liberation iirc

Were they in death camp? Did really the records the show why they were burned in ovens?
Excuse my shitted english, I am brazil.

Is this a new conflict, or is it linked to the stuff you've previously blogged about?

I know libel is harder to prove in the US, but maybe you could get a lawyer to send them a cease and desist letter at least.

@anarchist
It is linked to previous stuff. And legal threats are pointless against people who have no money.

Maybe you could go after their ISP instead of them?

Amaze! But so very sad. Why where they burned in creamtoria iirc?

the sharing was done on twitter. if you have some more ideas about how to go about this than i do email me, you got my address

Here is a link you might find enlightening as to the whys and hows of the holocaust and what millions of Jews, Romani, Homosexuals and others had to endure at the hands of the Nazis.

Also, books like Raul Hilberg's "The Destruction of the European Jews" was a groundbreaking historical analysis.

The historical specifics in those and many other sources illustrate why Rob Donoghue's crap is not only insulting and harassing to Zak, but also to anyone who's family was on the receiving end of National Socialism's agendas.

It's also why the term 'Nazi' shouldn't be bandied about hyperbolically... it demeans what the real historical Nazi's did and what their victims suffered.

Hi, and thanks from Brazil! My friend help me read little. Why 4 million die and then 1 million die -at-auschwitz-birkenau?
Also, why have not the bodies been redug?

idk is I don't know inst it?
If yes, my friend dosent know either. Its a mistery.