"I love Latin American literature and Russian literature. It never occurred to me that Dostoyevsky was supposed to explain something to me. [Audience chuckles] He’s talking to other Russians about very specific things. But it says something very important to me, and was an enormous education for me."
-Toni Morrison
I can't remember what bismuth is, but I remember this litany from school:
Did you write on the assigned topic?
Did you write for the assigned audience?
There were more and they were stupid, too--these were all gimmes in the standardized writing tests they terrorized and still terrorize American schools with. Go "Dear Grandma, I am writing to tell you about the Slavs…" and you've checked those two off.
The problem with these checklist writing tests is they make writing well seem less like thinking well than it really is.
I want to look at this word "audience".
"Who's your audience?" They say.
"Anyone who gets something out of it" is the instinctive answer--and if we're talking about something for sale it's probably true enough.
"Myself" people say sometimes--which is usually true, until you start explaining something. Like if the audience for this blog entry was just me, I wouldn't bother to attribute that quote to Toni Morrison since I already know she said it. Nobody would ever write anything that started "How To…" if the author was the intended audience. When you truly write for yourself alone, you only write things you're scared you'll forget, or need to write down in order to sort out.
Neither of those answers answers addresses "Audience" in the sense Morrison is talking about in her quote. In that sense, it means:
What are the things you assume your readers already know about and care about before they start reading (or playing)?
What kind of people already know about those things or care about them?
Dostoyevsky wrote things certain Russians could be expected to know about. He let everybody else play catch up and read the footnotes, including Toni Morrison. And she--being a writer--knows why you would do that. (If you don't, here's the rest of what she said. It's an autodownload.)
So while I could say the audience for Vornheim is "Anybody who can get anything out of it" the audience I'm sharing assumptions with is: "People already playing D&D-like RPGs who are-, or would like to be-, comfortable creating original content for their game".
Anxieties that were essentially audience-based have been around as long as there have been RPGs. Right there in the first OD&D book (called "Men & Magic"--audience-baitingly enough) tells you what elf stats are like without telling you what an elf even is first. Assumptions were made.
I go to the trouble to point out what may seem obvious because I think most everything controversial in RPGs is clearer if we look at these things through the lens of disagreements about who the assumed audience for a piece of game writing or game behavior is. People use the word "context"--and use it poorly and vaguely--when maybe they should be saying "audience".
You create content for your players. (And they create it for each other.) That's your audience.
You put that same content on a blog, that's a bigger, but maybe non-overlapping audience.
You put it in a book and sell it, that's a probably-overlapping maybe-bigger maybe-smaller audience.
Then you get that same content discussed as a possible ambassador for the hobby to new initiates on a mass level and that's a whole other audience.
…and I think that a big problem is people have a tendency to talk about those audiences as if they're all the same and all need to be told the same things. They all need to be told the truth, but they don't need to hear the same bits of the truth emphasized. Even with everything internettable, not everything you do needs to represent everything that can be done all the time.
For instance: The fact that girls can play games just like boys can is unequivocally true.
12-year-olds need to be told that. These ladies… 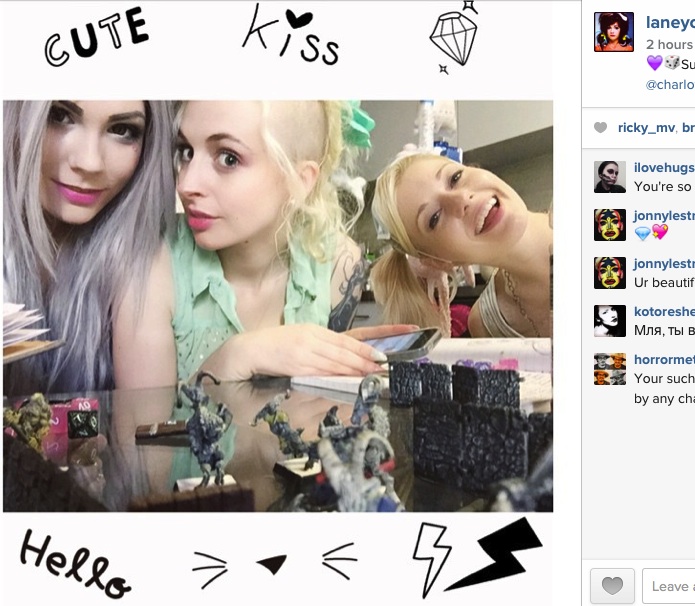 But I'm not really advocating for a position as much as trying to change the way we talk about the positions we take. I don't have any bigger point than: I'd like to see people think about audience a little harder, and talk about different audiences a little more.
Maybe I haven't said very much--but I hope it's the beginning of a conversation.
-
-

I'm still thinking it through, but there is a strong impression that language (in a broad sense) and shared concerns are a key part of the idea of audience. Tuning those aspects would be important to addressing the intended audience.

It occurs to me that I don't know my current audience as well as I'd like. Also, as well as I need to.

When pitching games to my group of the last three years, I tend to get a mix of cheers, polite nods, and blank stares. This is because I am pitching to one audience (my previous groups), but addressing another entirely.

This presents a problem, since not only am I unsure of what they're looking for, but I'm honestly don't know if I can provide it. I can provide what interests me, and I have to hope that something that does interests them as well.

We are trying a new thing where they tell me what they'd like to play, and I build something I like around that. We'll see how it goes.

Who then is the audience? Me, or my group?

@BA: Audience is to me the group you are addressing when information goes (mostly) in one direction; from you to the audience (articles, books, movies, and also blogs).
It seems that in your gaming experience you feel that you have to provide and thus you are talking about an audience. I believe that DM-ing should be done together with the players. Not in the sense that the players should give backgrounds and describe home countries that you can then implement in your campaign, but see what they pick when you offer them a choice, and what encounters/descriptions give the most enthusiastic responses etc. Try to read your players and use that as a guide to create your campaign to the satisfaction of both.

Zak, concerning the posts that end up in some form in your books, do you target the same audience for both?

I have no idea what you're talking about or if it has anything to do with what I wrote.

Not exactly. It is alot of the same people, but I usually assume the book audience has less common knowledge of ideas that I talk about on the blog.
If someone's confused on the blog, there's often a link or a place to ask. If they're confused int he book, then they're just confused.

@Zak - By 'Whose' I am assuming you mean which group (correct me if I'm wrong). The answer would be my older groups, both my New Jersey gang and my older New York ones.

This is largely because of age (most of my old players were my age or older. In my current group everyone is younger than me.), and I exposure (knowing the same pop culture references).