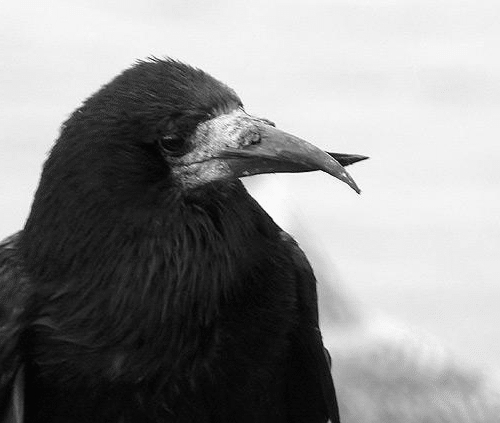 If a Cannibal Bird is fated to appear and quick motivation is needed, a d20 may be thrown to determine what exactly the creature thinks it's up to:
Four of these imperious beings, the most coherent pieces of the Cannibal Wind to coalesce from her corpse after its dispersal, are known. Each with obvious vanity claims to be a singular and unique entity, though there are reports of the same bird appearing in multiple places at once or successively at great distance.

All Cannibal Birds inflict Soul Loss on a damage roll of 6 and may summon freezing winds as a Superhero of the Dance of the Cannibal Wind. Each may also vary its size, often appearing quite small, or take on human form. Occasionally they appear in disturbing intermediate states, as if they cannot quite recall what separates man from bird. Human forms always receive the bonuses of cannibal frenzy without any associated restriction on behavior or appearance. Each cannibal bird has been slain several times, though they always reappear. Nothing known can slay them permanently.

Their names and shapes are:

Łətiʔən (Poison Hummingbird) the Skin-Stripper, who appears as:
• a thick-beaked hummingbird the size of a large dog, its face smeared with gore, or
• a small child crying and covered with what appears to be blood but is in fact a corrosive resin.
[HD 6, AC 4(15), Bite d6 plus save or d6 poison, 1-3 acid damage on touch.]

Kəykəẃəqəs (Corpses Crow) the Eye-Plucker, who appears as:
• two wicked-looking crows nearly man-sized moving in oddly mirrored motions, or
• a pair of twin youths, one boy and one girl, who finish each other's sentences and are both compulsive liars.
[HD 8, AC 5(14), Bite d6, two bodies acting independently with a single Hit Point pool.]

Huqʷhuqʷ (Crane Cackle) the Skull-Cracker, who appears as:
• a monstrous crane, fully 12ft tall on its stilt legs, that thrusts its beak at foes from above seeking to split open skulls, or
• an uncannily tall, long-fingered man of meticulous aspect & grim humor who may be plied with brains, which he finds delectable.
[HD 8, AC 5(14), Bite d6+4 reach 10ft.]

Qəčanuł (Crooked Beak) the Flesh-Tearer, who appears as:
• an ogre-sized bird of glittering iridescence with fancifully twisted beak, rigid forms writhing under its flesh as if it had all the wrong bones & each jockeying for a position of prominence, its uncanny bite twisting and snapping in all directions at once, or
• a hunchbacked crone with snaggletoothed smile, feigning weakness despite terrible strength.
[HD 10, AC 3(16), Bite d6+2, attacks all targets in range each turn.]

Cannibal Birds are most commonly seen at sites of great carnage feasting on corpses, though they may also appear anywhere in the deep wilds pursuing enigmatic ends. Though not always hostile, they are extremely capricious, and unless other interests prevail reactions should be checked anew each turn of interaction. Encounters almost inevitably end with their hunger awakened, but clever mortals occasionally escape unharmed if they figure out what game the bird is at fast enough to play along.

Treasure: Those that play along and do not irritate the Cannibal Bird receive a gift when it departs. Roll d6:
1-3. Twigs, leaves, and assorted detritus. Seemingly useless. A thorough search may reveal 4d6gp in coins and salvageable goods hidden in the trash. Or not.
4-5. Pile of suspicious meats. Strangely delectable and sweet-smelling. Equivalent to 2d6 days rations. Infects any human eating it with an Untamed Wind, other creatures are sickened (-2 to all actions). Remains perfectly preserved for a month, then rots away in moments.


6. A random magic item. Appears old and ill-used, but functional. If a magic weapon is rolled, it is automatically intelligent and possessed of a murderous avian spirit, which seeks to desecrate flesh and tear down civilization.

-
If you're interested in some eminent D&Dable realworld history check this out. Did you know the Russians fought the Tlingit?

"
He later laments that when they do, his cannonballs keep bouncing off the Tlingit fort. It was a mystery to the Russians, but not to the Kiks.ádi. They had watched the way a cannonball’s direct hit shattered seasoned wood. For this reason, Shís’ghi Noow’s walls had been built of saplings whose green and pliant wood offered a certain amount of give. The timbers were also angled and braced to disperse shock down and away, redirecting balls into pits dug to catch them. Coming ashore after the battle, Lisiansky writes that he gathered at least 150 cannonballs from around the fort walls.
"
Vanessa Veselka (novelist and D&D player--she played a thief with us) tells the story here and if you want to read the rest it's 3.99$.

I'm thinking of using that chart for dragons in my game. ---A huge ancient red dragon swoops down in the clearing, and asks: "You- manlings... why am I here? I can't recall..."