In retrospect, it should have been obvious.
Oh dark oracle which type of D&D will rock the most?

Zak: So when was the last time you played?

Rockstar: The last time it was like the 90s in Florida. We were playing ironically.

Zak: And Manson was DMing?

Rockstar: What don't we have?

Zak: Well the girls are really into tieflings and elves…

Zak: Oh and there's Dragonborn which is kinda…

Rockstar: It's not so old school.

Zak: Yeah like some people think they're a little cheesy. They breath fire and shit.

Rockstar: I wanna be old school…hmmm… (much debate)…y'know what? I like this dragon guy, it's cool. Is that alright?

Zak: Hey I'm not here to get in the way of your dreams.

Zak: Ok, so then you pick your class…they're probably fairly familiar but there's some new ones…

Rockstar: Assume I remember nothing.

Rockstar: Can I be a witch, like a dragonwitch?

Zak: Well y'know 5th edition doesn't judge. Like in the old one it was like "Dwarf wizard--no way!" but now it's like you do whatever you want. In practice the way it works is you pick something like half-orc druid multiclass thief and then I like judge you for ten minutes and then you play it and you're cool and make it work and then it's fine and I stop judging you because you made it work.

Zak: Now you gotta pick a witch patron--this one is kind of like the Morgaine Le Fay Camelot-witch choice, this one is basically Satan, and the Great Old One is pretty much Cthulhu…

Rockstar: Cthulhu.
Zak: Now for stats you can roll 4 six-sided dice and pick the three highest or you can be hardcore and roll just roll three and you get what you get.

There were several messages in bottles in the fountain. One said:

To Whom It May Concern,
I have been captured by the Red Bishops! Free me and you will be rewarded!

Laney's ranger was able to use tracking to figure out the note had been written by a mouse.

And off they went.

They found the jailer's kitchen (manned by one Meister Heincz, cooking weaselflesh and mustardcake--grateful and confused to be rescued from a life of toil) and fought a few weird Red & Pleasant Land vampires.

Now the thing about these guys is unless you stake them, at 0 hp they just turn into a lizard or something, crawl off, turn into little invulnerable chess pieces and start regenerating until they come back.

Rockstar summoned some fire elementals to burn the kitchen down looking for one of the escaped chess vampires, which worked, but actually bumping one off was kind of a pain and I don't think Rockstar hit anything with his lightning breath all day. After about an hour they had all these invulnerable wooden widgets and no xp to show for it--plus Rockstar got level-drained.

Rockstar: "These fucking things…Can I order the chef to eat the chess pieces?"

Zak: "Hey you worship Cthulhu--you can tell him whatever you like. Whadda you got for intimidation?"

Zak: "He's terrified of this lightning-breathing lizardwitch that talks and just throws them into his mouth."

Mandy: "They're gonna explode out of his stomach and kill him!"

Rockstar also rolled all his spells randomly and brought donuts and sour-cream-and-cheese-ruffles.

Point is: Rockstar clearly understands how this game is played. 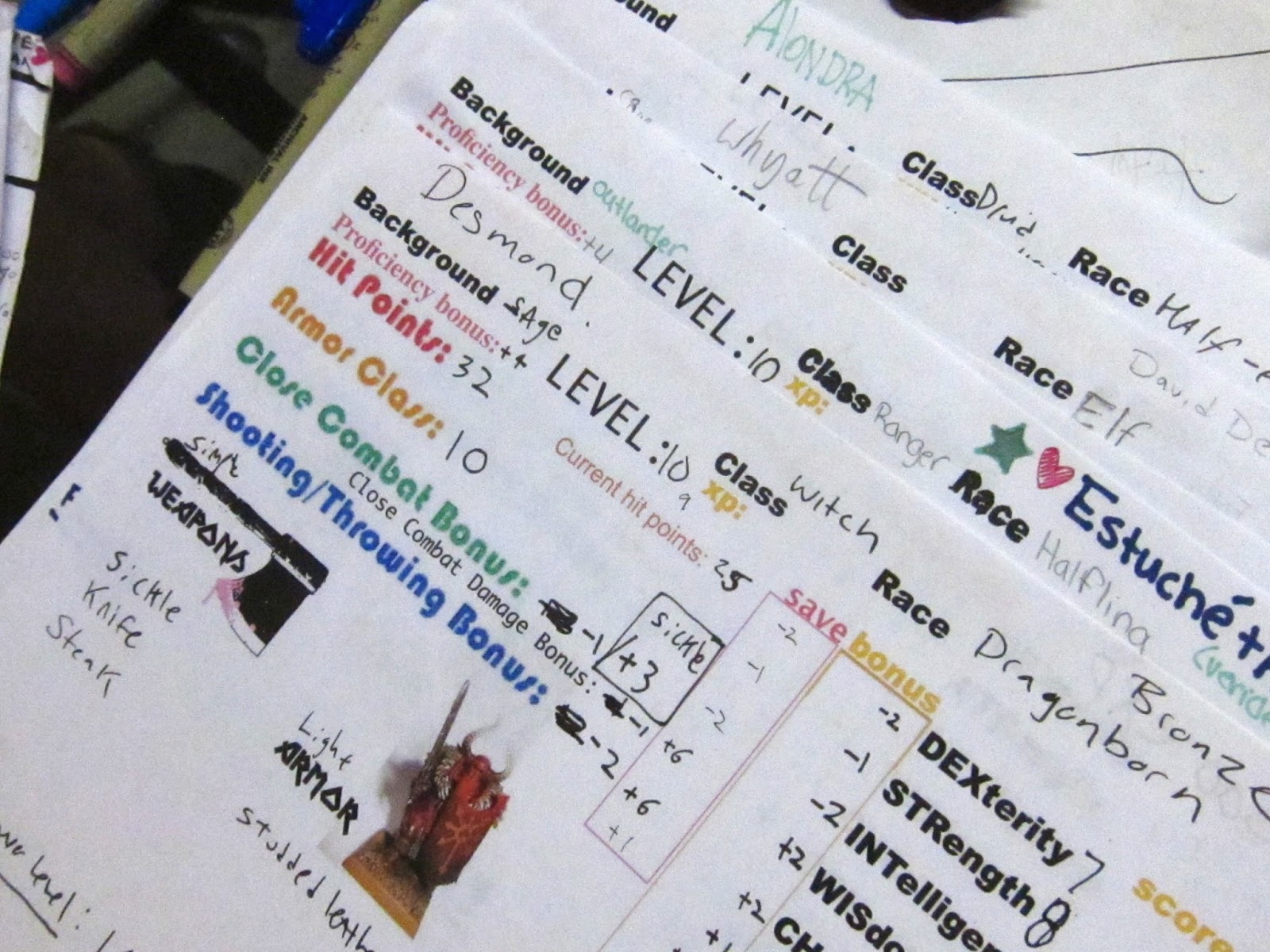 As For The New System….

As for the system:  After a bit of converting, 5e worked like a dream. Combat's fast, the character sheet is comprehensible, you're always rolling high but the numbers are relatively small and the fast-at-math people don't have to do everybody's math for them and there isn't that 3.5 thing where you're like "+6…is +6 good?".

The big test for us was whether Mandy liked it--since:

A) Mandy hates everything
and
B) Having a 17th level character, she was making the biggest transition. 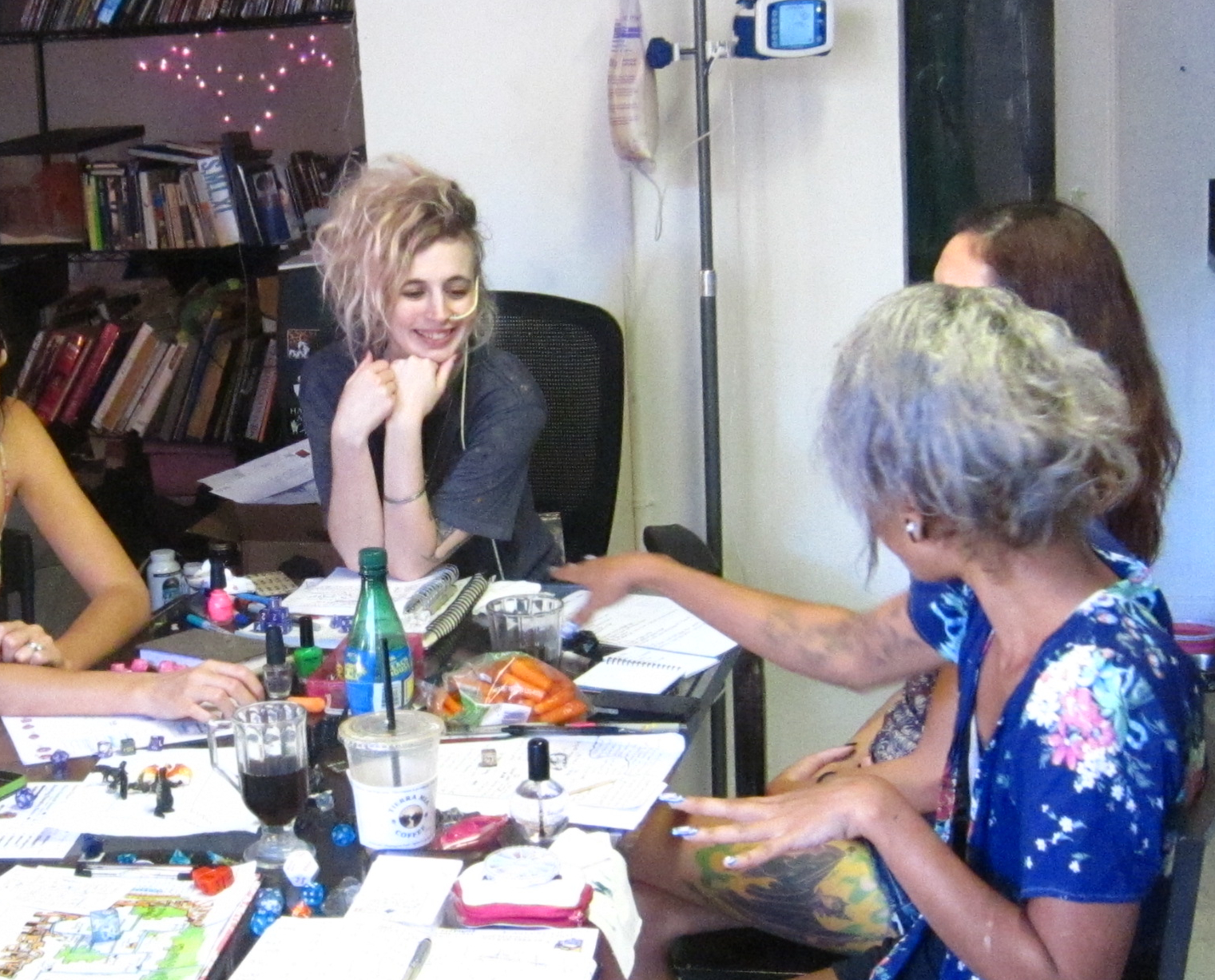 So far so good, though in the interest of having some time to play I short-handed a few spells. I'm gonna try to take a closer look at the magic classes and iron them out. Gotta make sure that Cthulhu-lizard-witch really feels like a Cthulhu lizard witch.

Also, in the second picture, he appears to be trying to snort Godzilla. Can't decide if that's daft or awesome.

Second picture of him, after all the demons, sorry.

I've wanted to hang out with Twiggy ever since I saw him thank Darth Vader in an award acceptance speech (can't remember the video... maybe Demystifying the Devil?). Knowing that he's willing to play D&D just makes me more jealous of your life, Mr. S. At least your blog lets me live vicariously through you.

Sounds like a great time. I'd be really interested to read about your hacks for this edition.

Our group has also been rockin 5e and lovin it. Now we will get a flood of Zak S 5e hacks. It's like Christmas in August!