"…and the goat had a notable horn between his eyes"

Animals are the most common monster in your setting.

Yes, your druid can talk to them, but what do they say? Oh I want to pull your sled, hippie? No.

Animals are political--flies hate toads and frogs and toads and frogs hate my Monday group, because they killed a Slaad, one of their gods, which in turn hates the Chasme, or demon-fly.

Point being there is, even before the new Monster Manual arrives, a great deal of nascent animontrosity nascent in your world. Dormant hates, waiting for a moment to bray and bite. Yes, your honey badger Animal Companion will help you, but if you tell it to kill snakes--it might not stop.

Which brings us to the goat. We imagine animals are us and imagine their inner world is the world we'd have had we that face. 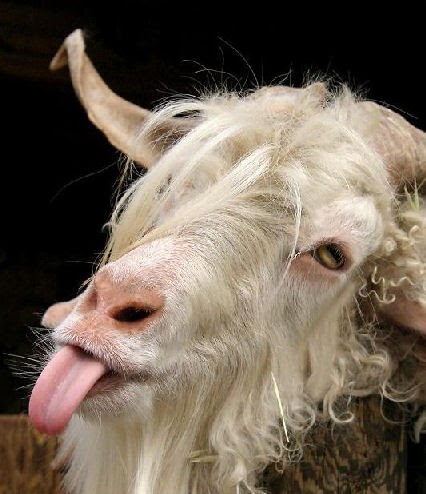 By and large, our ancestors seem to have looked at goats and seen a sharp-featured male face, whose beard made him old, whose hollowed cheeks spoke not of softeing age but of having been harrowed, shriven and shrivelled and whose side-slit half-open eyes made him sly and drunk.

We aren't complete idiots, though--and once dealt with domestic animals daily--so much of what we decide is based on what they actually do. So we can add in that this particular senior citizen is omnivorous, tenacious, and difficult.

At some point, most of Europe decided this was the worst kind of man you could be. He, like, the serpent, had been too far and taken in too much.
People say goats are lustful, serving Baphomet, a duke beneath Demogorgon, but then, people say a lot of things.

What is known for certain is that the goat is contemptuous of the sheep, which obeys, that two goats--Toothsnarler and Toothgrinder--draw the chariot of Thor, that they give milk, meat, cheese and hide, that sin may be invested in a special goat to purge a community of it, that they possess a two-breasted udder, that they whisper lewdness into the ears of saints, and that the Cathedrals of Tittivila used to be built inside the bodies of massive, 8-legged black goats.

While it is not true that goats may eat anything, they have been known to ruminate on a wide variety of topics. Those casting Speak With Animals and consulting a goat on any topic will likely be confronted with a well-developed (if not always well-conceived) treatment of the subject. 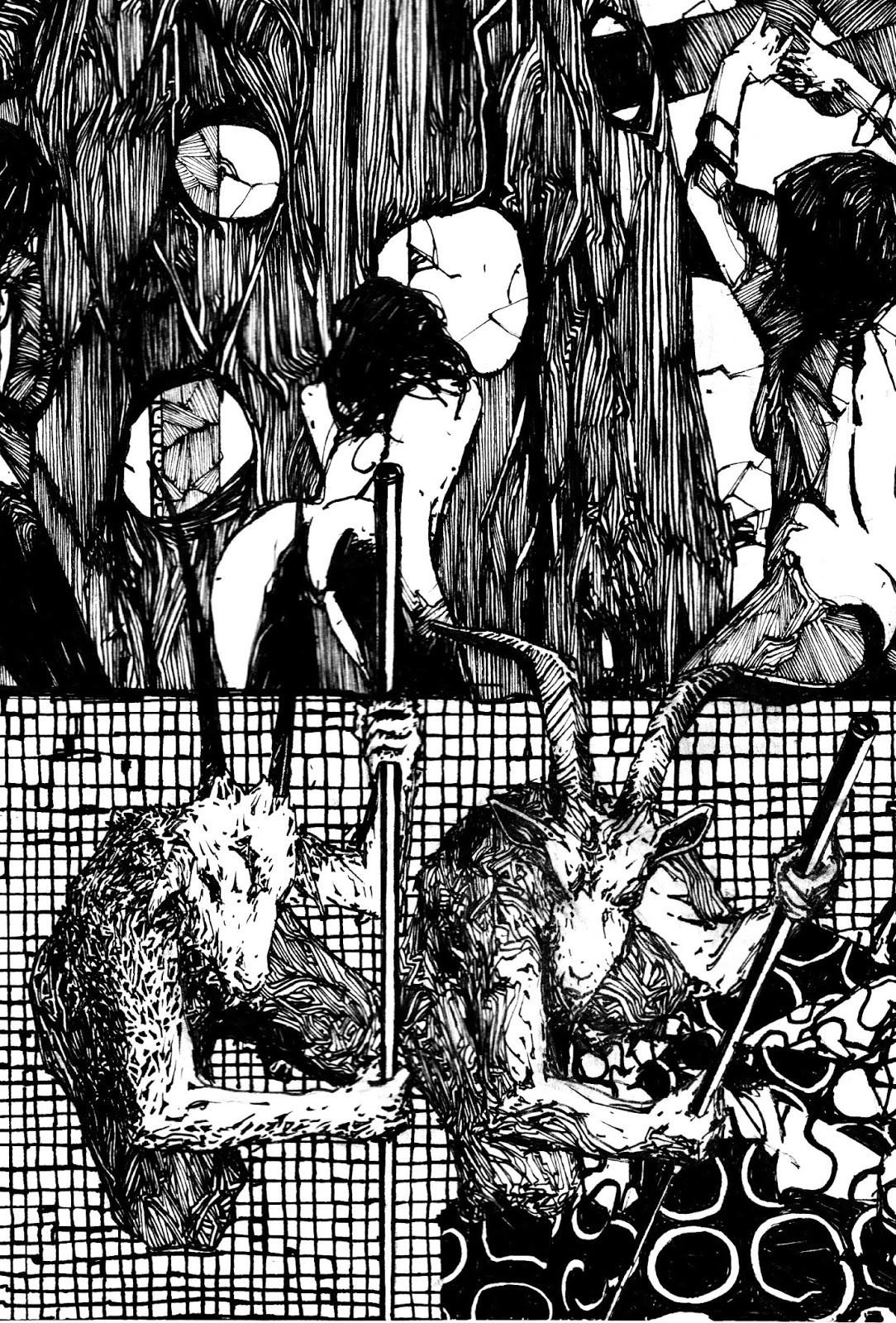 Beastmen are chosen of Demogorgon, and possess goat heads, but they lack the gimlet calm of their goat parents. It is said among goats that two-legged blood makes beastmen lustful.

War-goats have 2+2 hit dice and attack as wardogs, save they do +2 damage on a charge and are much harder to train. If you ask a wardog to fetch something it might work, your wargoat will probably eat it.

Halflings, dwarves and both tribal and witchwood goblins are known to ride wargoats, and it is claimed gnomes have a great affinity with them, but no-one gives a fuck because they're gnomes. 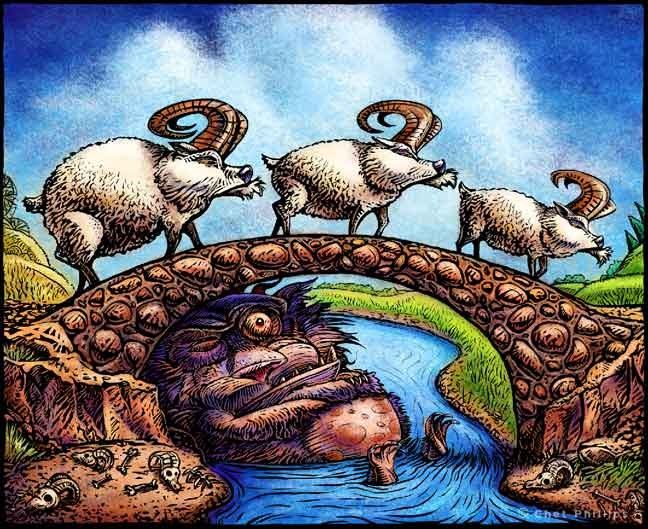 The goat's greatest foe is, of course, the troll. Trolls lurk beneath bridges, for they are places which connect, by civilized means, loci which Demogorgon--in his wisdom--preferred to conceive separately.

Typically, trolls will menace each goat that passes a bridge (to quote the Monster Manual) "unceasingly", until gored by an unusually large, pugnacious, skilled or lucky goat. Such a goat (known as an Escape Goat) then acquires the trolls' regeneration abilities. If, like Toothsnarler and Toothgrinder, they are slaughtered by their master and eaten in a goat's head soup, they will return healthy the next morning.

Another variety is the Night Goat, which is a kind of crime-solving goat. It has no special abilities, but murmurs in the darkness.

As the Icelandic Goat nears extinction, it requests your help.
-
-
-

In the RuneQuest game, broo (goat-headed beastmen) are the foulest and vilest opponents.

Not gonna lie, Zak. You post some cool shit but more often than not it's just too crazy for my taste. That goes for your gaming stuff and your art too - that's usually to... chaotic maybe? for my tastes.

That said, the "Beastmen" piece up there looks to be yours, and that, sir, is one bad ass piece of work. Me likey.

yeah the beastmen and frogs are mine

Who/what might goata hate? They disdain sheep (and likely all domestic animals - perhaps including other goats), but what beast drives them to raging goatish fury? The tiger for its ferocity, or do they dispise birds for thier freedom? Perhaps the inedible and poisonous beast is deemed baaaa d?

mind = blown
this changes how I perceive and run game world... while still jiving with all that has already happened. Thank you Smith!

Your first couple of paragraphs reminds me of the final scene in Caryl Churchill's play 'Far Away'. You should read it if you don't know it Zak, I think you'd like it.

Also I'm currently reading Trolls: An Unnatural History, an excellent folklore study by John Lindow. No mention of goats so far but it can only be a matter of time! Heading over for some goat-saving action now.

"Now I'm coming to gobble you up," roared the Troll.

"Well, come along! I've got two spears,
And I'll poke your eyeballs out your ears;
I've got besides two curling-stones,
And I'll crush you to bits, body and bones."

That was what the big billy-goat said; and that is what he did.

- I never heard this version as a child. Big billy-goat is pretty metal.

Goats are destructive, and will destroy or eat things in their environment. Meanwhile sheep are self-destructive and will try to strangle themselves on fences and tree forks, or drown themselves in rivers. The contempt that goats feel for sheep is nothing compared to the contempt sheep feel for themselves.

The alternative is that sheep are just dumb, but self-hatred is a more interesting explanation.

I've done a few 'monster listings' for real animals on my blog.

The only example of D&D doing this that I can think of is the 'bear hug'.

I love the "animal politics" idea.

all animals consider themselves pious, the goat very consciously so. the central virtue of the goats piety is obstinance. the troll-slaying hero-goat is at the pinnacle of obstinance as it throws down it's ancestral oppressor.
paradoxically, all saint-goats and martyr-goats come from this pool of hero-goats. they are martyrs to obedience. obedience, normally the greatest sin of goat is here canonized out of recognition that the heroes have absorbed all latent, ambient goat obedience so that goat-kind can remain pure in a sort of lent/mardi gras dynamic. a catholic/vodoo sort of dynamic.

Ever known a goat?

They're like the guy who comes to your party eats all the food, drinks all the drink and then breaks stuff with deliberate glee. The difference between him and the Ram is that he does it for fun and he's bright enough to check the salad crisper for the good stuff.

The goat's reputation comes from the fact you always expect the goat knew exactly what he was doing when he knocked you in the balls. Chickens, sheep, and cattle are stupid. The goat, he's up to something.