You know what's a big problem in the RPG industry? You people aren't saving goats.

Look at them:
Save them!

Ok that was mean but anyway save a goat. They're badass.

There's like, what? Almost no Icelandic Goats left. Like there's 8 or something. I don't know, not a lot. 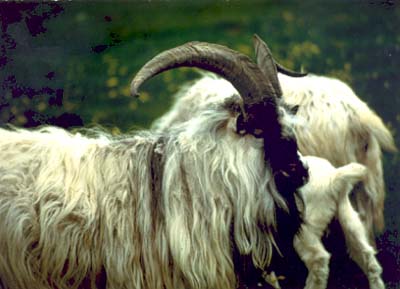 Check how fucking metal:
He's a metal goat. And endangered as fuck.

You know what's Old School? Goats. Goats whose lineage predates the settlement of Iceland over a millennia ago(at).

Soon a farm in Iceland's gonna close and that's gonna be like half the goats there were. Right there.

As of last count here was less than 600 of this majestic and imperious, and fleecey beast. There isn't enough goats, ok?

So skip that splatbook and save a goat, you got it?

"But wait," you may be saying "I'm an indie gamer, I'm not metal enough to save goats!"

Don't worry, they also make them in NewWave:
Check it:
For 1000$ you can even adopt and name a baby goat.
Goats rule, ok? And there isn't as many goats as there's supposed to be.

Lol! In our games goats are a standard live bait to lure out bigger prey such as dragons and giants. And by goats I mean dozens of them!

But putting that aside, fun and also uplifting post!

My Dad had a goat years ago. No, I'm serious. He had a goat. He was living in this rural town in Upstate NY.

I forget its name. It was cute. It liked me, but not my little sister, which was weird because all animals like her. They come out of no where to sit near her. She's like freakin' Snow White.

If you want to make some money off of the cashmere producing goats, you can look into the Icelandic Sheep Breeders of North America: http://www.isbona.com/index.html

Saving the goats needn't be altruistic. there is serious money to be made in specialty meats & cheeses; but more importantly in non-Asian cashmere.
Why we haven't turned half the Yukon into a giant goat herding sanctuary and put China out of the cashmere business is beyond me.

I am here to argue the opposite. Fucking kill goats. They are a pestilent and invasive species, causing significant environmental damage. Would you like to know why the middle east is a desert? Goats.

Feral goats are a major problem in Australia, the Galapagos and the Juan Fernandos Islands. Also they are delicious. Let's band together to remove this horned and bleating plague.

Goats for some, miniature American flags for others!

There maybe a ton of problems with goats in the middle east, but "invasive" they are not. At least not there of all places.

Oh, and feral goats, with all the problems for the diverse ecosystems they invaded (Or more precisely, were invaded into), equals not old icelandic goats hold in captivity. Your are making them a scapegoat for other goats' faults. For the biodiversity it is important for us to keep this old races avaiable as part of the gen pool. Who knows, maybe they are eating less than other goats...

And, finally, even though I agree about goats being delicious, for most people the taste is rather strong. Like biting into an old sheep shed's straw. :)

Christ, did that one in the second picture sit for the classic Mendes Goat woodcut or what?

Seriously, though, don't let these kick-ass goats become like these once-kick-ass dogs, domesticated with love and loosed upon unsuspecting ecosystems. Turnspit Dog! You should be turning my goat meat over the fire!

I had a dream about saving a goat last night. But then it gave me spider-fleas (fleas with long, spindly, legs. They're not real. I dreamed them up). If I believed in nonsense, I'd say that my dream and your post were more than coincidence.

LOL. Glad you're back!

Hey you talked me in to putting few bucks in to that fundraiser and I mentioned this campaign to italain artists and game designer who shares your enthuism for subject.

How about an exclusive, limited run of Vornheim with an alternate, goat's head-featuring cover with the proceeds going towards the saving of the goats?