You Will Always Have A Home Here

No-one knows if The Snail Quarter (home to all living adventurers) is well-named or not--whether it fades slowly from city to city or whether it shifts quickly at hours when no-one near is sober enough to notice. It is often first noticed on Sunday mornings, appearing like the writing on a newly but predictably vandalized wall along the edges of exhausted districts.

In the City State of the Invincible Overlord it is known as the Thieves' Quarter, in Lankhmar it is the Interlopers' Quarter, in Vornheim it is the Sixth District, in The City In The Waste it is the Fugitive Quarter, in Greyhawk it is The Intermittent Quarter, in Ptolus it is Quiettown, in Sharn it is Greyedge, in Orthrist it is The Neophytes, in Budapest it is Csigavaros, it is The Quarter On the Far Side Of The Corner, the Quarter Underneath.

If you have a living PC anywhere in all of D&D, Rolemaster, Warhammer, LOTFP, Pendragon or any other game like that, they have a home in the Snail Quarter. They may not want it, but there it is. 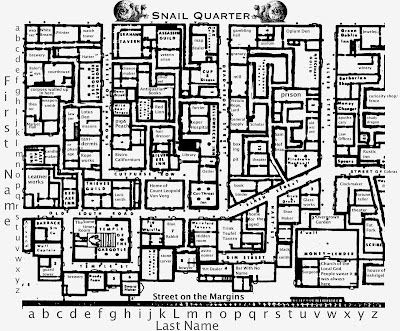 To find your PC's home just click that picture and search by your own first and last initial. So if you're Dwight Eisenhower, your  PCs live over the northwest corner of the Sword-Rat Resthouse. Why do we not go by the PC's name?
Because this way GMs can find you: If you want to find out who lives over the Assassin's Guild, find a C.K. and ask.

If your grid position indicates a home in the middle of a street or courtyard, that means your characters' apartments are inside one of the many bridges arching across the streets in the area.

Practically speaking, you can do whatever you want to your PC's room--just write the tag #SnailQuarter when you put it on the web to it so people can find it, see what kind of furniture, loot, or traps you keep there.

If you need a populated city district, there you go--just ask your friends who is where. If you are friends with Madonna or Darlene or Moebius or someone else with only one name, treat them as someone whose first and last initial are the same letter.

Over at grid Z/S, in a tower connecting the buildings along the Street on the Margins to the city wall-- Gorgut the Weasel (elf 1), Hellwheel the Moon-Slinker (wizard 1) and their ward, Slovenly Trull (half orc fighter 1) share an uncomfortable suite of rooms down the hall from warring zealots--Oculus the Unquiet (cleric 1), and Xorth the Insinuator (cleric 1)--on the second floor while, six floors above, it is rumored that Baron Blixa von Apfelsaft (thief 7) keeps a war elephant, a flailceratops and a xortoise. It would, at least, explain the noise.

If you want to meet Mordenkainen, I hear he's over the Dewy Dryad, and it is said Conan keeps rooms high above the locksmith on the Old South Road.
_
_

Zak, nice illustrations for Seshati Pyhatia, and E'rsae (and it looks like Zikcub, too?). So glad that Petty Gods is finally out in pdf!!! Thanks to Peter Gifford, who did the layout and Klattu at Gorgonmilk for keeping this project alive and good luck on their upcoming expanded version.

thank you. yeah i did zikcub too

Zaunn the Thaumaturge is thrown from his bed as his wagon comes to a sudden stop. Opening the door to swear at his henchmen he finds that the wagon has come to stop atop a bridge three storeys above the candle-makers and orphanage.

His hirelings look at his with startled surprise. "Make camp." he says and returns to the arms of his wife.

It's lucky (funny) that you use me as an example, because I was getting all agitated about that wall being in the middle of my row. Assassin or veterinarian?!

I imagine the barbarian shop being filled with Conan-looking guys kept in very strong cages. Love the map, by the way.

This is wonderful. Totally stealing it. In my campaign's tentpole city, Kopno'domas, the natives call this district The Moss.

In RuneQuest, they call it "Bad-Side", in Pavis.
In Kos, it is known as Lowest Loe

Above the meadhall? What could be sweeter?