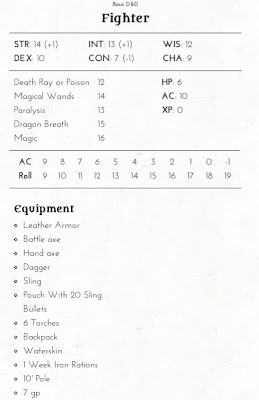 As an esteemed game designer points out...

luke crane6:40 AM
He's missing languages and alignment. Also, he's not using the rule that allows you to reroll HP if you get 1-2 at first level.﻿

Zak Smith10:29 AMEdit
He must figure choosing language and alignment is trivial (workloadwise) and important enough (character designwise) to pick after the fact﻿

luke crane10:36 AM
Just saying. Not instant or random.﻿

Zak Smith10:40 AMEdit
+1
"Very Fast and Largely Determined Via Stochastic or PseudoStochastic Methodologies"?﻿
He's also doesn't pick Magic-User spells for you.
Anyway it rolls 3d6 in order for you and picks class based on the best stat
Check it.

Another answer to those minor complaints is that this generator was largely designed for use in a ODD (Little Brown Book) based game of high anxiety that the author plays in where 1) HP are generated with a D6 at the start of each session (and 1HP happens) 2) There is no alignment 3) There is a random spell book rule (which is pretty cool - though so far all anyone's gotten is read magic), but it is indeed not included.

Pure text output, total party kill, elaborate subdomains. Sorry everyone this gent (or gentette) is my new favorite. If only it supplied a randomly suggested affectation animal....

Hilarious. Where was this discussion happening? Yeah, I was trying to churn out the mechanical stuff. I could pick random alignments and languages, but that seems like maybe it should be a player choice. It lists when you have bonus languages now. I'm going to add random spells next.

Also there isn't a rule about re-rolling HP. You could just re-roll the character, anyway.

Wad Luke Crane really complaining about a FREE generator that someone put out just because it would be cool?

Quoth Luke after this blog post: "I think this is a fun tool. I'm being cheeky pointing out the things he missed. But if I were using it, I'd want a complete character so I could click and go.﻿"

Quoth the inventor, now:
"It now does a random spell if you're a magic user, and picks random languages if you get any. (Based on the tables in the Moldvay book.)

all this is happening on G+