I Think I Managed To Make Humpty Dumpty Scary 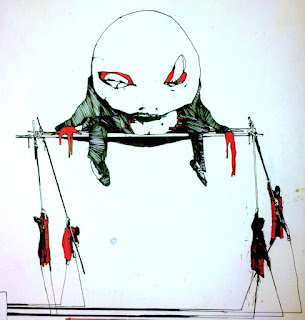 Red Rooks Magical creatures (Red House)
Rooks are hulking grotesques that lie inert for days at a time. They Red Rooks (or Moddochs) serve the Red King and outrank pawns, bishops and knights. They possess gruesomely frowning domelike faces and arms and legs like afterthoughts. By night, they are moved about on palanquins by teams of red pawns.
HP 100 Speed Sessile
AC 5 or 15 Intelligence 15
Attack
-Riddle: Red Rooks may ask one foe a riddle per round:
*The foe may not move (though s/he may speak) until the riddle is answered.
*An incorrect answer does 2d6hp damage to the victim (who still may not move).
*Saying "I don't know" or otherwise giving up inflicts 3d6 damage to the victim (who still may not move).
*This state of affairs lasts until the Red Rook is slain or the riddle is answered (by anyone in earshot of the victim).
*However: Red Rooks (and GMs that run them) are known to frequently give nonsense riddles intended to have no answers, such as "What has 47 claws and is made of pain?" in which case "That riddle has no fucking answer" or suchlike response is wholly acceptable, and will break the spell.
-Throw things: pull of clods of earth or floor and throw them +6 to hit d8damage.
-Bite: +4 to hit d8 damage. (If being attacked with a weapon keeping the attacker at arms reach, may bite the weapon.)
-Misericorde: A cruciform hardwood (lignum vitae or ebony) stiletto specifically designed for impaling vampires. In a pinch it can be used as an ordinary weapon: d4 damage, no to-hit bonus.
Defense
-Immune to magic.

Nice picture. Looks like something from a Clive Barker book.

humpty dumpty was a cannon tower in English civil war

Did you mean to use "Red Rook" and "Pale Rook" interchangeably. Both are in the description, but I'm still not sure what differentiates them, except for the color.

That drawing is worth the click. I'm loving the attacks rules as well.

I likes it how it's like "oh that's not heaps creepy" but then you click to enlarge and it's like "what are those things on the sticks?" and then the scale is apparent and then it's creepy

I'd suggest including Hit Dice for saving throws (and several spell effects use HD).

Wonderfully idiosyncratic interpretation of Alice in Wonderland, you're deep down the rabbit hole for sure!

I am actually including a "reference creature" for each entry, so you can just make to-hit and saves equal to that creature in your home system.