Climbing On Big Monsters (After Scrap) 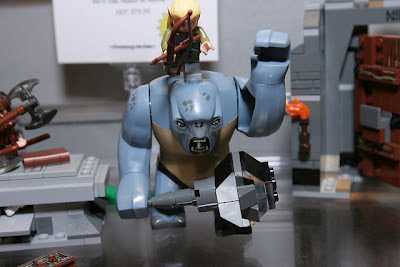 I know Scrap Princess did a more elaborate version, but how's this sound?

Attacking big monsters: for every round spent climbing on (not attacking) a big monster without falling or being thrown off you get +2 to hit and damage for when you do attack while on it. You are also protected from many of the creature's usual attacks depending on where you're climbing and what part of it you're on.
If it tries to throw you off? Save or dex check or whatever the climb mechanic is.
I figure that's the monster's attack, not yours, so holding on isn't an action, but trying to improve your position is.﻿
_
Mathwise this idea is in your favor and better than just hitting from the ground if:
-you're good at climbing (dex), and
-you can manage to stay on there for a long while and keep hitting from the position you get in--skip 2 or 3 rounds of regular to-hit chances in exchange for several rounds of harder hits, and
-the monster's morphology makes it hard to direct its most dangerous attacks where you are
...which should explain why Legolas and the Hobbits climbed up on the cave troll but Aragorn and Boromor didn't bother.

Email ThisBlogThis!Share to TwitterShare to FacebookShare to Pinterest
Labels: rules

Should work the other way too - giant rats crawling on you for d3+2 damage, ouch.

Pixies and brownies, sure, but not rats--part of the premise is you are an intelligent creature climbing to strike at a more sensitive spot on purpose.

Mutated intelligent rats that talk and squeal gleefully and go on at length about how NICE it is to have guests as they rip into your throat and eyes.

Man this guy Mark's workin' on a whole other level...