This happened on Google +.

You kinda have to read the whole thing to get the full effect. Most names have been removed to protect the innocent and the guilty. 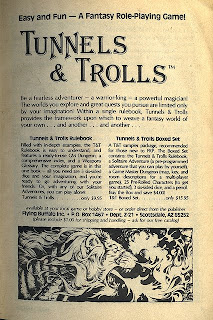 43 comments
(Somebody) - Tunnels and Trolls much easier to play when drunk
Yesterday 6:55 PM +2

(Somebody) - and when they roll dice they spin in the opposite direction
Yesterday 6:56 PM +1

(Somebody) - its true we Australians can stand on our hands for days at a time
Yesterday 6:57 PM

(Somebody) - I could definitely picture Bon Scott as being a Runequest fan, but the rest of the band definitely strike me as more of a T&T kind of crowd.
Yesterday 7:06 PM

(Somebody) - On a vaguely related note... Palladium's TMNT "Mutants Down Under". It hasn't aged gracefully. Racial slur on opening page. 0_o
Yesterday 7:14 PM

 
Zak S - I WILL HEAR NO ILL OF THE SECOND BEST-ILLUSTRATED BOOK IN THE HISTORY OF RPGS THAT ALSO HAS PUNK UZI KANGAROOS IN IT!!
Yesterday 7:14 PM - Edit +1

(Somebody)- The Palladium Fantasy book "Adventures in the Northern Wilderness" also has some kick-ass Eric Talbot artwork. Siembieda had a good eye for artists back in the day.
Yesterday 7:19 PM (edited) +1

(Somebody) - I figured they'd watch more TBS than anything...
Yesterday 7:23 PM

(Somebody) I must now ask for the name of the BEST illustrated book in the history of RPG's that also has punk uzi kangaroos in it.
Yesterday 7:35 PM

 
Zak S - 3o thieves and the thunder chief. Best illustrated? the 2 volumes of Realms of Chaos: (Slaves to Darkness and The Lost and the Damned) for the original Warhammer
Yesterday 7:55 PM - Edit +1
 
Ken St. Andre - I love that song, Dirty Deeds--Done Dirt Cheap! Never made the T & T connection before. Hey, you should tweet that comment, or let me do it. :)
Yesterday 8:01 PM

(Somebody)Is that some of euphemism y'all kids use now-a-days?
Yesterday 8:20 PM

(Somebody)YOu can blow up a lot of tunnels w/ Trinitrotoluene
Yesterday 8:24 PM 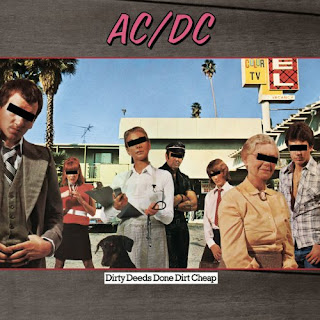 (Somebody)In that the Google building has literally collided and struck the Twitter offices?
Yesterday 8:28 PM

(Somebody)OED: "North American - displace from a job, especially in favour of someone else: she was bumped for a youthful model "

(Somebody)- There's nothing infantile about playing pretend!
Yesterday 9:05 PM

David - True...but there are levels. I've heard the game itself is solid but "Yassa Massa"? Really?!?
Yesterday 9:10 PM (edited)

David- From the T&T 1st edition: "Yassa-Massa! To be used only on previously subdued monsters / foes. Total strengths I.Q. & Charisma. Will permanently enslave monsters with ratings lower then the above total." Amazing...
Yesterday 9:13 PM

David: I know, I was a child of the Seventies. That still doesn't prevent me from wanting the ask the designers: "What the f#@$ were you thinking?!?!"
11:47 AM

that's what i wanna read with my breakfast cereal.

'Done dirt cheap' is one of Ken St. Andre's main reasons for putting out T&T. The other was to create an RPG he could understand and play! :-) I loved that he explicitly *stated* so in his Foreword to 1st, and I believe 2nd(I've never seen it. Or 3rd, either...), Edition T&T. Then of course, TSR complained and they hadda get vague about the whole situation. But that's how it goes.

What's even more awesome is that The Chaosium specifically cite Ken St. Andre for 'proving that Pandora's Box can be opened again' in the Runequest dedication. Great, friendly cross-pollination bitd.

And speaking of cheap, T&T's prices are only $10 more than shown in that ad. You can get the 1979-era 5th Edition Rulebook and Box Set though, with the virtually the same contents, to boot, from FBI for 19.95 and 24.95 respectively.(Technically the 5.5-circa 2005 'update', which is only about 30 more pages which don't invalidate *anything*. Astounding in the age of Errata flurries, imo.) And that IS Dirt Cheap nowadays.

Also, how solid is a rulesset *still* in print from 1979? And actively played, even supported, mind you!

I'd be remiss if I didn't mention the most recent, and slightly different, T&T EDition: 7.5(2008, IIRC), which is Ken St. Andre's favorite so far. Amazingly, the existence of two in-print, supported Editions has caused no acrimony amongst the fanbase. Many people will play either. And quite a few aficionados few borrow distinctive elements across the two editions.

Effete Nobles and Filthy, Pox-ridden Beggars, Debauched Sorcerors(Meet the Party, folks! :-D ), and Random Demons out of Rhyme and No Reason! Oh man, what I'd give to see the I Hit It With My Ax crew tackle Stormbringer, 1st Edition! Or T&T 5.5E, for that matter.... :-)

I needs moar Stormbringer! Too many campaigns right now, though....

Oh, for anyone who didn't know(and cared to): Yassa Massa persisted up until 7th Edition in 2005, when it became Spirit Mastery!

A humorous post, made all the better with a run-in with the Trollgod His Own Self.
Thanx for posting!

@velaran
You could've easily seen 2/5ths of the Axe crew play Stormbringer 1E but you didn't check the constantcon calendar...

*Curses lack of online free time over the last 8 months*

I bet there was at least one Runequest-style Limb Storm, too... And no doubt, a scurvy beggar. At least if your experiences were anything like mine.

Can't have everything, I guess. The home crews are scared stiff of Runequest 1E/2E variants, what with the legendary(and frickin' Cruel and Usable) lethality. Rolemaster and WFRP 1E(even with its cheesy Fate Points, no less! ;-)), no way! CoC's no prob, though... Go figure.

O Yea, from now on, when I get the chance, I'll drop by Constantcon's site and check its schedule. Especially if T&T 5.5, Stormbringer 1E, Street Fighter: TSG, or maybe, just maybe, *Underground* comes up.

Thanx for the response!

I was also reading this with my breakfast cereal. Now off to class.

@syrus w.
reading zak's blog when i wake up in the morning usually has that wonderful breakfast cereal effect.

i should strictly ban myself from reading it when i have journalism-related tasks though, as this seriously increases the time it takes to finish anything.