So Nine-And-Thirty Kingdoms (always worth a look) posted this method for procedurally generating landscape instantly using what he calls over there "dice-maps" and what I call over here "die-drop tables" for reasons lost to time.

Basically his idea is, you drop a handful of d6s on the piece of paper and it gives you a map of nearby stuff plus distances to it.

This first thing I thought is, for any given landscape, you could go to Google Docs, quickly make a pie chart, and stick it in the center so that you could make custom "collapsed" maps for any given continent or area. So you not only know the distance to places but their character as well. Just extend the pie lines out and features in that sector is that kind of thing. This took 3 minutes: 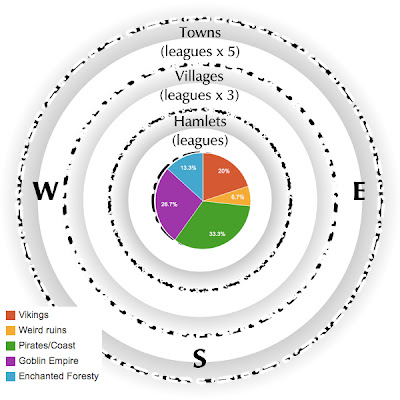 Then I figured you could do this for buildings, too--though in a slightly different way. Basically you write a "destination" (i.e. interesting-stuff-having location--the kinds of things where you start drawing and think "I know I want a lich riding a wereworg in here and a pile of old tapestries but that's about it...") in each part of the pie, then the dropped dice indicate how many rooms away in each direction said feature is. The numbers that actually come up on the dice can then be your wandering monster rolls for each direction. A little ball-and-stick flowchart connecting-the dots and bam--instant dungeon. Good for when the PCs reach levels you haven't finished yet... 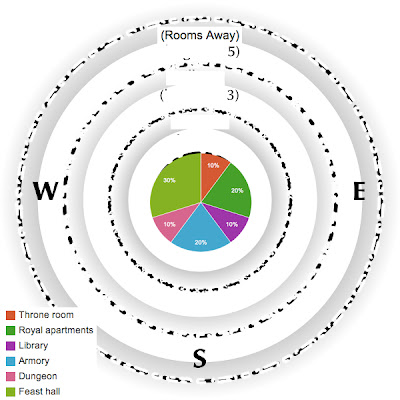 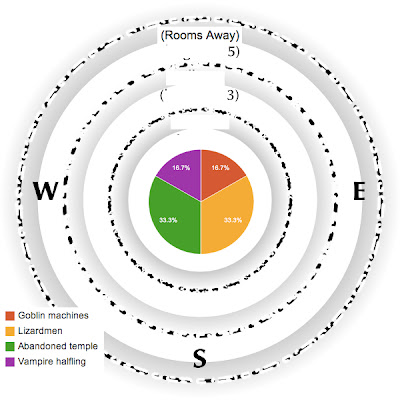 In other news, the second one came out as an inverted peace sign for some reason.

Ah, that's what I thought you meant by the pie-chart comment.

Incidentally, the reason why I call them something different -- "dice maps" -- is because when I started using a technique like this, I was literally using them for dungeon maps: dropping d6s on a sheet of paper and drawing boxes around the ones with "boxy" pip patterns (4, 5, 6). Lately, I've been including both names in my posts, since I figure more people are familiar with the name "drop-die"/"die-drop" ever since Vornheim.