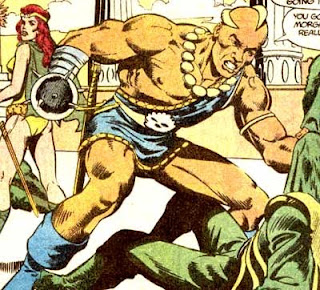 I regret that I cannot jump on the post Type V D&D Announcement Telling Game Designers How To Do Their Job bandwagon since I already did last month. However, let it never be said a week went by without me bringing in some solution-to-a-problem-nobody-had from left field
If Wizards doesn't want it, someone else can take it. Free:
Strike a blow for social justice and for keeping RPGs totally metal by creating rules for damage resulting in permanent handicaps and badass ways to overcome them: weaponized prosthetic limbs, seeing-eye jaguars, sword-tipped peg-legs, steampunk gnome ocular thingies that only work for a few rounds at a time, etc.
And, naturally, art directors--keep it sexy. Actually, expand the sexy. Give us hot maimed people and dyslexic people but also hot fat people and hot dead people and whatever else you've got (still have Brom's number?). America lags far behind the rest of the western world in non-neurotic thinking about sexy, give it a kick. 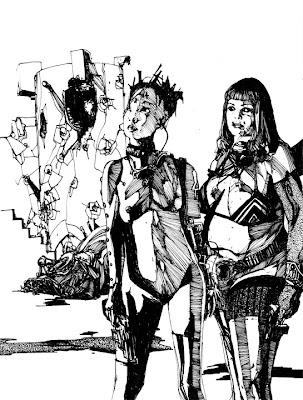 This here proof-of-concept is one of the pictures I did for my all-female cyborg space pirate version of Blood Meridian (that's the Judge on the right with the cigar). If it were up to me, there would be no pictures of men in anything ever, but more than half the population likes men so maybe put one or two hot, mute, deaf, blind, hebephrenic guys in there too. I guess. Worked for Michael Moorcock.
Oh and remember, even Tieflings don't have to be skinny goth chicks... 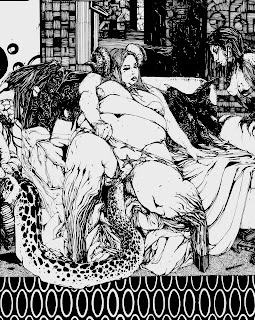 Fantastic artwork. I really like the detail you put into your pieces.

Anyway! I am definitely pro pictures of dudes! Yes.

I made those damage rules already. They are 'a table for avoiding death' on my blog. Results in delicious maiming.

So if you listen to Zak and Blair, you might just have a sale. Otherwise, nah.

This is from a Dragon Mag from way back in the dark days before there was even e-mail. It's a good guideline to develop your own rules around. Always willing to help fellow gamers, and pretty young ladies who love exploring their own imaginations. Best to your and your group of gamers and hope you're on the mend. Best of luck.

That critical hit system requires an entire extra roll after the to hit roll. You also have to perform an additional operation to even know if the second roll is successful.

I think you're being snarky, my brain is tired so I'm not sure. I just wanted to say that last illustration is glorious.

The fact that something like it would never, ever, ever, ever, find a place in a corporate produced Dungeons & Dragons product is one of several reasons all the excitement over 5e is depressing to me.

Oh, I see, it is about a blog post referenced on Google+. Whatever, still like the last pic.

"That critical hit system requires an entire extra roll after the to hit roll."

The fast way to use that system is to always roll a d10 *with* your to-hit roll. The d10 is the tens die for the crit/fumble roll. If you get a zero or one on the d10, then roll the ones die and do the math. Otherwise ignore the crit fumble rules. This method gets extremely fast after only a few uses.

Your post reminds me of another gripe with Type IV -- the uniform art style. I think you blogged on this before. Every single Type IV product seems to have the exact same official DnD™ brand artwork style. What a far cry from the wild diversity we saw back in the 1E Monster Manual, with Trampier, Sutherland, Otus, etc.

always great.
I love the natural beautifulness of your models!

Thanks for pointing out that D&D characters can be fat and still be drop-dead gorgeous. Same as real women.

...Actually, that gets me thinking...

I have nothing to add, I just wanted to say "all-female cyborg space pirate version of Blood Meridian" again to hear how it sounded.

Well, I mean, I guess heavy breathing is an addition, sort of.

As a fat gamer equally passionate about keeping RPGs totally friggin' metal and sexy fat women, I applaude you, Zak. Once again, you blow my mind.

I appreciate the input. My idea in posting the pdf link was to give one example of a critical hits table I've used in the past with some success. I figured it could serve as a guideline for them to develop their own house rules, and what might work best for their group of gamers.

The advantage of a critical hits table is that it introduces an element of realism in the game that many people find lacking, but you run a real risk if the system gets too out of hand. What worked for was when someone rolled a nat:20 in combat, the DM would tell the player to roll again. If the result would have resulted in another hit, they did double damage. If, however, they rolled another nat:20, the DM would have them roll again, with the possibility of doing triple damage. If they rolled three successive nat:20s in a row, the player kept going and we consulted the charts in the article. It's very rare that anyone will roll three natural 20s in a row- but it did happen from time to time, and if you did, the results were spectacular.

On the bad misses, if you rolled two natural:1s in a row, we consulted the bad misses table. Friendly fire --isn't friendly. grins.

This system worked pretty well for us, it was quick, on rare occasion, someone did something that was truly heroic, and the danger to life and limb were very present in the game.

Ultimately, D&D is made to be tweaked and tinkered with and improved until it suits each individual gaming group. Whatever house rules you decide on will add a unique flavor and character to your gaming world. Again best of luck, and have a blast with it. Never forget the magic is in the group of friends you toss dice with.

no offense but you are writing like someone who's never read this blog before. most of that stuff is well known around these parts.