I have long casually assumed that the world Vornheim is on is cube-shaped. I figured: the whole planet is artificial and made of solid dungeon beneath a thin layer of vegetation, so of course it's a cube. That's about all I thought about that.

Then somebody--Stoya, I think--linked to this and I saw a few of the implications of a cube-earth.

One of the most interesting bits is: because the atmosphere would still radiate outward in a sphere from the planet's core, the habitable areas would be limited to non-communicating separate circular zones on each face of the planet. 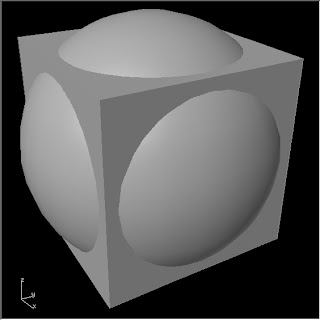 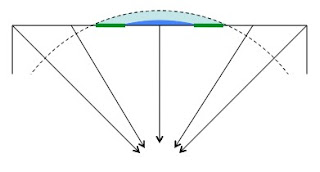 In this set-up, the Medieval mind (and your non-curvature-adjusted gameworld map) is kinda right--the world is flat. You can literally walk to the edge of the (or, your) world, but before you did, you'd reach the edge of your atmosphere. However, if you could brave that, you could walk around the corner and reach another, entirely different biosphere.

(Note also that, depending on all kinds of physics, these other sides could have a similar or totally different climate.)

Now, obviously, in a pre-NASA civilization, the best way to get to these other biospheres would be to go through the earth and come out the other side. Bam, you're in a new world or--literally--on another plane of existence. And that's why they're called planes.

How did your FLAILSNAILS dwarf get from Vornheim to Greyhawk? Obviously he went straight down, took a right, and kept dungeoneering in that direction until he hit the surface.

Now this same exact set-up (non-communicating biospheres) could work with any radially symmetrical polyhedral world. i.e. Like a d20-shaped world could work like that. Easy... 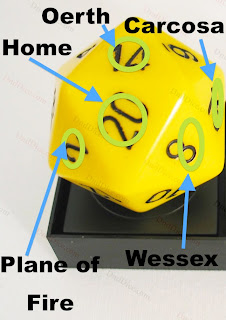 So there you go: get from one plane to another with no Spelljamming, no magic (except all the physics-abuse it takes to make this basic shape plausible and a million other things I'm ignoring because I like this one single thing about the real physics), no Planescape, no portals, no fuss, no muss. All you need to do is find a dungeon with a sharp turn.

This explains why all the good stuff is down in the dungeons to begin with: that's where the trading happens. And, of course, why it's all so weird. Evolution took a different turn on face 8 than on face 9 due to the angle of the sunlight and all that...

It also makes it really easy to map an interplanar campaign. A few vertical geomorphs and 3d-maps and you can actually figure out where, in physical space, the DM put the other planes.

This is really awesome. I've always wanted to do a planecrawler game where the planes had some kind of actually spatial relationship to each other but was never totally sure how.

This changes things and I'm very excited about that.

Awesome. A person sitting on the center of the triangle would see three huge mountains sticking out of the atmosphere, albeit a bit hazily. The number three would probably be pretty important to the old astrologers on DoDeka World.

Dang. I gotta use this somehow. :)

Michael Curtis posted on the same topic the other day, noting a similar device used in "The Adept's Gambit" by Leiber

This is pretty goddamn awesome. Props to Stoya.

Wow, interesting -- and great collaboration with your players on the world building!

I had a similar world building project with 19 other world builders. Everyone had a retangle on a d20 and created a complete world on it and had to solve problems with his neighbor.

It was quite interesting, but it was very hard to motivate 20 peoples for building a world together.

But your version is very inspirating for an idea of an multi-genre RPG-World, which I want to build next time.

Very cool - now we know what Bizarro World would be like.

Yes. I love this too. It might be fun to mess with reducing gravity as you get out towards the Atlas mountains or deep, deep into the centre of the megadungeon. Reminds me of R A MacAvoy's Damiano trilogy, where hell was at 90 degrees to "normal" reality, so if you travel there you always arrive with a sideways bump.

That's brilliant! I'm soooo glad a saw it a week before I started mapping my new campagn world.

So Hell and the Hollow Earth are both the stories of people who ended up on another surface without realising it.

Mmm, I like this. I especially like the way the faces connect via the underground. When my sinuses have stopped trying to kill me I'll poke about with this concept. Maybe use a dodecahedron? I like me some d12s. :)

This is stellar! but, damn, a ton of thoughts & questions pop up:
gravity - would it becoming crushing as you approached the center of the world?
if gravity increases, your strength and dexterity decrease while inhabitants of those realms would presumably have an increase in those attributes.
direction - closer you are to the center the less you could determine direction w/ a compass, easier to get hopelessly lost.
if you fell down a tunnel that crossed the center would you be spit back out the other side?
can you breathe air that far down? torches would probably exhaust oxygen and magic illumination would be necessary.

this is waaaay cool.

Victor: No, gravity doesn't increase as you near the center of the world. If the world is effectively spherical and the density is roughly constant, than in fact gravity decreases as you approach the center. Imagine a sphere that is filled in except for a small hole at the center. When you're in that hole, there's no gravity pulling you towards the center--after all, there's no mass there. There is gravity pulling you from the other side of the center, but that's balanced by the gravity pulling you away from the center, from all of the material outside of you. So if we now assume a roughly spherical shape to the world, which I think for these purposes an icosahedron would be (even though it's not at the surface), and tunnels honeycombing through it, then gravity will gradually lessen as you approach the center. The very center will be roughly zero gravity.

I'm not sure about the density of the air there; I suspect that the vast amounts of air above it weighing it down would result in a super-dense atmosphere that isn't breathable, but I'm not positive. A bigger problem might be that water would tend to drain in to the center. If any of the surface oceans connected to the tunnel system, they would drain inwards to the middle, unless the tunnels were filled with water.

Probably best to use it as freaking awesome inspiration and leave it at that. :)

This is brilliant! I love how this concept allows for a myriad of small worlds that can develop independently and yet be able to interact through a couple of individuals.

It also makes developing an interesting underground ecology sensible. If the only way to trade with other worlds is the underworld then the underworld becomes a focus. People caught halfway between worlds grow and become their own unique cultures. Controlling/creating/discovering these subterranean highways can be the focus of entire campaigns.

The beauty of this model is you don't need to decide anything! It can just develop organically, sandbox style!

Very cool idea, props to Stoya and you, Zak, for developing it further. It's stuff like this that keeps me coming back to this blog each day :)

That's definitely clever, but...doesn't it push the idea of "planes" away from "fantastical" and toward "banal"? "Oh, it's not really a different reality, it's just somewhere you can walk to."

The only genuine use I have for "planes" in my own game is explaining how PCs get from one Medieval earthlike world (Vornheim) to another one (like Jeff's game or Ian's game) so I didnt really think about it much.

If you think of this as being a 4-dimensional concept, instead of a 3-dimensional one, there's no reason the "planes" can't all be actual spheres, but otherwise everything still works the same way. If you dig down deep enough, you WILL come out of the other side of A world. Just not YOUR world. But I love the idea of combining this with Philotomy's "Dungeon as a Mythic Underworld" thing with your "this is where trade happens" idea. Also, I love how the sphere within a cube (or a d20) helps explain this relationship, even if you want to make all the worlds spheres (which I need to, because my world is established as such). Awesome post, and pretty handy for that freaky magical/but-still-kinda-science flavor I love. :)