Caves of Chaos Is A One-Page Dungeon 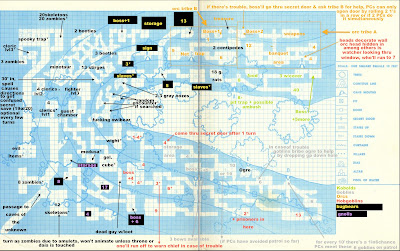 Don't get your suspenders twisted, copyright holder of record, this is just for educational purposes...

Y'all know how much I despise inefficiency. So I did this experiment to see exactly how much of the Caves of Chaos from the "classic" (translation: old) module Keep On The Borderlands I could fit on the map.

Answer: most of it.

The numbers refer to the number of each humanoid faction in that room--the color code on the right tells you which kind of monster it is.

If you've read the module even once, you can pretty much run any encounter in the caves using just this and the monster stats up to the point where the PCs start looting the dead (treasure is not listed).

Rooms where the room key gives some information not already on the map that's relevant in a fight are marked with a *. (Though generally this is not a lot of information--most of it is about as long as the notes that are written out in the margins of the map--"Gelatinous cube attacks if PCs are in room for more than 3 rnds and has treasure inside it" etc.. I just chose details that I could make fit.)

Room descriptions are obviously missing, but if you have any familiarity with the monsters involved you can pretty much make those up--there's a ton of filthy slimy guard rooms, the ones
with lots of guys in them are the common rooms and the ones with the bosses in them are fancy by local standards. The "independent" monsters live in bone strewn caves--shocking, I know. And if you can't figure out how to describe what the rooms where the evil priests and skeletons and altars over on the left look like, you should probably hang up your DMspurs forever.

One thing I forgot: locked doors. It'd be pretty easy to add a little "locked door" symbol to the map, though. If you have a spare half hour to scan the module and pop some on, I'm sure someone somewhere will be grateful.

(Another mistake I just noticed--for clarity's sake, the "orc head" note on the upper right should technically be orange, not red, but my screen's all screwy so I didn't notice 'til just now.)

Anyway, if I can do this in an hour-and-a-half using only the graphics program that came free with my mac to a dungeon that wasn't even designed to be "coded", the big companies should be able to get way more out of someone with, say, an actual graphic-design program and actual graphic-design degree and 8 whole hours to kill.

So remember: If you ever find yourself flipping back and forth when running a module even if it has absolutely nothing weird or complicated in it, it's because they're lazy.

Some PC's, somewhere, are gonna want to attack the keep...

Very interesting. This is definitely putting your mapping where your mouth is.

Cool! I'd been doing this sort of thing in my games - T1's moathouse for example. It had never occurred to me that the format was a one page dungeon.

The Keep is actually a more interesting target to me, as a DM--none of this "ascending-hit-die-petting-zoo" business. But I did the caves because it looked harder and I had a point to prove.

Probably the best label I have ever read off a map.

This is incredibly useful. I was never able to remember which freakin cave had what in it.

Personally, I prefer the one page of text + one page of map format I've been working with for the last month. There just isn't quite enough detail there to jog my memory of what happened in what room from session to session if the PCs come back.

That encounter with a dozen skeletons is a hella-lot more fun with 40 or 50 skeletons. Sure the "surprise" in the other room with a bunch of undead doesnt' seem as cool but man oh man a bunch of low level undead is a fun fight with no moral ambiguity and no mercy.

Ah, the Vornheim format! I'm somewhat familiar with it.

Point is: there's better ways to do it than what they sell us.

Nobody is going to pay $10 for that. Even though it's way more gameable than the 32 page version.

Remember DCC's adventure on a card format from 3e? Those were $2 IIRC.

Excellent and inspiring post Zak. I can see the value of combining this style of map with the traditional module. It would make for a flexible product that took into account the referee's level of confidence/ability - or in other words the confident ref could just go with the map, others may lean on the module a bit more.

Looking at this gave me a thought. Applicable maybe to this module directly but maybe for other stuff in the future also.

What if you were to design something like an advent calendar, with little doors in the dungeon map that open to show you something underneath? Sure, it's totally a gimmick, but I wonder how useful it could be?

I think I actually tried to design a few dungeons similarly to this back in the day (meaning like 1983) but didn't have the skills to pull it off.

(similarly to your graphic, not the advent calendar thing)

Not sure if it's laziness or lack of vision.

Back in the old SPI, graphic genius Redmond Simonson was a whiz at putting important information on the map. Combat results tables, reinforcement schedules, etc.

Sure, that was for wargames, but the principle is the same. Good design is useable; bad design just gets in your way.

One of the reasons I never liked modules was having to sift through all the filler to get to the important stuff. Just easier to make it up via something like you have here on my own.

@chandler
my sentiments exactly. If the only thing in the room is 6 orcs, it shoudn't take longer than it would take me to think of something better to find the 6 orcs in the room.

got any examples of his work? (especially maps)?

Look the Keep totally attacked the dwarf's followers first. Just because they were charging tolls or something. And since we had been knighted for saving the Keep from that beholder it was totally uncool for them to throw our henchmen into the prison cells. And then the Keep's commander's mistress stole my elf's magic spurs AND her magic ring AND her magic sword!

All I'm saying is the Keep totally had it coming when we sent the war elephant against the front gate and threw those lit flasks of oil into the granary...

what granary? i am looking at it right now. there's no granary

I totally didn't know you used that format for Vornheim. That's hilarious.

I do agree with your point though and see your version as a huge step up form the original. Maybe I should track down my own one-page transcription of the Caves. I wonder it I still have it...

As a 4e player not used to a lot of the old modules...damn. That's a big dungeon. I know they get progressively bigger...but damn.

How many sessions would it take (reasonably) to explore/clear such a thing? Or is that even the point to the adventure? I dunno.

If you wanted to see all of that dungeon (and why would you? there are so many better ones) it would take 4-12 sessions, depending how much fighting vs. sneaking you did and how long the sessions were.

Though it does sadden me to hear that this is a big dungeon by recent standards. This is a wee little beastie to me.

Earlier this year my group ran through this very module, with me making changes to fit my own campaign (instead of Chaos priests, they were gunpowder-using Science worshippers, a terrorist group who reject magic) and updated to fit Type III D&D. I think, all told, the group went from 2nd level to 4th level, saw about half of the caves, and spent 7 four or five hour sessions there or the Keep not counting travel time there and back from their home base.

My map didn't start out looking like Zak's version, but it sure ended up looking like that. Not color-coded, though. I'll do that with my next dungeon. Very useful, I see.

I heartily endorse this format and wish everybody used it forever the end.

This format is a nice complement to the Vornheim map-plus-facing-one-page-key format. Back in the day, I used to do something like this with the old TSR modules. Those old light blue maps lent themselves to pencilling in notes like this. Not so much the full-color, glossy modern ones.

This works especially well for dungeons with different factions/sub-areas. It's easier to keep track of, say, nearby guards that might be alerted and come to join a battle. It gives a useful visual overview of the dungeon "gestalt" and helps the GM see how activity in one area might affect other areas.