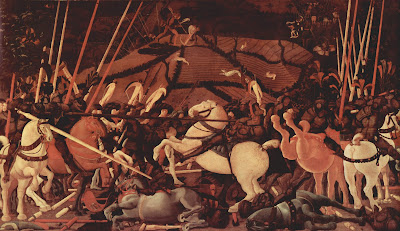 From The Great Pendragon Campaign, (5th ed I believe):

The unique nature of this battle warrants this special table for the Gamemaster...

To start, roll 1d6 to find the foe for the first round. Each round thereafter, roll 1d6 and go that many points down the list to find the next foe.

When at the bottom of the list, go back to the top, counting each number. Since many of the troops are unique, scratch them off if they were devastated and go on to the next one.

and 45 more results after that, roughly growing in strength--"Personal Enemy" appears near the end there.

Possible hacks for this format of mass battle table:

-Some results could just be "now you're fighting uphill, -1 to hit and damage for a number of fights = d4 minus your dex mod"

-Rather than rolling d6 to move up the table, PCs roll d4 and add either their worst dex modifier or highest fighter level to the result. If they are mounted, add the weakest mount's HD.

These tables can also be hacked so they don't just apply to PCs trying to make their way through a big battle, but for running a whole battle, with the PCs acting as generals.

-For a short mass battle, use shorter tables (10-30 results). PCs pick a kind of troop they'd like to "lead" with. That troop type (represented by one guy of that type) starts rolling on the enemy table and fighting until s/he dies. At that point, the PCs pick another unit. Whoever has the most victories by the end of the table wins. Or, whoever wins the last battle wins (this is tactically complex: if you lead with your strongest unit, they might get worn out before the end of the table--where the enemies' strongest troops lie. But if you lead with your weaker troops, they might roll high and end up facing a foe that outmatches them.) To get real complicated, it's whoever wins the most fights plus the last battle is worth 4 fights.

Casualty figures of winning units = 10% x number of total fights they got in before losing.

-If both armies are equally detailed, you could do head to head tables: two sides each have a table. Winner of each fight rolls on enemy table, first one to end of other side's table wins. When you lose, you cross that troop type off the list and your table just shrank.

-Campaign idea: by running around the sandbox and making deals with local bigwigs, fancies, and muckamucks, make your table as long as you can in preparation for upcoming mass battle. When the battle comes, PCs get to play themselves running thru the enemy table PLUS all the foes the enemy rolls as s/he attempts to slog thru the PCs' table. (For this one, the two tables could be shorter than d100, so there's time for both sides.)

-You could "recruit" terrain results onto your side's table (like the 4th result above) by choosing terrain carefully.

-A PC casting a spell with a large area of effect or large # of foes affected could turn a number of results in the enemy's next coming roll into "deal with this spell" effects according to some scaling rule like for every 20 square feet or 20 troops affected that's 1 result on the enemy's next roll. If they survive, they re-rolling on the table from where they left off.

So if you cast a rock-to-mud and it affected a 40 square foot area that'd mean the enemy rolling a 1 or a 2 would result in the unit they're leading with having to deal with how the ground is now made of mud.

-(This is kinda like building a Magic:TG deck isn't it?)

-Recruitment scaling rules for the campaign idea: every 100 troops = 1 result so a 100-result table ( would require recruiting 10,000 troops. Which seems reasonable to me, assuming the PC fighters'll be pretty high level by the time they get to the battle. Special troops (centipedetaurs, giant landsquids) could be presumed to be recruited at a level of like 1 unit of whatever size (4 giant eagles? ok) is just worth 1 result due to how mobile or powerful they are. Cavalry could be like 5-to-1, so 25 cavalry are worth one result.

-Alternate scheme: attacker is always the one rolling, defender is the one who builds the table. Depends on whether you want the game to be about building the army and choosing the terrain, etc. or PCs' experience during the battle.

I still use the old Bushido mass battle system from the 1980 Phoenix Games first edition. The DM runs the overall battle, the PCs select how active/heroic they want to be, with the odds of death increasing as the heroism increases and the system generates encounters based on how well the PCs side is doing and the PC risk selection.

Sounds interesting. Would you say it's so good and complete it supercedes this one or that it just kinda does a whole separate thing? Like would the recruitment system work with bushido?

I've always liked the mass battle system from the first edition of Legend of the Five Rings, so much so that I converted it to a different system. I think this one might be better though.

Our gaming group is full of wargaming nerds, so we usually bust out something like Warrior or Warhammer to work out huge battles. This is intriguing though - I'll have to convince them to try it out instead of spending 5 hours fighting a battle.