The 4 Horsemen Need Not All Ride In The Same Direction

Mandy and I are reading "Plague Peoples" by William H. McNeill.

Now any fantasy setting worth its salt has a Plague Lord or Pestilent Armies or whatever, but--to me at least--these have always seemed like moody, creepy, fun, but basically one-note villains. What desireth the Plague Lord? For people to have a disease and then be dead. Sweep across the land, infect, etc. The PCs job is mostly just to stop them from doing that while trying not to catch whatever whimsical ailments the DM has rigged up to fill out the Random Failed Constitution Roll Chart.

McNeill's thesis, however, makes me reconsider. He points out that the long-term survival of a disease depends not on killing every motherfucker but rather reaching a sort of equilibrium with the population of host organisms.

In other words: to a disease, humanity is not prey, but cattle, and you don't eat all your cattle at once, lest it fail to breed.

Seen this way, a Plague Lord or an evil cleric of the Plague Powers or Father Nurgle or a sentient disease or whoever has a rather interesting combination of motivations. For example, a pro-disease villain would desire the formation and maintenance of cities. Diseases love cities, especially medieval ones. So your plaguey villain might be just as interested in protecting the heroes' home as laying waste to their countryside (at least for a season or two).

To see the other Machiavellian possibilities here, imagine the four classic Warhammer Chaos Powers: Nurgle--the plague god forms easy alliances with Khorne, the war god, because invasions spread infection--however when war threatens to annihilate a whole city, Nurgle betrays Khorne. Likewise, Nurgle would ordinarily be inclined to look very kindly on Slaanesh--lord of depravity--however, if this depravity starts resulting in a miscegenated gene pool with disease-resistant hybrid vigor, then doublecrosses await. And, ordinarily, Warhammer suggests Nurgle opposes Tzeetch, god of intrigue, magic, and change--but they might temporarily team up to encourage some mass migration or displacement of people whereby all those virgin unimmunized bloodlines are exposed to alien pathogens.

And the disease god loves civilizations--chains of communicating cities--but will balk when these civilizations start producing minds that conceive of sanitary and medical advances--Nurgle backstabbed after collaborating with Thoth.

Point is, your Lord of Illness, via his or her earthbound evil-cleric and cult-leader representatives, can be a schemer at the highest and subtlest level. And the role-playing and deal-cutting and what-would-this-NPC-do calculations are pretty easy to figure once you start thinking: Ok, which result here would result in the most stable conditions for the spread of disease. A mysterious hooded figure agrees to fund our artifact-hunting expedition to the Jungle of Blue Leopards? Excellent!

More ideas came earlier in the day when a pal called up about maybe playing Paranoia. Thinking about it, I figured: I can fit this into the TMNT game. I came up with... 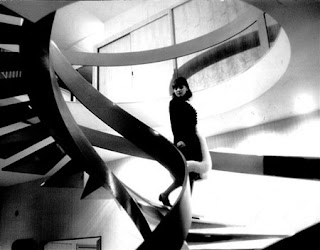 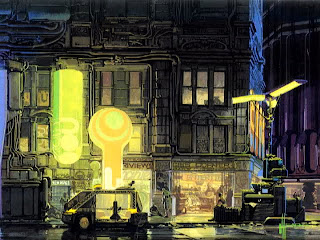 Alpha Complexe Soixante-- it used to be Montreal. Now it's like the Godard movie Alphaville + Alpha Complex from Paranoia. Everyone is sentimental, speaks French, and is trying to kill everyone else for reasons no-one can quite understand. Mass executions look like pieces of weird performance art. People smoke in noiry stairwells and commit suicide.

I also figure, in a D&D context, the same mix of ennui and inexplicable, enigmatic internecine warfare could easily be a hallmark of goings-on in Vornheim's neurotic sister city, Bellet Osc.

Then I took a short Google Image Search holiday and found out about Guild Wars designer Daniel Dociu... 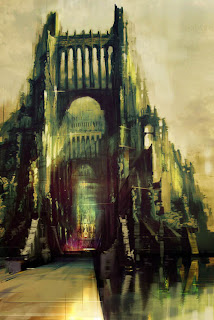 I figure the cathedral at Vornheim looks kinda like this. 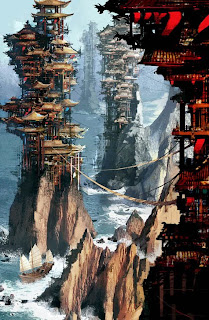 Sweet jesus this is awesome. This is either what Japan looks like in my D&D or in my post-apoc TMNT setting--depending on which campaign goes east first.

Then I figured, what the hell, might as well collect a few more pictures... 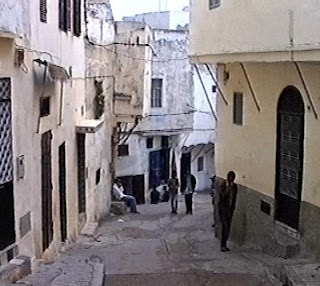 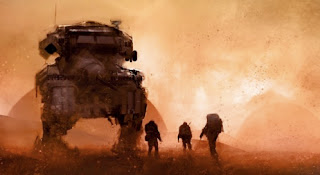 Red Meridian. I found The Road a disappointment so Red Meridian is what I was hoping a post-apocalypse imagined by the guy who wrote Blood Meridian would look like. I think it's in Eastern Europe.

It's official. You're the freakin' genius of creating the right mood. Just reading the couple lines concerning Interzone-Marioworld makes me feel like paying a visit there...
About the Plague Lord - that's exactly why the xenomorphs from Alien series are far from being efficient parasytes. A predator kills it victim, while a parasyte needs it alive for as long as possible.
Plague Lord might even support the right kind of medical science. The treatment that lets the patient live longer but doesn't cure him/her of the condition could be quite useful. Or something that eradicates the symptoms, turning the sick person into a Typhoid Mary - he looks fine, he feels fine, he can travel anywhere he wants, all the while spreading disease on his way.

Thanks for highlighting Daniel Dociu. His stuff is gorgeous. I especially love the two pictures of his that you posted up.

Also, good ol'McNeill. I often find myself reading his books and then saying "Huh, I never thought about it in that way". I think his interpretation of Nurgle is one of the better "shells". Otherwise, we have two Chaos Gods who love to destroy. It just happens that one likes blood and the other likes pus.

That bit using Nurgle is pretty great. I've sort of abandoned the "God of X" thing for a while, maybe it is a good time to revisit it.

I've always used the "Disease Guy" as part of same impulse as the "Lich Guy." You know, dying is scary & sucky, so it makes SENSE to me that a dude would be like "oh, sure, I'll be a messed up skeleton. I'm old already, right?" I do the same thing with Cancer Guy. Sure, he is a mess of disgusting tumors, but that is an unavoidable consequence of the Longevity Treatment!

or a sentient disease or whoever

I love how you throw that out there like an afterthought, when it's all sorts of Grant Morrison super clever.

I've often thought that the Mario setting would work well for D&D, but I've never done it for fear that once the players get the joke, there'll be no point playing on.

And the splinter cult, bent on the destruction of the plague lord, would appear to be villains for trying to engineer a more virulent plague which would run it's course. The plague lord, who appears gentile, would retain the PC's to assist destroying the cult...

What if the Plague God and all his or her minions were "Lawful Evil" in the AD&D sense and their whole reason for doing what they do was to facilitate natural selection and to make sure that only the most fit humans survive? I have been toying with that, myself, for my current campaign.

Brion Gysin's The Last Museum might add some nice flavor notes to Interzone-Marioworld. (I am still not 100% sure what happened in that book.)

The plague god notes are sheer genius! Its something I never would have thought off and I can really use. Heh Heh Heh ...

Language is a virus from space.

Also, that's the first time I've heard a complaint about _The Road_ from the direction of "not disturbing enough." Kudos, sir.

Myself, I think of _The Road_ as Hemingway-does-George-Romero. But _Blood Meridian_, why, that's Faulkner-doing-Peckinpah. The truly terrifying thing about _Blood Meridian_...have you read Chamberlain? Judge Holden: not fucking fiction.

Myself, I think of _The Road_ as Hemingway-does-George-Romero.

Which, in my opinion, is exactly what's wrong with it.

The last long running campaign (well a generation of it), had a paladin of the god of trade, visiting the four corners of the world and forging mighty trade empires, settling in the new world. Frequently he would battle followers of nurgle/disease god. It was only in the end that he discovered who had been watching over his convoys to far off lands..

I love the way you deal with RPG settings and try to make something original out of it (never heard of a post apocalyptic TMNT setting, but found the idea awesome). I am curious, did you ever played Call of Cthulhu RPG? If so, how did you deal with it? I'm curious. Good luck with the games!

Thank you sir for the Paranoia idea - I'd been toying with starting a game but this has really pushed it over the top.
Being in Montreal, I'm pretty sure none of my potential players would pass up such a game if it were based around your idea.

I go back to this post about once a year.