"The Penguin Book of Curious And Interesting Mathematics" By David Wells.

Looking looking, ok...there's a story in here about Charles Babbage and a pal almost accidentally ordering 50 eggs at a rural french restaurant due to an accent mixup. Then, before he'd gotten to Paris the story had already gone through telephone-game flanderization until the story was that he and his pal had ordered and eaten 52 eggs and a pie.

So here's a spell:

The caster casts this spell and then relates a true story to someone. This someone (who must be able to understand the story blah blah etc etc) will be compelled to re-tell it to at least one person and exaggerate it. Everyone who hears the story will, in turn, re-tell it and exaggerate it in turn until the caster chooses to end the spell. When the spell ends, reality will be altered such that the exaggerated form of the story is now true, with all the effects on reality that would imply.

The caster must allow the story to grow for at least one week, but may allow it to expand for months, years, decades, or even centuries--if s/he is able to find a way to stay alive that long. The longer the story is left to grow, the more exaggerated and thus powerful it becomes. (GM's discretion on exactly what form this exaggeration takes.) The caster may check the "progress" of the spell at any time by asking appropriately gullible locals if they've heard the story and what exactly they've heard.

The only way to prevent the spell from taking effect is to kill everyone who knows the story before the caster ends the spell. Under ordinary conditions, the story will spread at a rate of one new believer per day.

This spell cannot be recast by the same wizard or cleric while a previous enchanted story is still circulating. 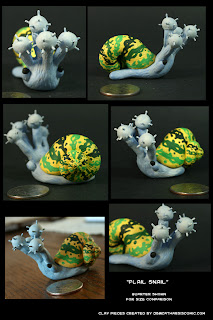 In other random-inspiration news, I walked the dogs today.*

Ok: Gerard De Nerval used to walk a lobster. This, in turn, was, I believe, derived from the practice of aristocratic women of earlier centuries walking lobsters as a show of conspicuous time consumption.

Implying they have breeds, varieties, subspecies of flail snail. And painted shells. And beadazzled shells.

Common expression in Vornheim: I wish I could walk that lobster. Meaning, like, to expend effort on a frivolous task.
____________

Also, Mandy watched Warlord with Jet Li. It is chock-full of D&Dable ideas. I hesitate to enumerate them here lest it prevent you from being forced to watch it yourself.
___________
*(Bug and Drax The Destroyer).

I really can't express how much joy your blog brings me. Thanks.

Check out that snail!

I really, REALLY like Viral Lie. It could get quite ridiculous. As a GM, just how far would you allow it to go? I mean, if worded properly, the Cleric or Wizard could end up an un-killable god!

@evapilotone
I don't see how that could happen if the DM had any brains at all, since the DM has total control over exactly how the exaggeration manifests.

Lavysh Rhynstone, Beadazzler of Distinction and former jeweler of the Fortress of Crows, has joined with Pyn Stryper of #1 Longbristle Lane, to bring their immense talents together to indulge the æsthetics and edify the discriminating flail-snail clientele of the Grey Palace and the Eminent Cathedral areas.

No snail too small, no flail too dull, no line too fine!

GREAT! Wonderful idea for a spell has lots of potential to be super fun. You could make it even more fun if the group played Telephone with the rumor with each person and retelling representing a day. Talk about crazy results!

Why the huge disparity between the Wizard and Cleric levels?

Higgipedia-- I think it is a joke on the nature of religion. You know, Jesus is this hippy who opposes wealth & racism, & then the next thing you know Saul...I mean, Paul is all "& he walked on water!" & Peter is like "there was a...he...he came back from the dead!" & Luke is like "right, but he was all bringing dudes back from the dead left & right, like that Lazarus guy!"

Also, how did I never know about walking lobsters?

That flail snail deserves to a mold so that it can be cast and sold. It is really something!

You named your dogs after Guardians of the Galaxy? But not the one that actually is a dog...

I was thinking of the '70s version, before the Guardians had a comic book, actually...

Ah, the flail snail, a.k.a. Slug Beat Your Face, to use a turn of phrase from Thunderbolt Mountain

"It does not bark, and knows the secrets of the sea."

Well the current team anyways. Though did Micronauts come out in the 70s?

Oh and the pet micro-flail snail is a wonderful campaign flavor idea...

FLAIL SNAILS ARE THE BEST!

Thanks for all your writing and podcasts, by the way - I'm a huge fan.