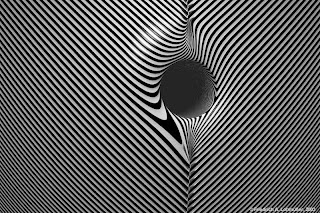 How many times have you heard this one form some smiley guy:

"You can get inspiration for adventure ideas from anywhere."?

I am going to try it. I'll start with my bookshelf.

A random book: "A Void" by Georges Perec, translated by Gilbert Adair. It's about a lot of things--the main deal, though, is it has no letter "e" in it. In the original French or in translation.

Anyway, circa page 5 here's my favorite part. Poor insomniac Anton Vowl, examining the patterns in his rug, desperately seeking some meaning in it.

"For four days and nights Vowl works hard at his oblong rug, squatting and crouching on it, languishing and lying in ambush, straining at his imagination so as to catch sight of its missing strand..."

This item is a seemingly ordinary black and white rug possessing an intricate pattern, anyone looking at it...ok...a series of wisdom rolls or perception checks and if you fail one you gain an insanity, if you make them you gain a point of wisdom or you gain a vital insight into the nature of some in-game mystery one time.

If you manage to gain a wisdom point and then keep going and gain an insanity after that then--and only then--can you unlock the rug's true and transcendent metaphysical secrets--which should allow you some thoroughgoing grasp of some major bizarre thing underlying the entire campaign. Like: Mount Vrothgeist is the shape it is because creatures from the stars carved it that way with light beams. (Of course everyone will think you're crazy and because the DM already gave you an insanity, not even you, the player, know if this "insight" is actual real campaign info or if it's just a delusion your PC now believes to be true.) Keep staring at it and things get multi-planar: a demon from another world begins to build a home for itself inside your mind or a portal to another plane opens or nonEuclidean beings from Zrgyvvle begin to climb through. Et cetera. Maybe make a chart.

Let's see if we can build an adventure around the rug. Ok, not so hard, really. The Duke/King/Queen/local wiseman/eccentric PC friend is behaving erratically, won't leave his/her room (which has the rug)--or won't stop visiting some local drinking establishment which has this rug--everyone who investigates starts to behave strangely. Various crimes or improprieties result. PCs are called upon to investigate. That's a decent one-shot in a castle or urban environment or a Cthulhu thing.

All you really need is a middlingly-complex environment with a few hazards--multiple rooms, moat, fireplace, some stray weapons, high roof, and then release a few insane people and possible interdimensional effects/interlopers into it... That's cake.

Maybe try another one soon...

Excellent. I like it alot. I'm going to try this myself.

This is a great meme; I might try it. I did that "visual influence map" meme yesterday though, & it almost destroyed me. Still, this I can handle.

Anyhow, to ME, Zak + "A Void" = language gimmick, like the backwards talking goblins. Maybe mindflayers? Something weird, thoughtful-- they just don't understand the players if they use words with e in them.

Of course, the few times in my life I have tried the "no E" game, I've been a giant failure at it; I can't keep it together! Though to be fair, alcohol was involved in each attempt.

Really nice, the objet itself has a touch of the hellraiser cube. I like it, sounds sick...