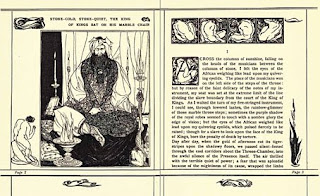 -Austin Osman Spare: One of my Cthulhu players clued me in about this guy. A real-life CoC character. Artist. Wrote grimoires. Pictures drove people insane. Beloved by notorious dictator.

-When Keith was in town we went to Aero Hobbies and he picked up some hit-location dice. I kinda wish I had, too. I love random die charts, but I like dumb gimmicks, too. Especially dumb gimmicks which replace having to find one more random chart. 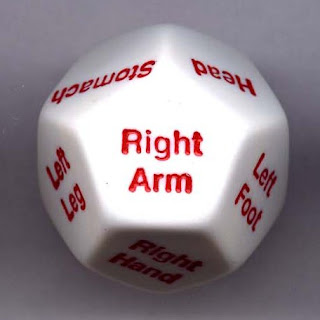 -That idea TM me, today.

-Mandy's on an epic medieval Chinese movie kick right now. In "The Emperor and the Assassin" a handful of guys roll a big (6-9 foot diameter, I'd say) iron ball up to a door and use the ball to knock it down. Does anybody out there know if this thoroughly rad and seemingly terribly impractical form of battering ram was ever used historically?

Austin Spare is a bit character in Alan Moore's Promethea. He and Crowley both appear.

Well, there's the demolition ball style approach, which were sometimes used in sieges, but that's not really the same thing. So no, can't help. Sorry.

I have added that film to my rental list though, so thanks for that!

Another fun fact about Austin Spare: Crowley didn't like him; he called Spare a "black magician". That's a whole bunch of interesting wrapped up into a tight little bundle.

Spare's Zos Kia Cultus is an interesting and trippy magickal philosophy. Not the easiest books to decipher and absorb. Some of the coolest drawings ever, though.

I made Austin Osman Spare into a character for the WitchCraft RPG. As we used to say, weird wild stuff.
http://timbrannan.blogspot.com/2010/09/chaos-magick-for-witchcraft-rpg.html

Pretty sure no-one ever used the roll-an-iron-ball-battering-ram up to the door historically as a siege device.
I'm certainly willing to believe a group of random folks who needed to batter down a sturdy door may have used one as an improvisation.

The pole-style battering ram (or better yet a drill) is just far too superior a tool to the 'human cannonball'.

While I've not seen the film do the door-breakers just grab a large ball that happens to be handy, or is this a purpose-built ram?

Why exactly would anyone make, much less have, a gian iron ball lying around?

A giant ball of twine, sure, but iron ball?

I think the ball had two major problems. First, if it did not break the door on the first try, getting it up to speed for another try would be non-trivial compared to a ram. Second, the ball is more dependent on the angle of the ground than the battering ram is, and since defensive positions tend to be on the higher ground the ball will not have much force to break through.

However, that being said I like the idea and in the right setting and (let's say a vehicle-mounted) ramp being used to power a steel ball would really be awesome. Imagine being surprised by the force of a man-sized ball breaking through the door followed by a number of shock troops.

(Had to delete my last post, the link did not work)

It appears to be purpose-built ("purpose-cast" I suppose). It's painted with magic chinese good-luck patterns and all that.

My dear Mr. Zak, the following link regarding tungsten may be a point of departure for you in the ball department:

"In the ball pen, Tungsten is even present in the most important part - the ball of the pen. This ball is made from Cemented Carbide. Such balls have a diameter of less than half a millimetre up to more than one millimetre. In Asia people like to write with finer lines, while in America they frequently use the big balls."

Don't they! Obviously you'd scale that up even further for a siege weapon.

Also a potential game element on the first page:

"Dressed up, he passes quietly the rooms of the kids where an energy saving lamp - with electrodes made from Tungsten - has burnt the whole night. The little daughter is still so chicken-hearted, he thinks to himself."

That and some early Doors tunes and you have a campaign.

The battering ball is *obviously* hollow. 18 inch walls would allow for a much more practical, and still durable, giant magic globe of doom.

@Talysman, thanks for that. Made my day.

Gratuitous Saxon Violence: "So about 2:30am I realized I couldn't sleep because I calculated a 7-1/2 foot radius sphere."

that dice is fantastic!!! where you have buy it?

Has Mandy seen " The Blade? It's one of the best medieval Chinese kung fu films ever. beautifully shot and gritty. Here's the trailer:

And of course there is the epic Master of the Flying Guillotine.

Hey Zak, could you post some more info about your Call of Cthulhu games? I just bought the rulebook and I'm super excited. I'd love to hear more about how you bring your awesome DM (Or I guess Keeper) style to horror gameplay.

I suppose the ball could have been cast as the head of a ram to be constructed at a city's gates, though it seems that having a hole to fit the pole into would be wise.

Anyway, while I can't prove a negative, I CAN report that after a day spent checking sources, both online and off, this method was certainly never popular, or commonly reported in the historical records. Sorry, looks like a case of creative license on the part of the movie-makers.

Someone beat you to it, making a RPG that requires collectable dice. I've never put the work in to actually make all the dice necessary to play, but I'd like to.