"These were volumes compiled by many wizards of the past, untidy folios collected by the Sage, leather-bound librams setting forth the syllables of a hundred powerful spells, so cogent that Turjan's brain could know but four at a time.....He stared down at the characters and they burned with an urgent power, pressing off the page as if frantic to leave the dark solitude of the book."

"Spells are almost alive with power. Memorizing a spell is kinda like putting a demon in your head."

Wizards are highly-skilled professionals--the networks of neurons and myelin in their skulls have been trained throughout years of apprenticeship to grow and branch into bizarre knotted geometries capable of encasing and enclosing unnatural forces. The bio-mystical energies needed to bind dweomers to the earthly plane have been known to persist in the minds of magic-user eons after death.

So, naturally, while spellbooks are all fine and good, what your real heavy-type avant-garde alchemonecromancer wants to get his or her hooks on is brains. Wizard brains, mostly. The hardest-core work in the field is digging up long-dead sorcerer-kings of ages past to extract the formulae for long-lost spells of the oldest schools (like, say, sleep from before it got a saving throw) but fresh brains have their uses as well.

Some uses for the brains of dead wizards:

-It is possible to "read" the spells remaining inside a dead caster's brain in order to copy the spells into a spellbook or onto a scroll. The ritual can be learned by a necromancer at 4rd level, by an alchemist at 2nd level, and by any other arcane spell-caster at 5th level for an x.p. cost equal to 1/5th of the x.p. required to reach the next level in whatever system you're using. This can only be done on a full moon at the end of day upon which the mage performing the ritual has shed no blood.

-Any alchemist of 3rd level or higher can "pulp" the brain--that is, use the brain to create a potion capable of replicating the effects of whatever spells were left in the caster's mind at the time of death. However, if the brain has not been "read" first, there is no way of separating one effect from the other, so the prepared potion will simultaneously produce effects matching all the spells contained int he arcane brain.

-The proper application of embalming fluids and electricity to a brain can cause it to release any spell memorized but uncast at the time of death. The secrets of this process may be learned by any arcane spellcaster at level 7 for a cost of 1/3rd of the x.p. required to reach the next level of experience in whatever system you're using (alchemists can learn it at 3rd level for the same relative price). The mage will have to supply his or her own electricity. There is no limit to the level of the spell that can be "liberated" by this means, but setting loose a spell higher than the caster's level results has a 10% cumulative chance per level above the caster's allowed casting level of causing the spell to misfire (or overfire) in some entertaining way. 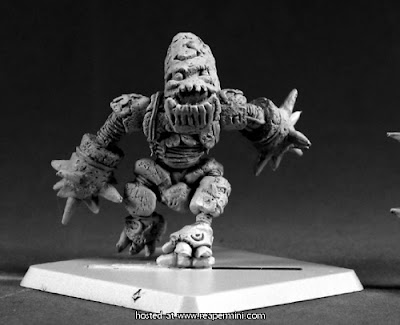 -Certain kinds of rune-etched brass golems can be powered using the brain of a deceased spellcaster as a sort of battery. These golems can cast whatever spells were left in the brain at the time of the caster's death. They can also be "recharged" with new brains at any time. (Enn-Zinn the Undecipherable has been discreetly harvesting the minds of sorcerers via a network of assassin-nightengales for forty years in hopes of one day powering an unstoppable army of brass golems kept in a chamber deep beneath the Red Palace of Emperor Claw is what they tell me. But, y'know, they say a lot of things, so whatever.)

A blue dragon can cast (some say "only cast") spells contained within any brain they've eaten.

High level sorcerer brains (15th level+) are so steeped in occult and space-folding mathematical sciences that they can actually be used to trap demons. The minimum level of the brain required to do this is 15 + (HD of demon to be trapped).

________
Yes, that's a Reaper Miniature and, yes, they sponsor our TV show. If you spent your days getting boxes of free miniatures all the time you'd probably start to like some of them, too.

Ooooh so that's what that brass monster was...

@mandy
actually, no, that was an emaciated ancient millenia-old cleric of Vorn inside a rusting suit of magical steampunk armor that keeps him in suspended animation until the temple is threatened. He's been there ever since the war which buried the temple to begin with and has no idea what year it is or that all his pals are dead.

Okay, I'm definitely swiping this one for my next D&D game.

Frickin' fantastic! I'm definitely going to use this. Thanks for posting.

perhaps when you're done with it, i could feed it to my blue dragon?...

I like the idea of wizards' brains being physiologically altered by the process of learning spells. Reminds me of Charles Stross' "basilisk gun," which works via a circuit based on the brain abnormality that causes gorgonism.

I've been trying to rely solely on my own ideas and resist using any of your ideas, but this one may prove too tempting.

You could also postulate that a wizard's brain could represent the medieval equivalent of unexploded ordinance, which could mean that dead wizard you've got on your corpse table could be just as much a "trap" as a "treasure".

Jostle a that oddly robed corpse the wrong way, get a fireball, or a cloudkill, or something like this: http://bigfella.com/violent.dir/brain.jpg

One could imagine that more populated areas that where wizardry is practiced would have the equivalent of France's démineurs, teams of guys who go around properly disposing of a wizard's remains.

(Amazingly, Wikipedia tells me the démineurs dig up about 900 TONS of old artillery shells, some with mustard gas and other chemical agents, every year in the Ardennes.)

You could build a campaign around that kinda thing.

Cool idea. Reminds me of:

Walt Simonson's Orion #4. Darkseid clones a dead guy who had the "Anti-Life Equation" stuck in his head. Result is a titanic-sized obese zombie thing with his brain mostly scooped out and supported by unearthly machinery. Link here.

Now that's mighty tasty, I'm swiping this!
I also like BigFella's idea of wizardly corpse as unexploded ordinance. I'm gonna keep that too.

i love the anti-life equation.

i also have that issue, though i only read it when it came out so i wouldn't have been able to tell you who that guy was.

didn't he think jimmy olsen had the anti-life equation for a while?

At this point even Bat-Mite has had the anti-life equation (yes, it was in Elseworlds, but still).

@zak: I don't know any more about it than that myself. Not an in-depth DC guy, but I love Walt Simonson (Thor) and the Timm/Dini TV cartoons.

Apparently that character was called "Billion Dollar Bates", from a story by Kirby in 1972; sounds like first guy in DC to be said to have the equation.

This and the "Snakes are Books" post are probably two of the most inspiring posts I've found on the internet. Wizard's finding spells are a prime drive in games I run and I love throwing out obscure spells (I've done cave paintings, oral histories, the usual scrolls, books, tattooed skin that needs to be flayed first, etc) and this is pure win.

Your blog never ceases to amaze.

Awesome. Thanks for the hook/baddie idea for my next BtVS game, Zak (w/ regard to the golem). I was actually reminded of Hellboy and a couple of his nemeses.

Tres cool. Kind of reminds me of "Creatures of the Night" brainworms, which live in the brains of evil people and contain their thoughts. If I remember correctly, the most common way to gain access to the stored thoughts is by squeezing the liquid from the worms' disgusting bodies, then drinking it (which results in either hearing the dead villain's thoughts or in a severe case of nausea. Or both).

How exciting. I can't help but imagine a mad archvillain taking advantage of this to build a towering artifact tank that fires spells from the wizard brains he uses as ammunition.

It would walk, of course, on 4-8 spindly legs and make the most horrible ratcheting, clicking, whirring sound as the unnatural gears that drive the monstrosity spin through powerful magics.

The adventure could begin as a murder mystery. The local constable is flummoxed as to why so many healthy young wizards are turning up with their skulls neatly sliced open. The blame, naturally, would turn first to some scapegoat. Ghouls perhaps? The nearby tribe of goblins with whom the village has long since endured having no cause nor militia to remove them.

If the party has a wizard she would, naturally, be kidnapped at some point.

The penultimate piece in this drama would be a race to the bottom of a crypt where a legendary sorcerer was entombed. Encumbered by the archvillain's minions—perhaps even those same wizards from earlier, animated by powerful necromancy?—the party would, again naturally, arrive just moments too late and be forced to face the villain's horrible masterwork.

Perhaps a psychic character could even speak to one of the brains and talk it into one final sacrifice? Even better if that brain happens to be the same character who was kidnapped earlier and the party arrived just a moment too late.

Makes me think of a Neh-Thalggu from 2e Edition - a creature from another dimension whose sole purpose was to steal brains... and which stolen brains could be used as though it were its own, including any memory they contained...